From the slowcoach in the fast lane to the excessive flasher, here are five types of drivers anyone who lives in Dubai will recognise…

They’re in a white sedan. They drive at <80 km per hour in the fast lane on Sheikh Zayed Road with the ease of someone on a leisurely country drive. They’re also clearly masters of mindfulness meditation because they remain completely oblivious to the chaos they’re causing on the highway. They’ve mentally blocked out the dozens of SUVs flashing them, swerving past them and just generally sending road rage energy towards them. They’re annoying, but one can’t help but admire their blissful ignorance. Do they float through life this unaffected by others?

They live in a suburban mega villa and drive a car that’s the shape of an aubergine and an entire little league team can be jammed into. They look innocuous, but oh no. Catch them on the day that Spinneys didn’t have the Rachel’s organic yoghurt with honey that they like in stock and things get very real, very quickly. You gingerly start to pull out of your car park, meaning they have to pulse their brakes for a millisecond. This leads them to honk their horn for 75 straight seconds while just sitting there so none of you can move. Their wrath is frightening, yes, but cut them some slack because deep down it’s all about their Dhs3,000 DEWA bill this month, the fact school fees have just gone up 20 per cent and Debra on the PTA signing them up to supervise yet another mind-numbing craft table at the school fair.

NOW READ
*The five types of second-hand buyers in Dubai*
*The Dubai Pose: An epidemic*

It’s 6.45pm on a Tuesday. You’re driving at an ample speed and there’s a line of cars in front of you so you literally could not go any faster without either causing a 10-car crash or shapeshifting your Kia. Next thing you know a tinted-windowed-Lexus appears, as if by magic right on your bumper. Flash. Flash. Flash. Flash. Is someone giving birth inside this excessively aggressive vehicle? Probably not. At first, the bullied kid inside of you stays put, indignant while they rev up to mere millimeters behind you. But then, genuinely fearing for your life you pull aside, a little defeated. To pour salt in the wound the Lexus leaves the lane they’ve just muscled into five seconds later to take the next exit. This fires you up even more. They don’t care. 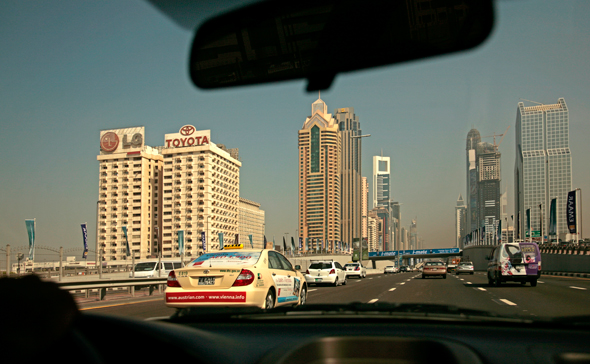 Don’t even try and fight the flasher on Sheikh Zayed Road. It’s not worth your mental energy.

It’s branded with a sticker that asks you to call a number if they drive badly and yet this minivan still takes corners like a hopped-up Jenson Button. “Brake on the straight, brake on the straight,” you yell within the confines of your car as they burn into the turn, take to two wheels and look like they’re going to topple over. They also appear to be fingerless and so unable to operate indicators. Plus, they clearly think roundabouts are a pick-n-mix-your-lane free for all. Basically, steer clear.

It’s not all bad though… every time you get stuck in the sand in Dubai a truck magically appears within minutes carrying helpful men ready to shovel you out of the hole you’re literally buried in. These helpful salwar kameez-clad elves disappear as quickly as they materialise. As you begin to form the words “thank you”, they’re gone, job done. You’re left sweaty from being out of your car for longer than 30 seconds, delighted to no longer have a tire buried in a dune, slightly bewildered by the whole experience and wondering if it was all a dream.

News
Transport
Travel
EDITOR’S PICKS
Here's the full list of UAE public holidays in 2023
READ MORE
23 incredible things to look forward to in the UAE in 2023
READ MORE
Hidden gems: 10 UAE desert pop-ups to discover this winter
READ MORE
Where to travel in 2023: 10 new flight routes from the UAE
READ MORE
MOST POPULAR
Miami Vibes Food Festival is returning to Dubai this weekend
6 brilliant things to do in Abu Dhabi this week: Feb 6 to 9
This stunning new wellness space will open in Dubai next month
Dubai tourism increases by a massive 97 per cent
16 incredible mega projects coming to Abu Dhabi soon
YOU SHOULD CHECK OUT
Our website uses cookies and other similar technologies to improve our site and your online experience. By continuing to use our website you consent to cookies being used. Read our privacy policy here.