This guy actually swam with a huge whale shark in Jumeirah

If a whale shark briefly spotted in Dubai Marina last year almost broke the internet, we can only image what this guy will do.

Our local waters are a bit of a breeding ground for whale sharks – however before you start imagining a Jaws-type scenario, there’s a new video that proves just how harmless they are to us humans.

In fact, local resident Nick Watson spent around an hour playing with one of the creatures in the shallow waters of Jumeirah’s Open Beach.

The clip, posted on Facebook over the weekend, shows the Dubai-based father larking around with the six-metre-long fish in what he calls a “very special, magical day”.

“People keep asking me if I was scared at any point, but I was far from scared,” Watson told the Khaleej Times. “[The shark] was completely relaxed and so placid.”

Watson and his family encountered the curious creature on the beach across from Mercato Mall at about 8am on Wednesday 14 September, after his wife Delphine initially spotted its fin poking out of the sea.

And rather than scream and hide (like we would), all Watson – who at first believed it might be a dolphin – thought was, “this is something I have to go and explore”.

The couple are known for their sporting pursuits (although this might be the most thrilling yet), as they frequently compete in events with their daughter Tia and son Rio, the latter of whom suffers from a rare chromosomal disorder.

The two-minute video posted to the family’s Team Angel Wolf Facebook page has so far racked up more than 16,000 views.

In it, the playful critter splashes around with and swims alongside Watson, who says he “showed [the whale shark] my full respect, letting it lead the way”.

The Arabian Gulf is thought to be a breeding area for the largest fish in the world, so this isn’t the first time one of the beautiful and docile creatures has been spotted in the UAE (in fact, far from it).

Last year a whale shark was spotted navigating the waters just below one of Dubai Marina’s pedestrian walkways.

While intimidatingly large – they can reach lengths of up to 12 metres, the same length as a large school bus – whale sharks are actually harmless, eating plankton rather than people. 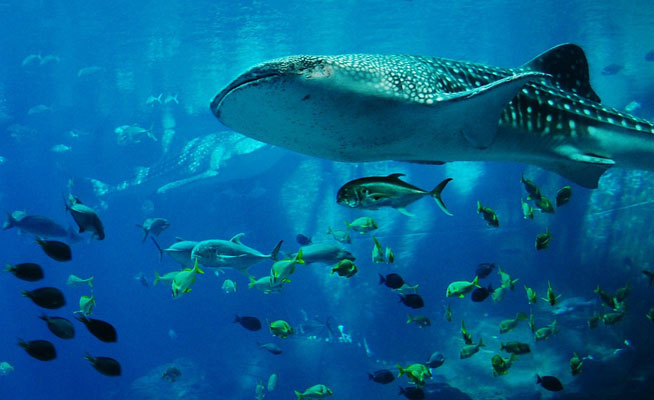 – The pattern of spots around the shark’s gill are unique to each individual, similar to our fingerprints.

– A whale shark’s mouth is over a metre wide.

– Their only known predator is humans.

News
Outdoor
EDITOR’S PICKS
Covid-19 rules in Dubai: all the updates you need to be aware of
READ MORE
9 royal-approved Dubai restaurants
READ MORE
16 of the best beach bars in Dubai for sundowners
READ MORE
Where to get the Covid-19 vaccine in Dubai, Abu Dhabi and across the UAE
READ MORE
MOST POPULAR
Join us for a preview of Fairmont Bab Al Bahr's Valentine's dine around
Four reasons why you should check out Asil this month
Win a BMX in the new Hudayriyat Circuit X youth time trial event
Hello, Glo: The new bar and lounge now open in DIFC
The luxury hotels and residences open and opening along West Beach
The Tent: Bla Bla Dubai launches more bars for a day to night experience
YOU SHOULD CHECK OUT
Our website uses cookies and other similar technologies to improve our site and your online experience. By continuing to use our website you consent to cookies being used. Read our privacy policy here.