More on 'Meydan One' - Dubai's most ambitious project ever?

At Cityscape this week Meydan released more info on the mega mall that will be part of the project. Here’s what we know…

Dubai doesn’t do small. It’s a place that likes things bigger and bolder.

Already home to the world’s largest dancing fountain; tallest building (Burj Khalifa); largest artificial islands (the Palm Islands); and biggest natural flower garden (the Miracle Garden), then there’s Meydan One, which features even more superlatives and is arguably the emirate’s most ambitious project ever planned.

Developer Meydan has announced the launch of Meydan One featuring a 711m-high residential tower, a huge new mall complete with a retractable roof, the world’s largest indoor ski slope, a 25,000 sq metres indoor sports facility, the biggest dancing fountains in the world, and a beach.

Located between the Meydan Hotel and Al Khail Road, the project is scheduled to be completed “before 2020”, according to statement from the developer.

THE MEYDAN ONE MALL 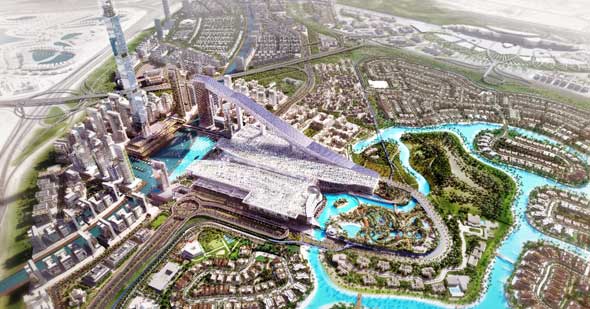 The mall will be made up of 30,000 square metres of indoor and outdoor space – with 529 retail stores, including two major department stores.

The huge shopping centre will have a retractable roof (as will the new and improved Ibn Battuta) that will be opened in the winter months to create an alfresco space. In fact, there’s a sample model of the roof at Cityscape this week if you want to check it out. 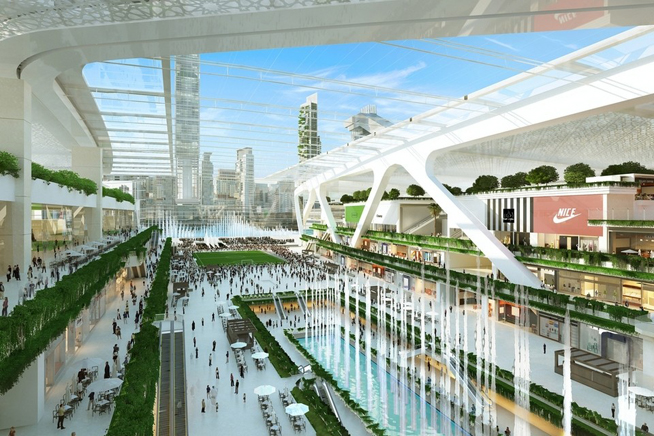 There will also be a golf driving range and the chance to ski and snowboard on the one-kilometre-long ski slope, which you can see in the picture above. It will be the world’s longest too: Ski Dubai is 400-metres-long.

Outside there will be football pitches, mountain biking trials (fake mountains we’re guessing?) and running tracks. There will also be a skateboard park, a BMX spot and what looks like a kayakable lake:

Oh, and the mall will be home to the world’s largest dancing water fountain, which will be 400 metres wide and 100 metres high (Dubai Fountain shoots water 152 metres into the air but is only 275 metres wide). 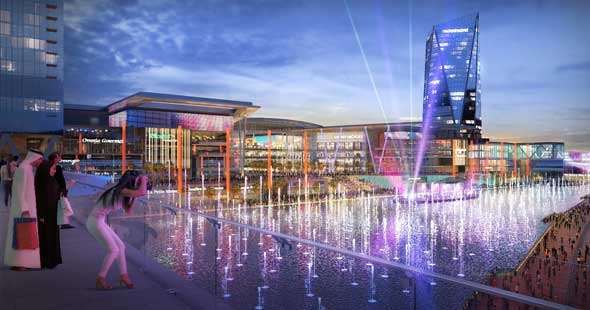 The Mall will also have 90 food outlets, a 20-screen cinema and a 400-metre Central Canyon (we’re not sure exactly what that is but we’re imagining it’s a trough of some sort) flanked by luxury stores.

WHAT ELSE YOU’LL FIND THERE

The Dubai One, expected to be the world’s tallest residential tower, and its connected podium will include almost 900 residential apartments and a five-star hotel. 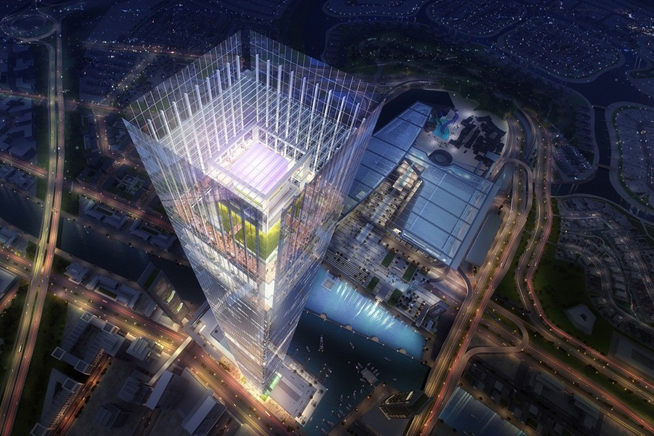 There will also be a yacht club and an indoor multi-purpose sport facility with a 5.3 kilometes of bicycle and jogging trails. Meanwhile outdoors, you’ll find tennis, football, basketball, volleyball, a baseball batting cage, lacrosse, and hockey facilities.

There’s even plans for a beach in the heart of the city. The 300m long beach will offer visitors swimming, paddle boats, sea kayaking, beach volleyball as well as direct access to a new waterpark.

“This development is a forward thinking, interactive enterprise geared towards the Dubai of tomorrow. The encouragement and support we have received in the past from our trusted partners will now help the Meydan One development come to life. The first phase will be completed as Dubai prepares to host the World Expo 2020,” said Saeed Humaid Al Tayer, Meydan’s Chairman.

News
Things to do
EDITOR’S PICKS
Ramadan in Dubai: 48 iftars to try
READ MORE
Where can Dubai residents travel? Check out these 14 destinations
READ MORE
Rumours, facts and reveals: New Abu Dhabi bars and restaurants
READ MORE
UAE announces reduced working hours for Ramadan 2021
READ MORE
MOST POPULAR
The UK and eight other countries added to Abu Dhabi Green List
Breaking: Flights from India to UAE suspended for 10 days
A sweet new Japanese restaurant has opened in The Greens
Book a Yas Hilton Ramadan stay and play package from Dhs396pp
There's a cool new coffee shop to check out in Dubai
YOU SHOULD CHECK OUT
Our website uses cookies and other similar technologies to improve our site and your online experience. By continuing to use our website you consent to cookies being used. Read our privacy policy here.