José Carreras warms up ahead of Dubai Opera performances

The legendary Spanish singer is taking to the stage for two performances as part of his final world tour – and there are still tickets up for grabs.

José Carreras’ appearance in Dubai is bittersweet. Performing his A Life In Music show, tonight and again on October 8, this is both a comeback and farewell tour for the legendary opera singer.

The 69-year-old has sold well over 75 million records during his 45-year career and in this performance he’ll take the audience through those decades with a variety of songs, from Catalan folk music to American hits. 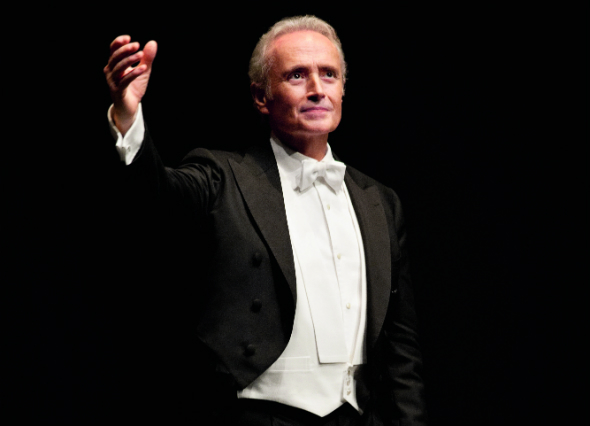 As far as life stories go, José Carreras’ is worth singing about. Born into Francisco Franco’s Spain, by the mid ‘70s the Catalonian was a leading tenor worldwide. He fought off leukaemia in the late ‘80s, before helping bring opera to the masses alongside Placido Domingo and Luciano Pavarotti in The Three Tenors a few years later.

More culture news:
*Etihad Museum is going to open by the end of the year*
*These musical heavyweights are coming to Dubai*

In his earlier years Carreras turned heads for his roles in operas such as La Bohème and Madame Butterfly. Sadly his career was put on pause in 1987 when he was diagnosed with cancer. Despite being told the worst, he fought the disease and then created the Josep Carreras Leukemia Foundation (using his Catalonian name), dedicated to finding a cure.

Soon after, he teamed up with fellow tenors Domingo and Pavarotti, famously performing at the 1990 FIFA World Cup in Italy – an idea that Carreras (a big football fan) credits himself for thinking up. Intended to be a one-off, the trio were so popular they performed for years.

“Of course there was rivalry, but it was healthy,” Carreras recently reminisced. “The Three Tenors did a lot of good for opera as an art form, introducing it to people who weren’t familiar with this kind of music.”

The singer’s been taking things easy the last decade, but is back in what is likely our last chance to catch the legend in action.

Culture
News
Theatre
EDITOR’S PICKS
13 Sheikh Hamdan-approved restaurants in Dubai
READ MORE
Dubai brunches temporarily banned in new preventative measures
READ MORE
12 upcoming Dubai mega-projects we can't wait for
READ MORE
17 of the best beach bars in Dubai for sundowners
READ MORE
MOST POPULAR
Wizz Air to launch Abu Dhabi to Tel Aviv flights from Dhs99
8 places to catch the Indian Premier League in Dubai
Emirates flight tickets can now be rebooked within 36 months
What’s On The Bookshelf: 3 feel-good fictions you have to read
Review: Hickory's Friday brunch at Yas Links Golf Club
YOU SHOULD CHECK OUT
Our website uses cookies and other similar technologies to improve our site and your online experience. By continuing to use our website you consent to cookies being used. Read our privacy policy here.