It was here, then it was gone, now it’s back! Getting to and from metro stations in summer just got easier…

Remember how we told you about U drive, the pay-by-the-minute car rental service in Dubai? But how it then went on hold due to regulation issues?

Well, it’s back and is affiliated with the RTA so you can now rent a car for between 40 or 50 fils per minute (aka, around Dhs24 to Dhs30 per hour). When does it start? Today! There are now 200 by-the-minute rental cars on the Dubai roads.

U drive will have an initial fleet of 100 cars around Dubai, as will rival service Ekar.

One of the main aims of the cars is to allow people a way to get to and from metro and bus systems during the hot summer months. Because, let’s be honest, a 10-minute walk from the metro to your office is lovely now, but impossible in August (that’s where U drive and Ekar comes in). We have bad news for those working in Tecom areas, however, more on that soon…

Where will the cars be? Well they’ve initially been deployed in 45 locations, with a strong concentration of cars in five main locations – Rashidiya, Burjuman, Ibn Battuta, Union, and Business Bay metro stations.

The RTA will monitor the usage initially and will beef up numbers of cars in any areas that are seen to be busy. We imagine it will also be a great option for tourists visiting the city.

The RTA will “also mull over the provision of the service using environment-friendly electric or hybrid vehicles,” explained H.E. Mattar Al Tayer, the RTA’s chairman.

There’s one catch however, there are still places in Dubai where you can’t park the cars – Dubai Media City, Internet City, Knowledge Village and Deira Fish Market. So if you work near either of these, you’ll have to go further afield to find your car, and then you’ll have to park it elsewhere before you finish your rental period. This is extra frustrating for Media City workers considering the sand lot there is now pay-per-hour parking.

SO HOW DOES IT WORK AGAIN?

Here’s a reminder of how U drive works – head here to read more about Ekar.

First you download an app, pay a Dhs20 monthly membership fee and then book cars near you via the app. You can then open the cars with your phone (ah, technology). Once in the car you’ll find the key in the glove box, after you ‘unlock’ the key with a pin code sent to your app, the charge of 50 fils per minute starts (you’ll be charged only 40 fils if you return your car to where you found it – apart from Dubai Media City, Internet City, Knowledge Village and Deira Fish Market). The charge stops when you’ve parked and the key is locked up again. 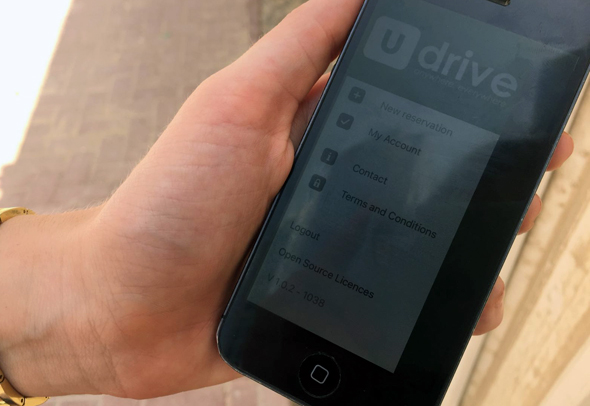 The fee of 50 fils per minute adds up to be Dhs30 an hour, but if you use the car for longer than six hours you’re charged a penalty of Dhs350. So make sure you only use it for a short period.

Someone who has tried the service says a trip from JLT to Mall of the Emirates cost them just Dhs8 – although, because it’s by the minute, this is obviously very traffic dependent.

There’s a similar service in London, Go Drive, that costs 89 fils per minute. 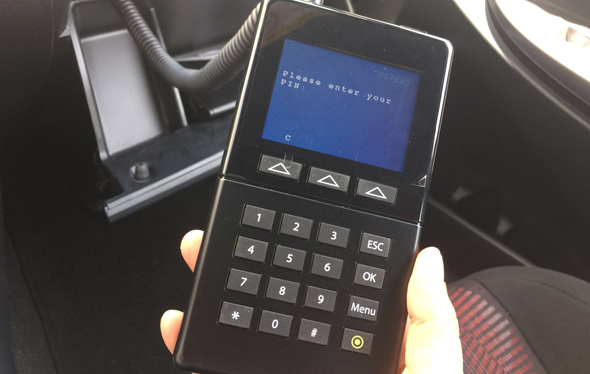 The by-the-minute Dubai rental cars are Toyota Yaris models, and the company currently only has 100 cars.

*GOOD NEWS: Soon half of all Dubai taxis will be hybrids*

As you get into the car you rate its cleanliness, and check for any damage. If there’s a problem with the car, one of the 20-or-so-strong service team will come out and see to the issues. Head here for a full list of fees.

And what about if the car’s low on petrol? There’s a VIP sticker by the petrol tank that means you can fill up at any ENOC or EPPCO station while driving the car for free. Just don’t try and do so in another brand of station, as you’ll have to pay. Because udrive know that filling up will take time, they’ll reward your account with a free 20 minute drive if you ever fill up a tank. 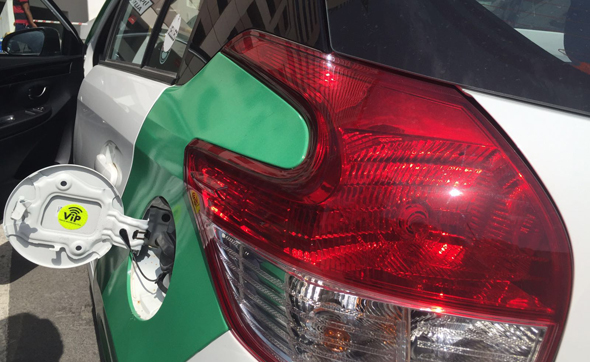 The VIP sticker means you can fill up petrol for free at any ENOC or EPCO.

Here are some of the costs involved…

– Per minute charge of 50 fils (this includes fuel, and public parking charges – except for in Dubai Media City and Deira Fish Market). This means it’s Dhs30 an hour.

– Traffic fines – you have to pay for the actual cost of the fine, plus Dhs50. 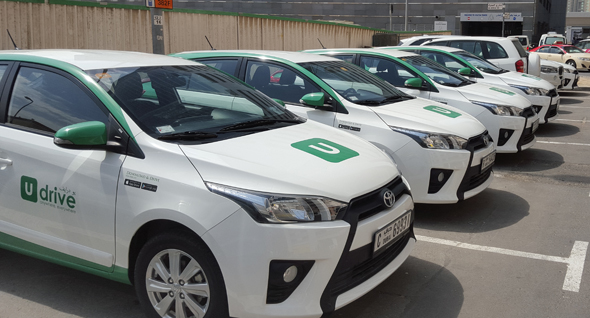 A portion of the fleet

What about signing up?

– Download the app from Google Play or Apple App Store, then click register now. A browser window will then pop up where you’ll need to upload your driver’s license and Emirates ID. You’ll also have to input the expiry date etc. of your Emirates ID and License (we were a bit tripped up when it asked for the issue date of our Emirates ID as it’s not written on the card, but just count back the years to figure out what it is).

– You’ll then get sent an email to put in your payment details, et voila, you’ve soon got an account and can straight away reserve a car. Once you reserve the car via the app you’ve got 15 minutes to get to it before your reservation is cancelled. If you need to reserve a car in advance call 800-837483 to book.

– For more on the car service visit udrive.ae.

News
Transport
Travel
EDITOR’S PICKS
Ramadan in Dubai: 50 iftars to try
READ MORE
Where can Dubai residents travel? Check out these 14 destinations
READ MORE
Rumours, facts and reveals: New Abu Dhabi bars and restaurants
READ MORE
UAE announces reduced working hours for Ramadan 2021
READ MORE
MOST POPULAR
A four-day ultra marathon is taking place in the Dubai desert
Put the pedal to the metal with free tickets to Ekart Zabeel
Etihad drops massive summer sale with up to 50 per cent off flights
Spend your summer in a snowy cinema in Dubai
Tipsy Lion reopens with wallet-friendly deals all week
YOU SHOULD CHECK OUT
Our website uses cookies and other similar technologies to improve our site and your online experience. By continuing to use our website you consent to cookies being used. Read our privacy policy here.