A Dubai version of Monopoly is soon to hit the shelves

Who doesn’t love Monopoly? Well now we have Dubai-opoly…

Over a game of Monopoly people can reveal their true character. Family members you once thought trustworthy turn into greedy, money-hungry fat cats. Evil grins creep across faces as people unwittingly stumble across ridiculously-priced hotels.

If you’re a fan of the themed sets, well we’ve got news for you…

Dubai-Opoly is soon to hit the shelves throughout the GCC. Yes, it’s a Dubai-themed version of the much-loved board game, complete with the emirate’s most prominent landmarks and attractions for you to set up shop. 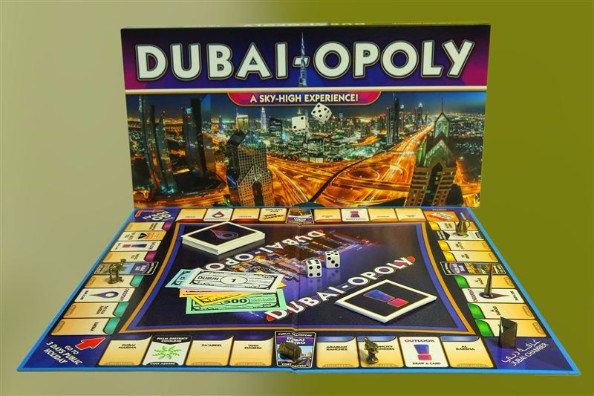 ‘You’ve landed on my Burj Al Arab. That’ll be a squillion dirhams thanks…’

Among the neighbourhoods and attractions featured in the game, we know that Umm Suqeum, Za’abeel, Dubai Marina, Arabian Ranches and Al Barsha will be on there.

As for the game’s most prestigious neighbourhoods, we can imagine Emirates Hills and The Palm Jumeirah will be up there somewhere.

Playing piece-wise, there’s some bickering to be expected.

Emirates Towers, the Burj Khalifa, a camel, a dallah, a falcon and a piece which looks somewhat like a barrel (we’re not quite sure) are available. We’re baggsing the Burj Khalifa already.

The game is being launched by the Dubai Chamber of Commerce and Industry as they think it will help promote Dubai as a global hub for business and trade.

While an exact price and release date for Dubai-Opoly is yet to be announced, we’ll be sure to keep you updated.

“By launching this unique initiative, we will promote Dubai’s brand and boost its international profile.

“Dubai-Opoly offers an ideal platform to showcase what Dubai has to offer businesses and tourists, while it also merges these two concepts together in a fun and interactive way,” said H.E. Hamad Buamim, President and CEO of Dubai Chamber.