Get your winter clothes at the ready…

We’re set for a pretty nippy weekend here in Dubai.

Temperatures are set to drop by around 30 per cent over the next 24 hours, with night-time temperatures in the emirate reaching lows of 14 degrees Celsius.

And it’s not just the cold that’s out to get us – there are showers forecast for Dubai as well, with the National Centre of Meteorology and Seismology (NCMS) website predicting partial cloud and heavy rain for the city.

Rain is predicted to travel along the UAE coast this afternoon and possibly into Friday, according to Gulf News.

“We expect different intensities of rainfall by late afternoon and tomorrow also the weather will be the same,” a NCMS spokesperson told the newspaper.

There are also moderate gusts of around 44 kilometres per hour around Dubai too.

The NCMS has said that there will be a large drop in temperatures in other parts of the UAE and the Arabian Gulf due to strong winds bringing in cold air from Iran. 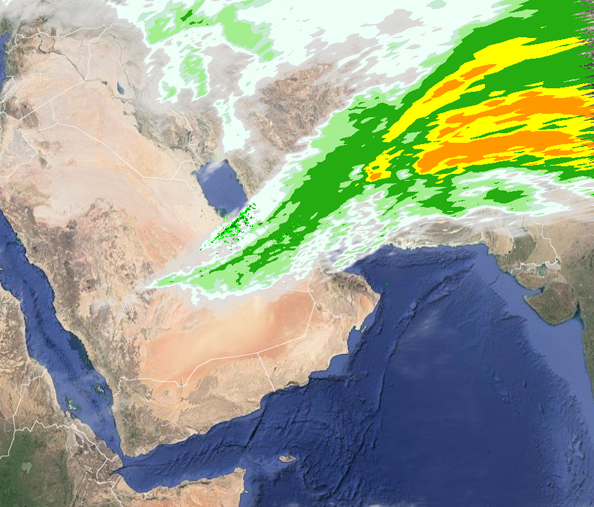 The highlighted area shows the cold wind being swept over from Iran to the UAE. Image: NCMS

In the UAE’s mountains, temperatures are forecast to be around zero degrees starting from Thursday, and will continue to drop on Friday.

More…
*Want a thrilling weekend or a chill one? 22 things to do, whatever your mood*
*Camping in the UAE and beyond: Five places to pitch your tent*
*Dhs250,000 concealed inside Dubai-bound bananas*

Some areas may experience extended rainfall and, if we’re lucky, some of the mountains may even experience snowfall.

So even if it’s just for a couple of days, we may be treated to a rather Swiss-looking backdrop in parts of the UAE.

January, on average, is the coldest month in Dubai, with the temperature starting to pick up towards the summer months around April.

THE SEA WILL BE CHOPPY…

NCMS have also warned that the Arabian Gulf and Oman Sea will become rough on Thursday, Friday and Saturday, with wind speed weakening gradually by Saturday night.

If you’re a windsurfer? Fantastic. However, if you’re looking to go for a dip, make sure you don’t stray too far from the shore.

Wind speeds will be reaching up to 65 kilometres per hour over exposed areas, including the ocean, so we can expect a bit of sand to be kicked up.