A robot cop will soon be patrolling the streets of Dubai

We’re pretty sure we’ve seen a movie about this…

Dubai Police is set to put its first real-life Robocop into service — and there could be an entire squad of them patrolling the streets by 2030.

Prototypes of the police robots were unveiled at the Gulf Information Technology Exhibition (GITEX) in October, but this week police confirmed the first robot’s induction into the force was imminent.

Brigadier Khalid Nasser Al Razouqi, general director of the Smart Services Department, told Gulf News this would happen in May.

“We are looking to make everything smart in Dubai Police. By 2030, we will have the first smart police station which won’t require human employees,” he was quoted as saying.

“By 2030, we are keen to make robots around 25 per cent of the total police force,” he announced during a presentation at a police practices forum, Gulf News reported.

Here is a picture of a robot patrolman taken by Gulf Business at last year’s GITEX: 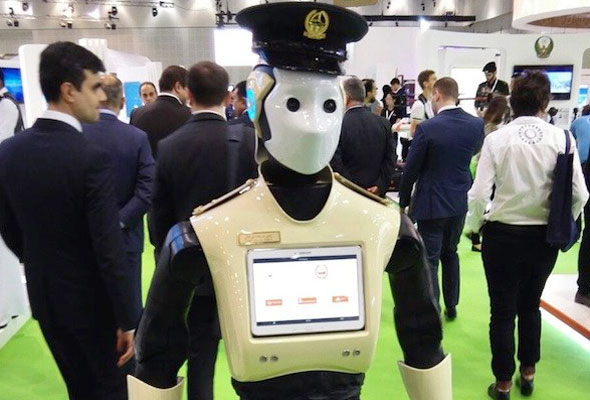 How does he work? You can use the touchscreen on his chest to report crimes, pay for traffic violations, and submit paperwork.

Like any officer worth his cap, he can also salute and shake hands.

Here is a picture of another type of police robot that was on display at the exhibition: 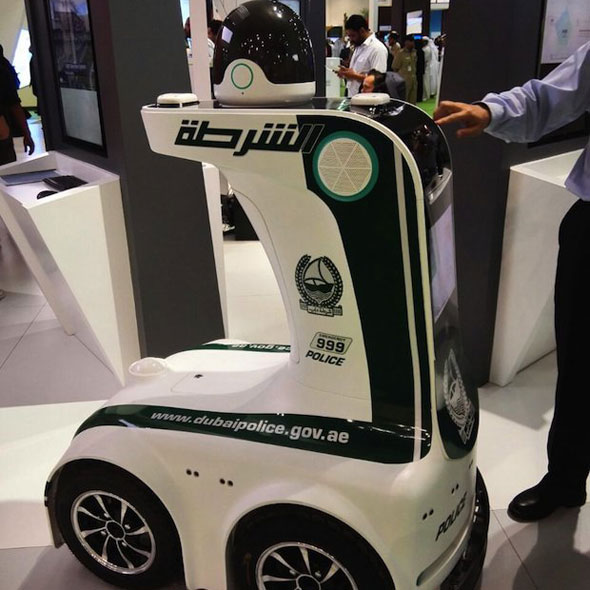 According to Gulf Business, this one uses a variety of cameras that are able to detect people and objects. If it spots anything suspicious, it can alert police (the human kind, that is). It is also fitted with a smoke detector to report fires.

The robot has a battery life of roughly eight hours, and automatically returns to its charging station when it needs to.

Androids that can serve and protect? Domo arigato, Mr. Roboto.