The world’s first operational robot policeman has officially joined the line of duty.

After months of anticipation, Dubai Police this week formally inducted its Robocop into the force.

His first auspicious task? Greeting guests at the opening of the Gulf Information Security Expo and Conference. 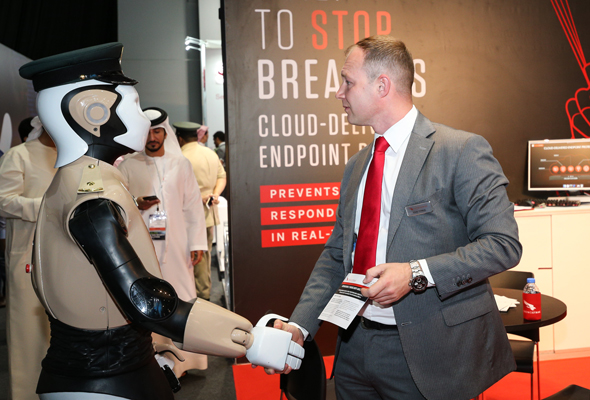 More…
*A robot cop will soon be patrolling the streets of Dubai*
*Mabrook: Even Dubai’s robots are winning awards now*

That’s right, the Robocop – standing 1.7 metres tall and weighing 100 kilograms – is equipped with an emotion detector which can recognise gestures and hand signals from up to 1.5 metres away.

He can detect a person’s emotions and facial expressions, and can change his own expression and greetings accordingly to put people at ease.

The Robocop will use facial recognition software to help police officers (the human kind, that is) identify and catch offenders, as well as broadcast live video feeds.

He can also perform a highly dignified military salute, as demonstrated in this photo: 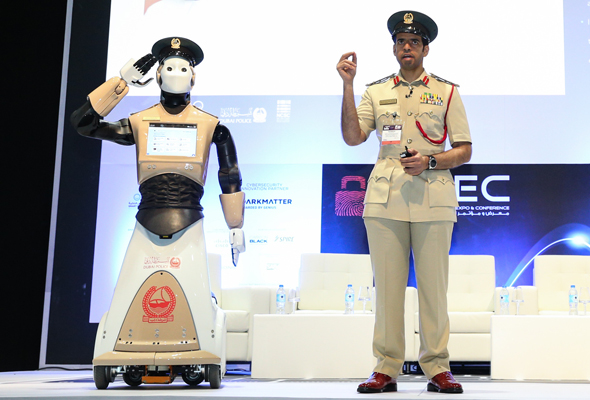 “With an aim to assist and help people in the malls or on the streets, the Robocop is the latest smart addition to the force and has been designed to help us fight crime, keep the city safe and improve happiness levels,” said Brigadier-General Khalid Nasser Al Razzouqi, director-general of Smart Services at Dubai Police.

“The launch of the world’s first operational Robocop is a significant milestone for the emirate and a step towards realising Dubai’s vision to be a global leader in smart cities technology adoption.”

WHAT ELSE CAN HE DO?

The Robocop can communicate in six languages, including Arabic and English, so he is able to have a chat with you and respond to your queries.

You can also use the touchscreen on his chest to report crimes, pay for traffic violations, and submit paperwork.

WHERE CAN YOU SEE HIM?

The Robocop will be patrolling the halls of GISEC until Tuesday evening, before moving to patrol unspecified high-density areas of the city (we’re thinking he’ll definitely be making an appearance at The Dubai Mall, then).