Sheikh Mohammed has penned a poem for Qatar...

HH Sheikh Mohammed bin Rashid Al Maktoum, UAE Vice-President and Prime Minister and Ruler of Dubai is no stranger to the written word, having published multiple books including an autobiography.

His latest piece, however, is a little more topical, he has posted a poem on social media that urges Qatar to “return to the GCC fold” in light of recent events which have led the UAE, Saudi and Bahrain to cut ties with the nation earlier this month.

Titled Al Dharab Wadeh (which translates to The Way is Clear), the poem is written wholly in Arabic and calls for unity in the region, reminding us that Arabs in the GCC have been living as one people since “time immemorial”, according to a report by Gulf Business.

His Highness makes it clear that he would like Qatar to return to the GCC, but has some words of warning wrapped-up in a simple but enlightening adage: “We will keep advising Qatar openly in line with the instructions of Prophet Muhammad (PBUH), when he said in a prophetic Hadith (saying): A wolf eats only an out-of-the-way sheep,”

He further stressed that remaining within the GCC was the “only way to safeguard Qatar from the fangs of wolves,”

But ultimately the poem concludes by encouraging those in the region to stand together in unity, stating “Now, it is time to get united and be one heart and protect each other without any grudge or hatred”. Hear hear.

The Dubai ruler is full of great words of wisdom, here are a few of his other choice quotes: 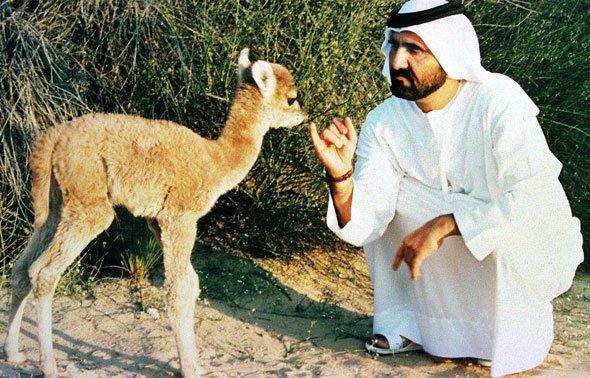 “If we had waited for regional stability to be restored before launching our huge projects, where would we be today?”

“Does running water stop when it reaches a rock? Of course not. It turns either left or right, and continues its way. Likewise, a positive person is confident that no challenge will stand in the way of achieving his or her goal.”