A major new diversion will open on Airport Road tomorrow

Starting this Friday, many people driving from the airport will need to take a new route. Here’s what we know…

A new diversion will open on Airport Road tomorrow due to the closure of a key interchange according to the Roads & Transport Authority (RTA). The roadworks will affect Deira-bound traffic along Airport Road (so, yes, people leaving the airport).

The diversion is part of the Airport Road Improvement Project, which aims to improve the traffic flow on intersections in the area (so, while it’s a hassle for now, it should be worth it).

This means that Deira-bound traffic on the Airport Road coming from Sheikh Mohammed bin Zayed Road and Al Khawaneej Road will be diverted to the new flyover. Rashidiya-bound motorists will use the leftward lanes to take them to the existing signalised junction.

So what does that look like? (The green line shows an alternative route to Deira to avoid the roadworks, the turquoise line is where the construction is). 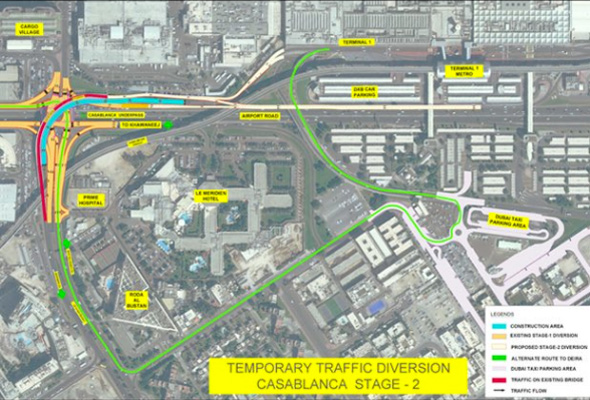 These works look to be quite crucial. They will increase the capacity of the Airport Road by an additional 5,000 vehicles per hour, enhance traffic safety level, and reduce the transit time on the Airport Road from Sheikh Mohammed bin Zayed Road up to Casablanca Road from 30 minutes to 5 minutes.

The first contract for the Airport Road Improvement Project covers the construction of Rashidiya and Casablanca Interchanges. These works are expected to slash the waiting time at the intersection from 13 minutes to under a minute.

And you don’t have too long to wait, as the project is expected to be fully finished by the end of this year. 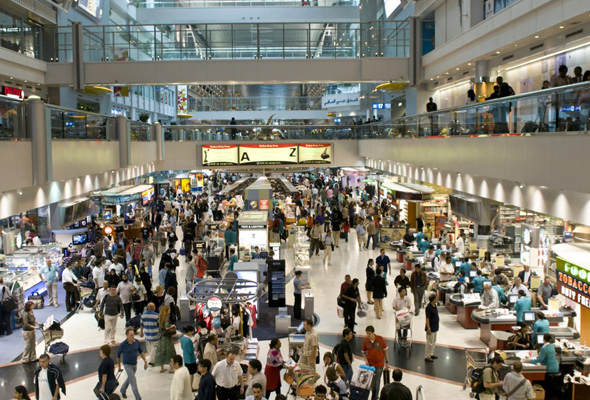 The Airport Road upgrades will definitely be welcome as Dubai International only continues to get busier.

According to Dubai Airports, Dubai International Airport welcomed over 6 million passengers this June. That’s up 3.9 per cent compared to 5.85 million during the same month last year.

In total, the world’s busiest airport for international travel processed over 43 million people in the first half of 2017.

“We are pleased with the growth in the first half, and with the rush of travellers expected to hit peak at the end of school holidays later next month, we are looking forward to another quarter of positive growth.” said Paul Griffiths, CEO of Dubai Airports.

News
Transport
Travel
EDITOR’S PICKS
UAE holiday dates announced for Eid Al Adha
READ MORE
Emirates extends suspension of flights from India to UAE again
READ MORE
Coming soon: Everything we know about Ain Dubai so far
READ MORE
Khorfakkan set to open new tourist attraction 580 metres above sea level
READ MORE
MOST POPULAR
A completely spoiler-free movie review of The Suicide Squad
Review: It's chilled vibes all the way at Jumeirah Islands Clubhouse
Review: Carna Dubai, a vibrant steakhouse 74-storeys high
Pics of the week: Your best photos of the UAE
New films to watch in cinemas this week: August 5 to 11
YOU SHOULD CHECK OUT
Our website uses cookies and other similar technologies to improve our site and your online experience. By continuing to use our website you consent to cookies being used. Read our privacy policy here.