A touch of luxury in Sri Lanka, the Pearl of the Indian Ocean

The flashy Maldives might be the Indian Ocean destination that gets the most attention – but next-door neighbour Sri Lanka ticks just as many boxes.

You probably know Sri Lanka best as a backpacker’s paradise, a cheap and cheerful gem less than five hours from Dubai.

There’s no doubt this vibrant destination is packed with natural riches, which makes it easy to see a lot for very little – but in recent times, more luxurious options have started washing up on the island’s pristine shores.

Perhaps you’re looking to plan a romantic getaway, or simply craving a relaxing break where the most difficult decision you face each day is whether to chill out on the beach or by the pool? Here’s how to make the most of Sri Lanka when your vibe is more ‘splurge’ than ‘shoestring’. 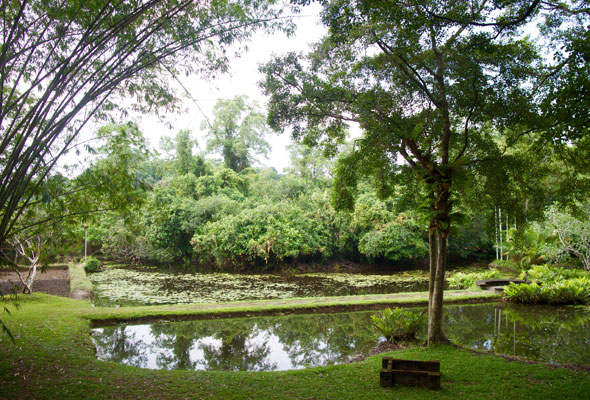 The late Geoffrey Bawa was the father of Sri Lankan architecture, with his distinctive style known as “tropical modernism”. You can visit his country home in Bentota, a former cinnamon estate and rubber plantation which he spent 40 years transforming into a serene fairyland of lush gardens, lily ponds, whimsical sculptures and secret nooks. Look out for bells dotted around the sprawling property, which Bawa would ring to let his staff know when he wanted his morning coffee or afternoon tea. You can take a guided tour of the gardens, enjoy a leisurely meal overlooking the lake, or even spend a night in one of Bawa’s six perfectly preserved suites. 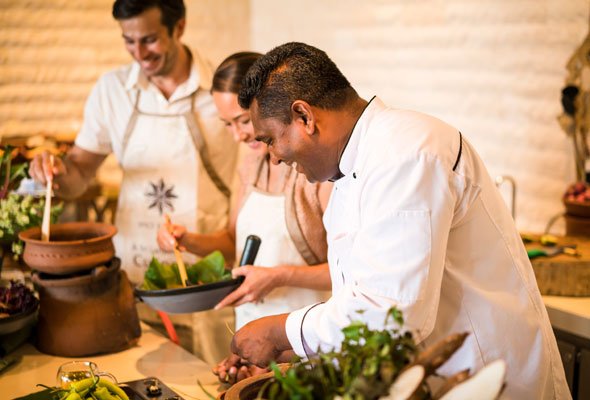 Immerse yourself in the local cuisine by learning how to make some delicious Sri Lankan specialties at the Anantara Spice Spoons cooking school. Accompanied by one of the resort’s master chefs, you’ll take an intrepid tuk-tuk ride to the colourful food markets, carefully selecting the freshest fish, produce and spices. You’ll bring your ingredients back to the resort, and set to work preparing your lunch, with plenty of tips and tricks from the chef. There’s nothing quite like the sweet satisfaction of eating a dish you’ve made yourself… and impressing your friends by being able to recreate it at home.

See elephants in the wild 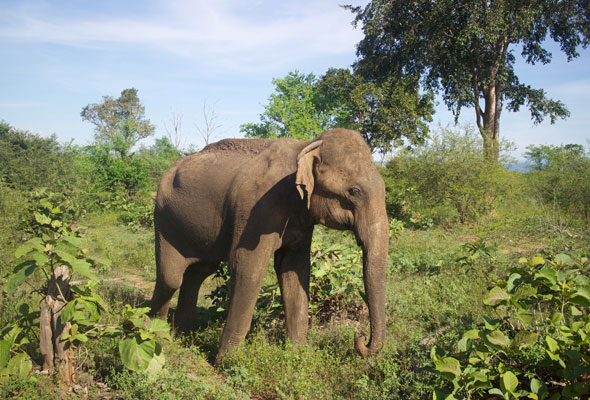 Udawalawe National Park in the south of Sri Lanka is home to around 500 Asian elephants, and is considered one of the best places in the world for spotting these gentle giants. Sprawling over 30,000 hectares, you’ll cruise through the nature reserve from the comfort of an open-top safari jeep. If you’re lucky, you’ll observe herds of the amazing creatures, from bumbling babies to wizened elders. Also look out for water buffalo, crocodiles, monkeys and peacocks, as well as Sri Lanka’s national bird, the junglefowl. For your best chance at seeing the animals, we recommend waking up before the sun – the park opens at 6am. We promise it will be worth it. 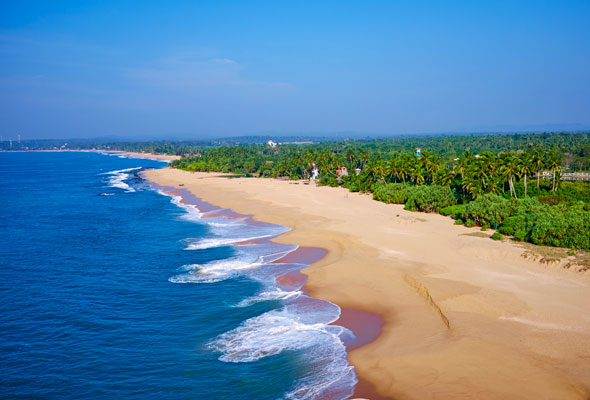 If you can bear to drag yourself away from the infinity pool, consider taking a surfing lesson in the balmy swells of the Indian Ocean. The gentle southern coast is perfect for beginners, and you’ll be in safe hands with the extremely patient Steve from Tropicsurf, a surf school based at the Anantara Tangalle resort. All gear is provided, and you’ll be taken through the basics – like how to pop up on your board – before hitting the waves. At the end of your epic session, you’ll be rewarded with a refreshing king coconut to sip on the beach. 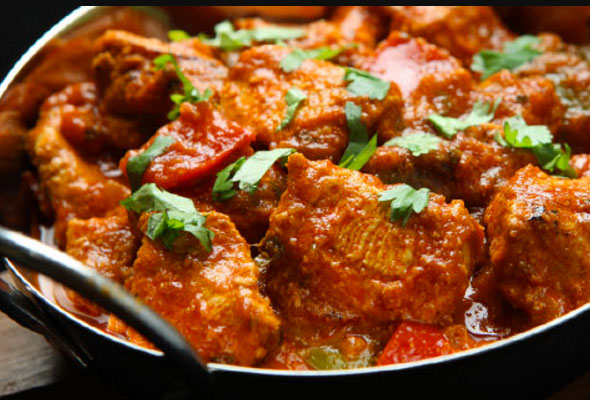 Deliciously fragrant curries are a staple of the Sri Lankan diet, best mopped up with a stack of coconut roti. Psst… according to the master chef at Anantara Kalutara, the five key ingredients for making the perfect curry are onion, garlic, chili, pandan leaves and curry leaves. 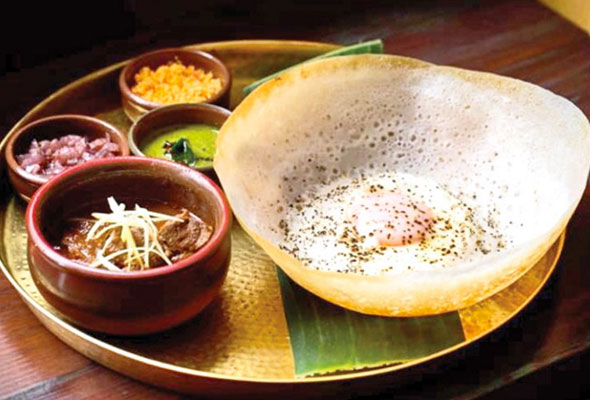 These highly versatile, bowl-shaped crepes are Sri Lanka’s answer to a hamburger. They can be topped with anything you fancy, but the most popular fillings include curry, coconut sambal and a fried egg. There’s also a version called string hoppers, which look like nests of noodles. 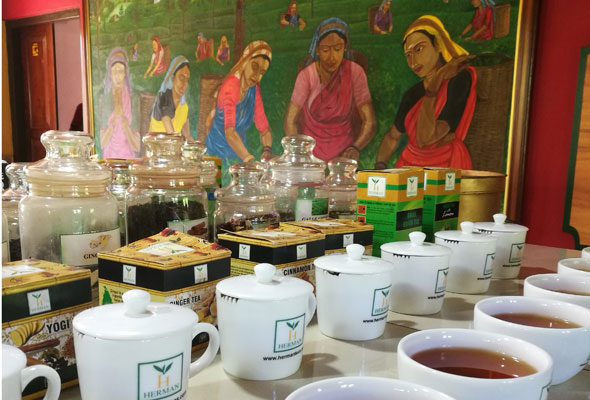 This tiny nation is the world’s fourth-largest producer of tea, so it would be rude not to have a cuppa. The Handunugoda Tea Estate offers a fascinating glimpse at the tea-making tradition, and is where you can sample the elusive Virgin White Tea, untouched by human hands. 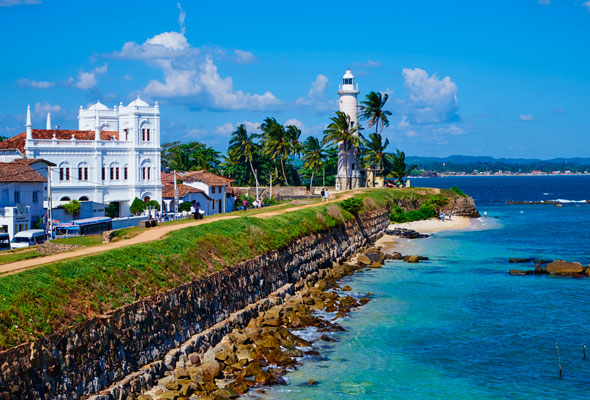 Here’s the history of the colonial town of Galle in a coconut shell: It was founded in 1505 by the Portuguese, who set about building a fortress to protect the trading port. A century later, the Dutch came along, making the fort even bigger and stronger, before the British finally arrived in the late 18th century to have a crack.

The fort has withstood the test of time – as well as the devastating 2004 tsunami – and is recognised as a UNESCO World Heritage Site. Within its walls you’ll find a charming coastal settlement of beautiful architecture and narrow, cobbled streets that are ideal for exploring on foot. Set aside a day for getting lost in the town’s quirky boutiques, museums and cute cafes. 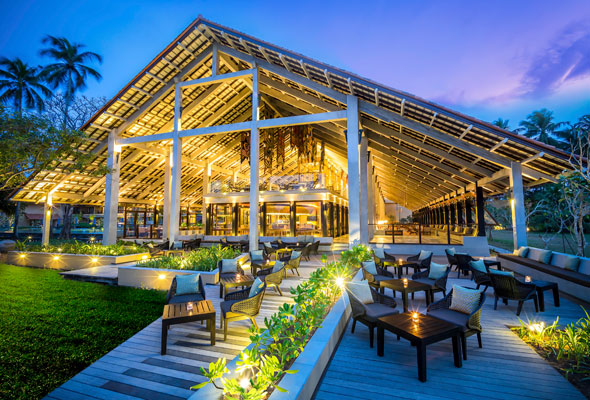 Located an hour’s drive south of Colombo, this tranquil resort is the perfect place to begin your journey down the coast. What makes this property extra special is that it was designed by the famous Sri Lankan architect, Geoffrey Bawa – in fact, it was one of his last projects. Rooms offer garden, ocean or lagoon views, which can also be enjoyed from the comfort of your bathtub, thanks to a clever open-plan layout. Tip: Request a frangipani-scented bubble bath, to really soak it all in.

Rooms start from US$374 a night. kalutara.anantara.com 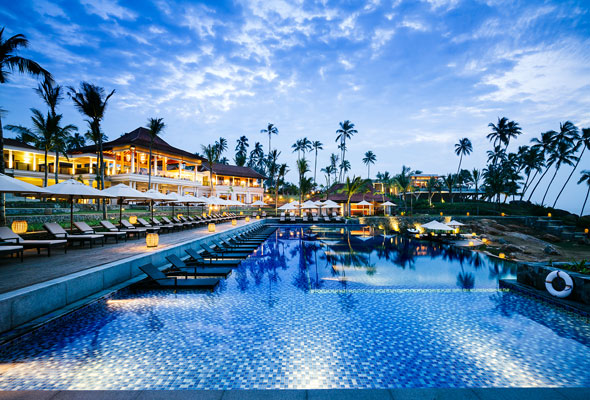 The clue is in the name. Set on a secluded beach on the island’s southern coast, you’ll feel as though you’ve stepped into paradise from the moment you enter the breathtaking open-air lobby. The sprawling resort boasts a grand total of six stylish dining spots, including the high-end Italian restaurant Il Mare, perched dramatically on a clifftop overlooking the ocean. It’s prime real estate, and the best place to catch the sunset.

Rooms start from US$406 per night. tangalle.anantara.com

Sri Lanka is a year-round destination, but you may wish to time your visit to avoid the island’s two separate monsoon seasons. Expect pleasant weather on the west and south coast from December to March, while if you’re travelling east, your best bet is between May and September. 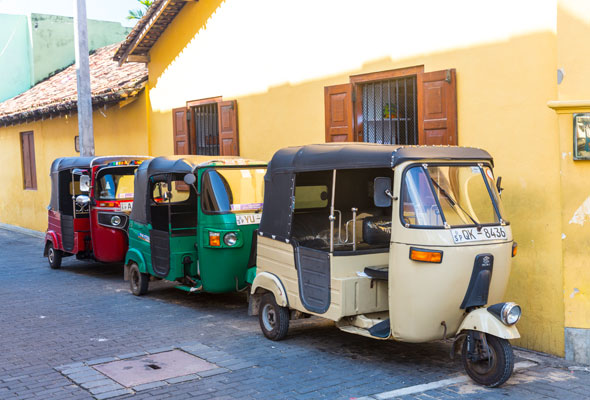 Visitors to Sri Lanka require a 30-day tourist visa, which can be applied for online. You should receive a response within 24 hours of your application. eta.gov.lk

– The population of Sri Lanka is 21 million, and its largest city and capital is Colombo.

– It has been known by many different names throughout its history, including Lanka, Helabima, Serendib, and Ceylon. Its current name means “resplendent land” in Sanskrit.

– It’s said to be one of the few places on earth where you can see both the world’s largest land mammal, the elephant, and sea mammal, the blue whale, in a single day.

– It’s thought to be home to the world’s oldest tree, the 2000-year-old Sri Maha Bodhi in Anuradhapura.

Travel
Travel Guides
EDITOR’S PICKS
Bla Bla: Dubai's huge new beach club is set to open this Thursday
READ MORE
9 royal-approved Dubai restaurants
READ MORE
16 of the best beach bars in Dubai for sundowners
READ MORE
Where to get the Covid-19 vaccine in Dubai, Abu Dhabi and across the UAE
READ MORE
MOST POPULAR
Holiday in your own private sunset terrace at this cool UAE campground
Dubai Rugby Sevens: new dates announced for 2021
Seychelles: quarantine-free travel if you've had the Covid-19 vaccine
This new Friday night brunch includes free-flowing drinks for Dhs235
10 awesome things to do in Dubai this weekend: Jan 21 to 23
YOU SHOULD CHECK OUT
Our website uses cookies and other similar technologies to improve our site and your online experience. By continuing to use our website you consent to cookies being used. Read our privacy policy here.