Dubai is getting another night swimming beach

Sick of feeling like a human dumpling in Dubai’s simmering seas? Try a night-time swim instead…

Taking a dip in the sea during the heat of Dubai’s summer can be less “swimming” and more “poaching”. But when the sun goes down, it’s a far more inviting prospect.

Following the enormous popularity of the city’s first ever night swimming beach at Umm Suqeim, Dubai Municipality has announced it will be opening a second after-dark spot for swimmers at Al Mamzar Beach in Deira.

Previously, night swimming was banned at all Dubai beaches due to safety concerns. However, Dubai Municipality has teamed up with local company D Idea Media to install “smart power poles” that produce a light strong enough to illuminate the sea. 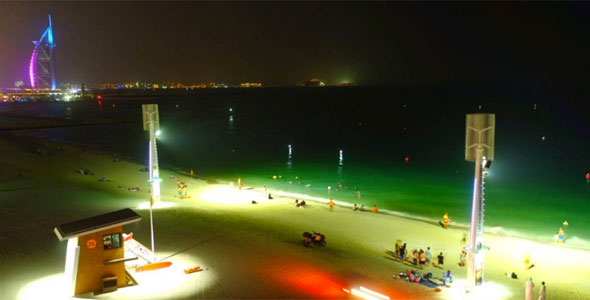 ALSO READ:
Yes, night swimming is now allowed at this Dubai beach
Love an after-dark dip in the sea? You should stop

The poles are completely self-sustainable, powered by wind and solar energy, and able to produce 1.5kW of energy a day. They use sensors to automatically turn on with the sunset.

Alia Al Harmoudi, director of the Environment Department at Dubai Municipality, told Gulf News the Umm Suqeim project had been a “remarkable success” since its opening in May – even helping to boost tourism.

During the Eid Al Fitr holidays, there was a large crowd of visitors of different nationalities at the beach enjoying the night swimming atmosphere, she said. Al Mamzar Beach will have similar facilities to Umm Suqeim, including a rescue station and a qualified crew of lifeguards.

Remember night swimming is still prohibited at all Dubai beaches except for these two – so you might as well make the most of them. Umm Suqeim beach is open for after-dark dips from sunset to midnight, and we’ll let you know when Al Mamzar is open too.