Yes, there is a bridge being built across Sheikh Zayed Road right now

So, what are the roadworks near Al Manara on Sheikh Zayed Road actually going to achieve?

Anyone who drives down Sheikh Zayed Road often will have noticed that the roadworks near the Al Manara and Umm Al Sheif exits are really coming along.

In fact, there is now a bridge under construction that floats on top of the southbound lane of Sheikh Zayed just before the Al Manara exit. Sheikh Zayed Road is no stranger to overpasses and spaghetti junctions, but it’s still kind of surreal to drive under the being-built-road, so what is it? And where will it lead to?

Well, the bridge, which you will see as you drive between the Umm Al Sheif and Al Manara intersections on Sheikh Zayed Road near Jumeirah 3 and Al Quoz is all part of  a huge traffic plan that will connect Al Wasl Road directly Al Khail Road, bypassing the majority of Al Quoz and easing traffic on Sheikh Zayed Road particularly.

ALSO READ
*Yes, there is a waterfall on Sheikh Zayed Road*
*17 new UAE traffic fines and laws you need to know about*

So yes, that’s why some of the lanes on Sheikh Zayed Road have been blocked recently, and why some side streets along Sheikh Zayed road have changed/closed (but we think it will be worth it).

Here’s a video that explains a bit more about the project, and where it will improve traffic flow.

Basically, a flyover will be built that goes over Sheikh Zayed Road, and ends at Latifa Bint Hamdan Street in Al Quoz, directly connecting this part of Jumeirah and Dubai with Al Khail Road and then the inner parts of the city.

Here’s a map showing the area, and we’ve put a big red line to show you how Al Khail and Al Wasl will be connected and through which areas. Note: the line isn’t an accurate reflection of the new overpass road, which will be a bit bendy, but it does generally show you the new connections it will create: 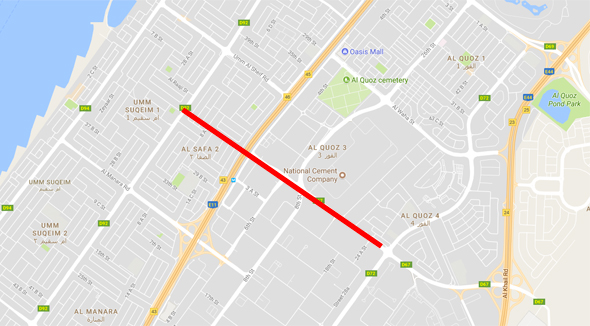 And no, don’t panic, despite headlines floating around this week suggesting that the speed limit of Sheikh Zayed Road had been cut down to 80 km/h, it’s actually the new speed limit on Sheikh Zayed bin Sultan Road in Umm Al Quwain (and a 20 km/h grace window on the speed limit still applies). So you’re still fine at 105 km/h on Dubai’s main highway.

News
EDITOR’S PICKS
Ramadan in Dubai: 48 iftars to try
READ MORE
Where can Dubai residents travel? Check out these 14 destinations
READ MORE
Rumours, facts and reveals: New Abu Dhabi bars and restaurants
READ MORE
UAE announces reduced working hours for Ramadan 2021
READ MORE
MOST POPULAR
Yoga and art combine in Dubai's newest immersive fitness class
Video chat your family across the world in your own private cinema
A new Spanish restaurant has opened its doors in Barsha
A stunning new mangrove forest has opened in Dubai
Dubai clarifies rules surrounding dining outdoors in Ramadan
YOU SHOULD CHECK OUT
Our website uses cookies and other similar technologies to improve our site and your online experience. By continuing to use our website you consent to cookies being used. Read our privacy policy here.