FYI: These Dubai roads are going to be closed over the next year

The Roads and Transports Authority has announced ongoing road closures on both sides of Sheikh Zayed Road, starting from March 10 (this Friday).

A number of traffic diversions will be put in place as a result of the closures, which will occur between Interchanges 2 and 3.

More…
*Salik: Driving down Sheikh Zayed Road just got more expensive*
*Illegal or not? What’s the deal with dash cams in Dubai?*

Here is a map from the RTA showing the closures and alternative routes: 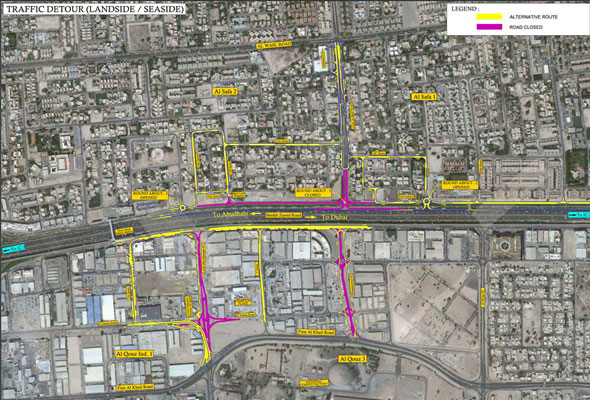 How will you be able to get onto Sheikh Zayed Road now? Well, Nabeel Mohammed Saleh, director of roads, says drivers can use two temporary roundabouts.

The next phase will begin on Friday, March 24, and involves part of Latifa bint Hamdan Street, which will become a one-way street.

The alternative route for motorists on First Al Khail Street will be to head west, turn left to Al-Jarena Street and onto Street No. 3A.

A U-turn will replace the existing roundabout on Al-Zomorrud Street.

WHAT’S ALL THIS WORK FOR?

“Such bridges will considerably ease the traffic flow on Sheikh Zayed Road, and significantly save time and effort of road users,” Nabeel said.

News
Transport
Travel
EDITOR’S PICKS
UAE holiday dates announced for Eid Al Adha
READ MORE
Emirates extends suspension of flights from India to UAE again
READ MORE
Coming soon: Everything we know about Ain Dubai so far
READ MORE
Khorfakkan set to open new tourist attraction 580 metres above sea level
READ MORE
MOST POPULAR
A completely spoiler-free movie review of The Suicide Squad
Review: It's chilled vibes all the way at Jumeirah Islands Clubhouse
Review: Carna Dubai, a vibrant steakhouse 74-storeys high
Pics of the week: Your best photos of the UAE
New films to watch in cinemas this week: August 5 to 11
YOU SHOULD CHECK OUT
Our website uses cookies and other similar technologies to improve our site and your online experience. By continuing to use our website you consent to cookies being used. Read our privacy policy here.