Are you excited for what has been dubbed the most anticipated fight of the century? We sure are.

So much so, in fact, that earlier this week we put together a list of the best bars and restaurants around Dubai where you’ll be able to catch what’s sure to be an epic face-off between World Boxing Champion Floyd Mayweather and UFC Champion Conor McGregor, live from Las Vegas.

Not all of us, however, have the luxury (or desire) to get out of bed early enough to make the beginning of the broadcast at 5am (although some believe the actual big fight will start closer to 7.00am or 7.30am), particularly on a Sunday.

Fortunate then, that there may be an alternative solution for those who more interested in catching the highly anticipated dust up from the comfort of their own couch. 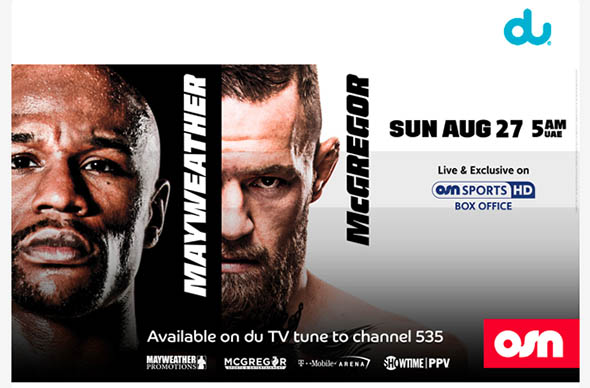 Du, in partnership with OSN, have launched a channel exclusively for subscribers of their du TV service that will give them access to the so-called “Money Fight” completely for free.

If you currently subscribe to OSN via du, you simply need to punch in channel 535 on your remote and tune in from 5am on Sunday 27 August to catch the epic boxing battle. It’s that simple.

For the rest of us, we’ll have to settle for getting up at the crack of dawn, slipping into some sweatpants and rushing out the door to the nearest venue.

Sport & Fitness
EDITOR’S PICKS
Ain Dubai will open with fireworks, live music and a drone show
READ MORE
Incredible Aura SkyPool to open in Palm Tower this November
READ MORE
Brit Grand Slam hero Emma Raducanu confirmed for Mubadala Tennis
READ MORE
What’s On Nightlife Awards 2021: Here are the nominees...
READ MORE
MOST POPULAR
12 of the best places for glamping in the UAE
Emma Raducanu sends a message to her UAE fans
Parisian celebrity hotspot Caviar Kaspia has opened in Dubai
Here's what you'll be eating at SushiSamba when it opens in November
Chic Mediterranean beach bar Ula is now open on the Palm Jumeirah
YOU SHOULD CHECK OUT
Our website uses cookies and other similar technologies to improve our site and your online experience. By continuing to use our website you consent to cookies being used. Read our privacy policy here.