So many flamingo chicks were born in Abu Dhabi this summer

Now, that’s a flamboyance of flamingos…

Abu Dhabi’s flamingo population is booming, with a record 448 chicks hatched at the Al Wathba Wetland Reserve over the summer months.

The birds began building their nests at the reserve’s main nesting location in mid-April, and scientists spotted the first eggs shortly after, the Abu Dhabi Environment Agency said.

This year’s effort smashed the previous record set in 2015, when 420 chicks hatched at the reserve. The reserve is the only site in the UAE where the birds continue to breed regularly. 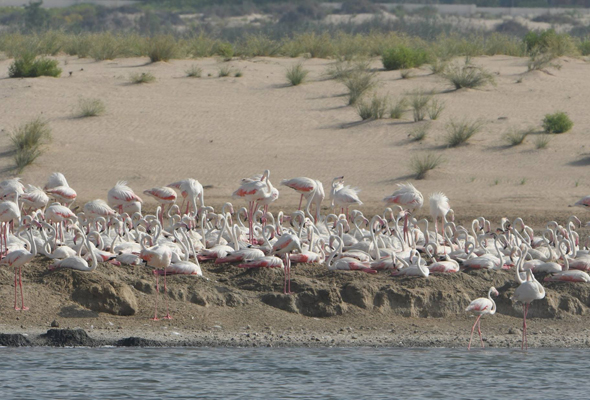 “Flamingos are the star attractions of the reserve, a high number of people have been coming to see them since the reserve was opened to visitors,”said Dr Shaikha Salem Al Dhaheri of the Environment Agency.

“Consecutive breeding for seven years has seen growing interest in the area from both the public and scientists.”

Flamingos bred for the first time at Al Wathba Wetland Reserve in 1998, and the late Sheikh Zayed bin Sultan Al Nahyan established the reserve as a protected area.

The reserve is a 45-minute drive from Abu Dhabi city and provides a refuge for many species of reptiles, small mammals and insects.

Want to go and visit Abu Dhabi’s new pink and leggy residents? The Al Wathba Wetland Reserve is still closed to visitors due to breeding season, but is expected to re-open by mid-October. You can keep an eye out on the website here.