The UAE Hyperloop just got one step closer to reality...

Hyperloop One has completed the first high-speed test run of its passenger pod.

The company bringing the Hyperloop to the UAE has made another giant leap forward, achieving record speeds during the first test run of its passenger pod.

Los Angeles-based company Hyperloop One is working on what it hopes will be the world’s first operational Hyperloop system, and is currently conducting trials in the Nevada desert.

In the latest test, the team has sent a passenger pod through the 500-metre tube for the first time. The shuttle reached a top speed of 310 kilometres an hour – the fastest trial yet.

In a statement, Hyperloop One said the pod “accelerated for 300 metres and glided above the track using magnetic levitation before braking and coming to a stop”.

“This is the beginning, and the dawn of a new era of transportation,” said Hyperloop One co-founder Shervin Pishevar.

Clearly, the Hyperloop still has a long way to go to reach its target speed of 1200 kilometres an hour – which would see the journey between Dubai and Abu Dhabi cut down to just 12 minutes.

But Hyperloop One CEO Rob Lloyd said the trials are proof the technology works. 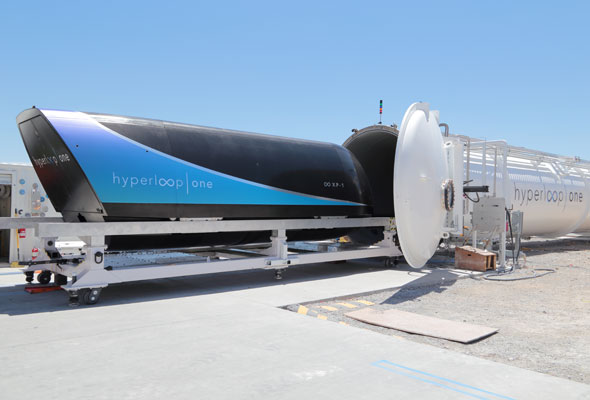 “We’re excited about the prospects and the reception we’ve received from governments around the world to help solve their mass transportation and infrastructure challenges,” he said.

HYPERLOOP IN THE UAE

In August 2016, Hyperloop One was invited to participate in a Dubai Future Accelerator programme led by HH Sheikh Mohammed bin Rashid Al Maktoum, vice president of the UAE and ruler of Dubai.

In November, it was announced that the company had reached an agreement with the Dubai Roads and Transport Authority to study the feasibility of building a Hyperloop in the UAE.

Earlier this year, Lloyd praised the UAE for its “visionary leadership” in making the groundbreaking transport system a reality.

“Our company was provided with unprecedented access to expert resources in an innovative environment to develop our idea for the Hyperloop system in the UAE,” Lloyd said.

While an official launch date has not been set, Hyperloop One has previously said they could have an operational system built in the UAE by Expo 2020.