WiFi-enabled lampposts will soon be springing up around Dubai

And we could also be getting solar-powered roads…

Dubai has a no shortage of well-lit roads and highways. In fact, you’d be hard pressed to find a major intersection that isn’t lit up like a villa during Eid, thanks to the many lampposts dotted about the city.

Now, imagine if those lampposts could be used for more than just illumination. That’s the impetus behind a newly announced partnership between DEWA and France’s Colas Group, with plans to roll out a number of low-energy light poles across Dubai as early as 2018.

The kicker? They’ll also be able to broadcast WiFi. That means no more chewing through your monthly mobile data quota when out and about. Hooray!

ALSO READ
*Yes, night swimming is now allowed at this Dubai beach*
*Dubai’s parks are getting their own solar-powered libraries*

In a statement released by the Dubai Media Office, MD and CEO of DEWA, HE Saeed Mohammed Al Tayer (who headed the delegation’s visit to the company’s headquarters in Nice, France), said that the new poles would utilise a combination of different smart technologies whilst being environmentally friendly.

“The smart poles that will be produced in the first quarter of 2018, combine multiple innovative features that support smart-city infrastructure according to the highest international standards. These features support smart and green mobility, autonomous driving, Wi-Fi internet, Internet of Things (IoT), energy-saving lighting, environmental intelligence, and other innovative features that streamline the smart-city transformation.”

Based on that laundry list of features, that basically makes them whatever the supercomputer equivalent of lampposts is. We wonder how similar they’ll look to the futuristic ones (pictured above) found at the night swimming beach in Umm Suqeim 1. 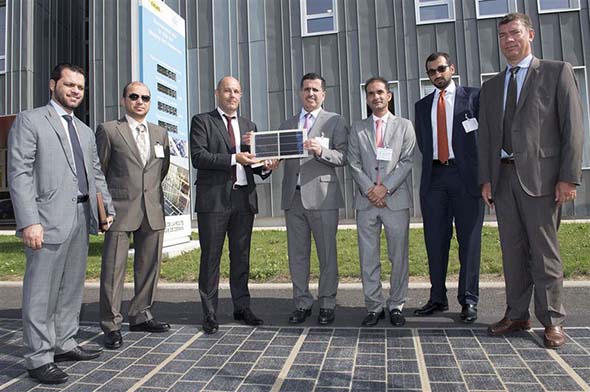 The delegation also took the time to look at some solar-powered panels that can be installed into existing road surfaces. The innovative tech could be used further down the line to harness the power of the sun to charge electric vehicles as they become more prevalent in the UAE.

While no date was given regarding a roll out of the solar-powered road panels, it’s clear that they, along with the WiFi-enabled lampposts, are just another series of key steps in Dubai’s quest to become the smartest city in the world.

Bring it on, we say.

News
EDITOR’S PICKS
Ramadan in Dubai: 48 iftars to try
READ MORE
Where can Dubai residents travel? Check out these 14 destinations
READ MORE
Rumours, facts and reveals: New Abu Dhabi bars and restaurants
READ MORE
UAE announces reduced working hours for Ramadan 2021
READ MORE
MOST POPULAR
A new Spanish restaurant has opened its doors in Barsha
A stunning new mangrove forest has opened in Dubai
Dubai clarifies rules surrounding dining outdoors in Ramadan
Abu Dhabi Police warns public not to fall for beggar tricks
Splash around with these summer deals at waterparks in Dubai
YOU SHOULD CHECK OUT
Our website uses cookies and other similar technologies to improve our site and your online experience. By continuing to use our website you consent to cookies being used. Read our privacy policy here.