Last month we reported that the first 50 of 200 Teslas that the Dubai Taxi Corporation (DTC)  committed to purchasing from the US electric vehicle manufacturer had been officially added to the Dubai Taxi fleet.

In a move to make them more readily available to everyday commuters, the DTC has teamed up with ride-hailing company Uber announcing that all 50 vehicles will be bookable via a new UberONE service in its app.

Due to launch on Tuesday 10 October, customers will be able to hail either a Model S or Model X Tesla like they would a normal Uber. Rides will be charged at the same rate as UberBLACK (the company’s premium limousine service) which start at a base fare of Dhs10, and run at Dhs1.9 per kilometre.

Back in February local ride-hailing competitor Careem announced that its customers would be able to book a normal RTA taxi via its app. You can see how Uber’s fares compare against Careem and RTA taxis here. 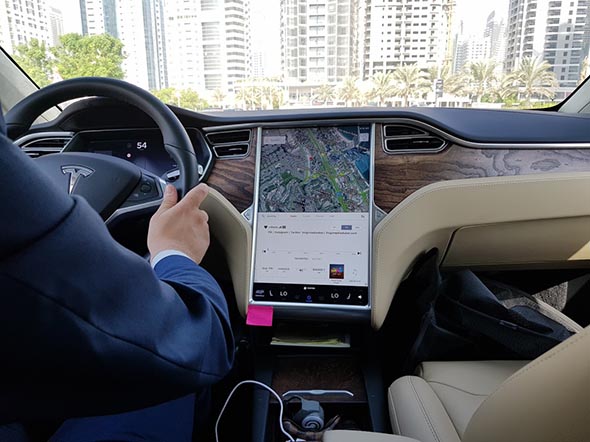 We had the chance to use the UberONE service and ride in a six-seater Model X ahead of the official launch on Tuesday and were suitably impressed. Our driver Ahmed (who works for the DTC, not Uber) was knowledgeable about the car, commenting that he had picked up in excess of 40 passengers since the DTC went live with the fleet last month.

The car itself was as luxurious as expected from a vehicle that starts at a cool Dhs310,000 if you wanted to buy one outright. The gullwing doors and massive touchscreen front console (pictured above) are like something out of a sci-fi film.

To say we wouldn’t mind driving around in one of these on a more permanent basis would be the understatement of the year. And now thanks to UberONE it looks like that might actually be somewhat of a reality.

Transport
EDITOR’S PICKS
13 Sheikh Hamdan-approved restaurants in Dubai
READ MORE
Dubai brunches temporarily banned in new preventative measures
READ MORE
12 upcoming Dubai mega-projects we can't wait for
READ MORE
16 of the best beach bars in Dubai for sundowners
READ MORE
MOST POPULAR
Ladies, here's how you can win a chance to showcase your talent at Radisson Red
Dubai influencers must now declare free gifts to UAE tax authority
Wit woo: Check out Boomah, Abu Dhabi's first owl cafe
This stunning new restaurant brings Australia to Dubai
There's a dry night in Dubai coming up this week
YOU SHOULD CHECK OUT
Our website uses cookies and other similar technologies to improve our site and your online experience. By continuing to use our website you consent to cookies being used. Read our privacy policy here.