If there’s one place you check out this week, make it Cabin…

But over the past couple of months, there’s been a flurry of activity in this relatively untouched neighbourhood – specifically in an area called Science Park, Barsha South.

Right here, to be precise: 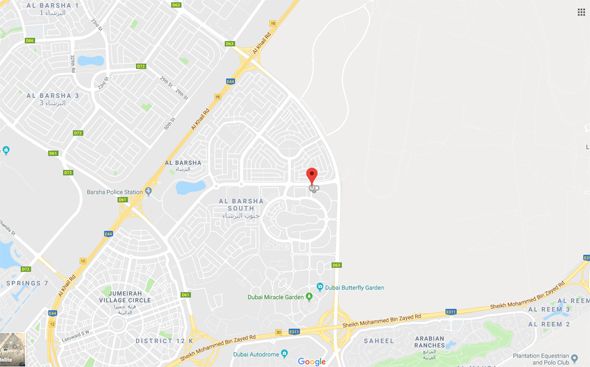 This is where you’ll find Cabin. 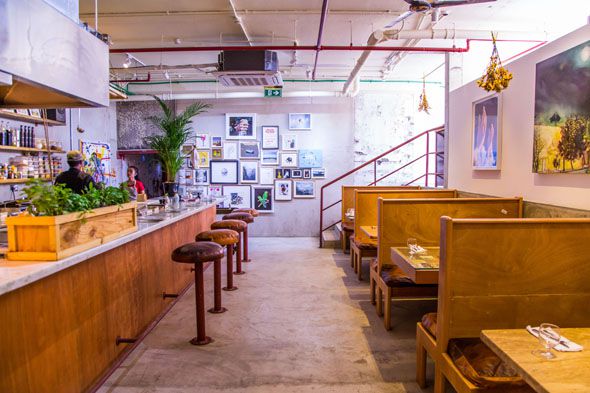 Inside Cabin – the studio/cafe in Barsha South

Run by a charismatic British artist named Jonathan Gent, Cabin rocks a sleek concrete meets woodgrain interior, pretty front garden, large diner style booths and all manner of art: big canvases painted by Jonathan drape across the windows; a gallery wall – with original paintings from Andy Warhol, Damien Hirst and British artist Julian Opie – lines one side of the restaurant; a small foyer displays handmade art utensils, candles and apparel; and another ‘work-in-progress’ artwork of Jonathan’s hangs near the kitchen. 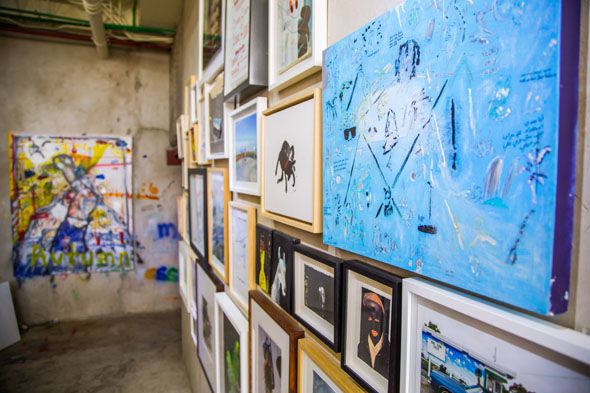 The Gallery Wall features original works from Warhol and Hirst. 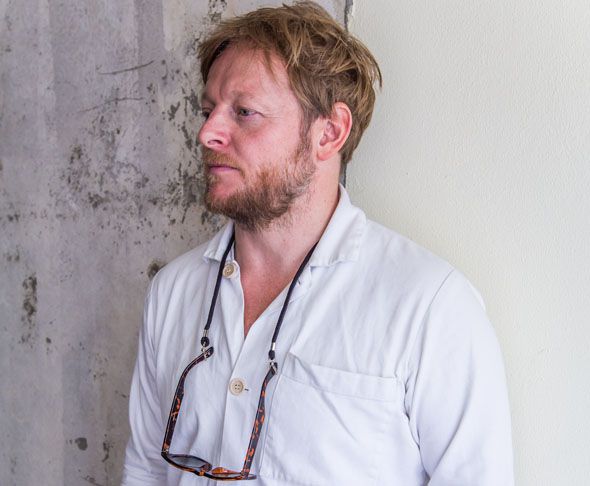 “This is my studio in Dubai. I work here at night, and in the morning you can smell a bit of paint, which is a lovely thing,” he explains.

What about the name? “Well, it’s not because of all the cabin crew in this building, although that’s what everyone thinks, which I quite like! It’s named after the studio I have up in the Highlands of Scotland. My kids call it, The Cabin, and in this cabin, I paint, hunt, forage and make stuff. I wanted to create a similar vibe here in Dubai – a place that you could disappear to, bringing a rural setting in an urban setting.” 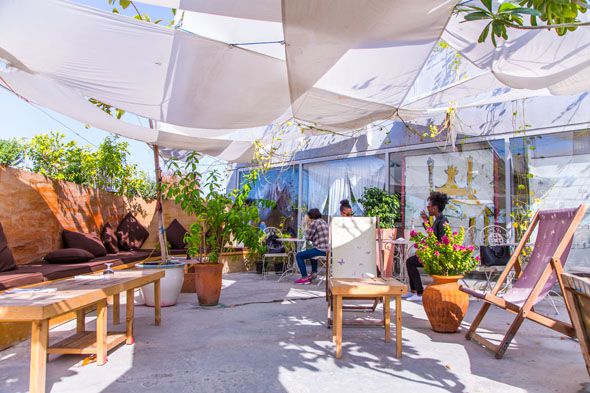 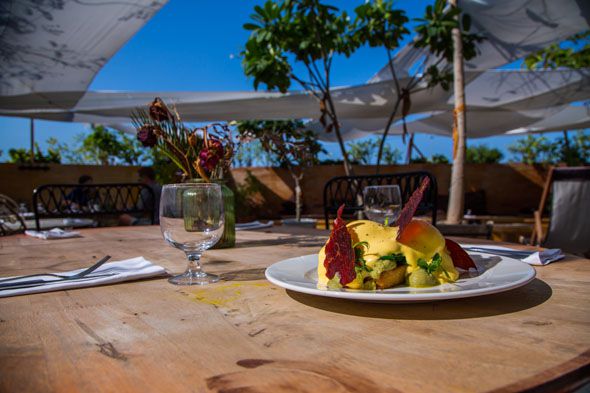 “Cabin is a place that you could disappear to; where you’ll find a rural environment in an urban setting.”

But while the art in Cabin is impressive in itself, the little studio has been causing a stir for another reason: the food. 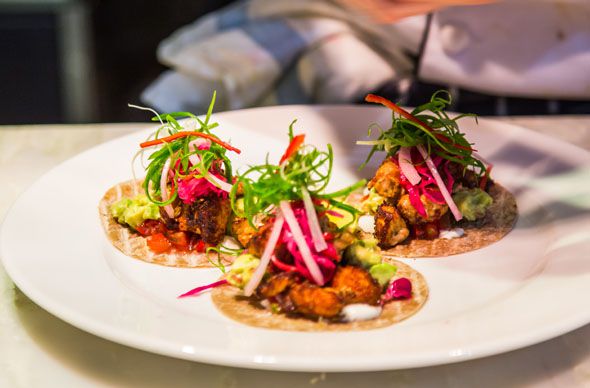 “My Dad was a restaurateur and for as long as I can remember, I had always lived above a pub or restaurant. It’s always been a part of my life. I’ve loved the buzz that you get within hospitality.” So Jonathan – together with his partner and award-winning Emirati design entrepreneur Rami Farook – decided to create Cabin.

“I really didn’t want it to be hipster, though. I just want to serve classic coffee with a cap on the avocado dishes we serve! We have a fantastic chef at the helm, Aaron Jones, who we brought on from a Michelin star restaurant in Singapore called Saint Pierre. The food he creates is incredible.” 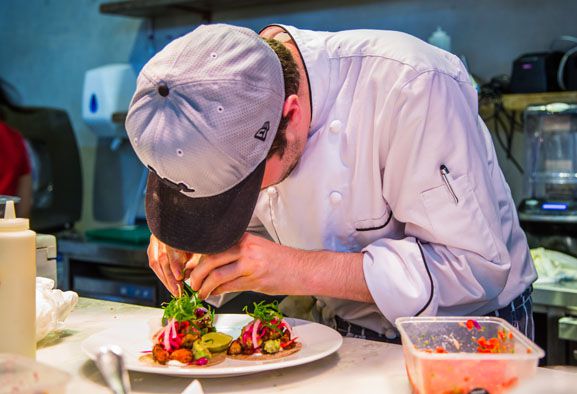 On our visit, we ordered the ribeye beef (Dhs60) with baby beetroot, pickled mushroom and crispy shallots. The ribeye was cut in slices, charred ever so slightly on the sides and perfectly seasoned. Each mouthful a party parade of flavours. 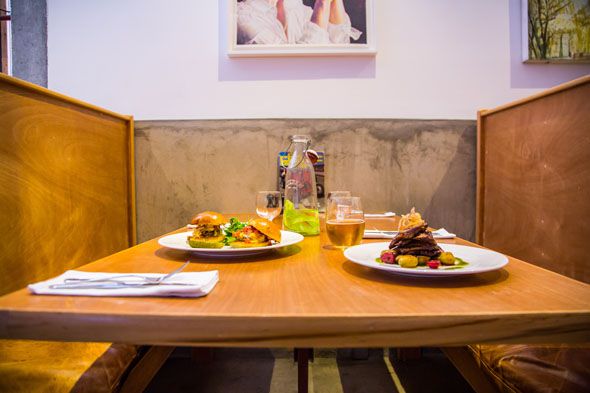 Meanwhile, the cheeseburger and chili burger sliders (Dhs55) were meaty and spicy both encased in a lovely little brioche bun. We could have eaten about five.

Elsewhere on the menu you’ll find lots of breakfast options including French Toast (Dhs45), poached eggs with spinach and sourdough (Dhs45), and a fried egg, bacon, Portobello mushroom in a potato bun (Dhs35) – available all day.

Then there are the desserts: a chocolate cheesecake (Dhs25), a lemon tart (Dhs25) and the strawberry shortbread (Dhs25) – the latter a little delicate tower of butter biscuits, creamy lemon curd and fresh berries. 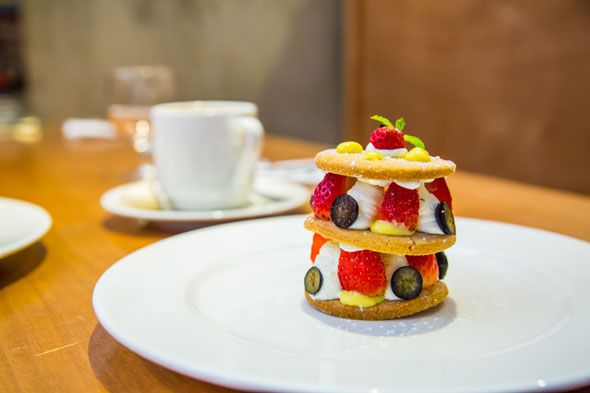 “We’re about to launch our winter menu and our winter show, with new food, apparel, artwork, and new collaborations,” explains Jonathan. “Collaborations is at the heart of Cabin. What I’d love to do is get Tilda Swinton to design a shoe, and we get a cobbler in Bur Dubai to create it – wouldn’t that be brilliant? And, we’re going to launch our painting lessons on the roof, which is really, really exciting.”