And in the middle of a sweltering Dubai summer, no less…

Snow is a hard thing to come by in this part of the world. In fact, outside of Ski Dubai (and a rare spotting at the very peak of Jebel Jais) you’re going to need to travel a fair distance if you hope to experience it. Doubly so in the summer months.

Which is why we’re hugely impressed by the appearance of a fully-fledged snowman right here in our lovely emirate. And it’s not where you might think, either.

To mark the anniversary of the hottest day ever recorded in the UAE – that’s 52.1-degrees on July 30, 2002 for those playing at home – The Heart of Europe on The World islands off the coast of Dubai has built it’s very own snowman, top hat, scarf and all. 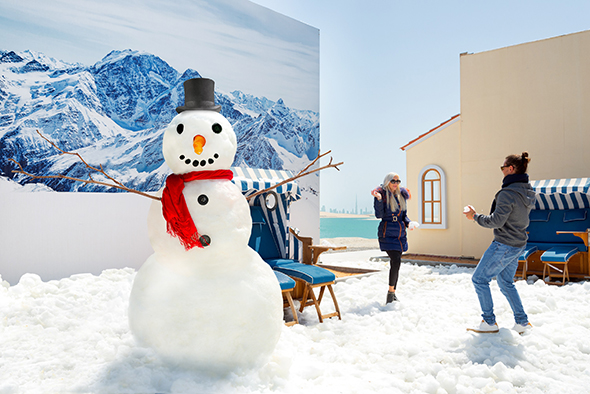 The Heart of Europe is a cluster of six islands on The World that is set to hand over its first lot of properties by the end of 2018. One of the things that makes the mega development so unique (aside from it being on an island shaped like Europe, of course) is the ability for residents and visitors to experience incredible phenomena like, you guessed it, snow falling on the streets.

The creation of Dubai’s first summer snowman was used to demonstrate the viability of the prototype machines that will eventually power the temperature-controlled streets that will form part of the area.

Sadly, it doesn’t look like the public will have access to the snowman for now, but it does get us a bit more excited for what will be possible once The Heart of Europe finally opens.