Psst… is that Tom Cruise sitting over at that table?

Dubai is a popular stopover and mini-break destination for the world’s rich and famous – and while they’re here, they need to eat.

So if you’re wanting to know where you have the best chance of rubbing shoulders with an A-lister, we’ve rounded up the top 10 celebrity-approved restaurants and bars in Dubai where you’re most likely to see a star.

Located on the 122nd floor of the Burj Khalifa, it’s the world’s tallest restaurant, and the levels of star power this fine-dining spot attracts are equally lofty. Famous faces who have dined here include Mariah Carey and Will Smith.

This Caribbean-inspired eatery in the Sheraton Grand Hotel is practically a compulsory stop for A-listers passing through the emirate. Celebs spotted here include Bella Hadid, Rihanna, and Ed Sheeran (who enjoyed a feed of jerk corn, hot pepper shrimp and jerk chicken before his sold-out concert at the Autism Rocks Arena).

It was great to host @arod and @jlo at @nobudubai. Special thanks to @therealnobu for making it extra special ✨

The original Nobu in New York is a firm celebrity favourite, so it’s no surprise that the outlet in Atlantis, The Palm is popular among stars holidaying in Dubai. With the likes of Jennifer Lopez, Khloe Kardashian, and David Beckham all having tucked into the famous miso black cod, the real question is, who hasn’t dined here?

Homegrown Anatolian restaurant Ruya has welcomed an impressive and diverse mix of stars since opening its doors. From the entire Everton football team, to Boris Becker and Roger Federer catching up over dinner, Colin Clague’s place has seen its fair share of stars.

Last night in Dubai ✨Thanks for all the love?? Absolutely loved bringing @TS5 to @virginradiodxb @redfestdxb then the opening of @draisdxb and to round it off @whitedubai tonight. May have to start doing a @TS5 residency out here ? #TS5

There’s no doubt Buddha Bar in Dubai Marina’s Grosvenor House is the place to see and be seen. Just who exactly might you see? Well, football legend Ronaldinho and R&B superstar Craig David have both been snapped here.

Will Smith partying with us at Cavalli Club pic.twitter.com/de3ZJ0Oug3

This iconic party spot in the Fairmont Dubai has played host to countless VIP guests throughout the years, including Justin Bieber, Jennifer Lopez and Will Smith.

It was the restaurant which gave the world Salt Bae, and naturally, every A-lister wants one of Nusret Gökçe’s signature sprinklings. Among the stars who have been snapped at the Dubai branch is Leonardo DiCaprio, who had has steak personally seasoned by Salt Bae himself. 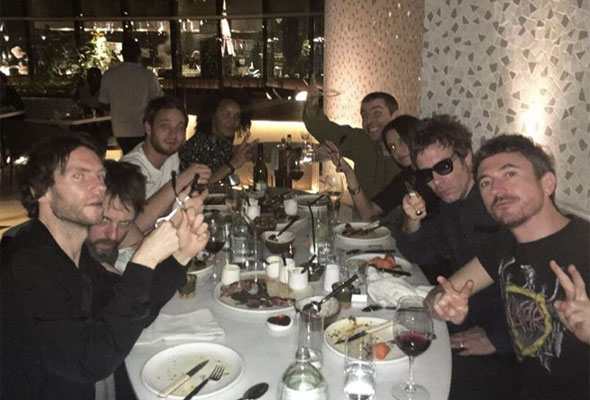 You would expect this lovely restaurant on the top floor of Dubai Opera to be frequented by a star of the stage or two. But we couldn’t help but be a little surprised when none other than former Oasis rocker Liam Gallagher headed there after his Party in the Park gig.

The London branch of this tropical-themed bar is said to be a favourite of Prince Harry, and the Jumeirah Beach Hotel spot seems to be just as popular among the British celebs. James Arthur made an appearance in December, while Irish pop star Niall Horan was spotted partying here in January.

If you’re a fan of British reality TV shows, you should definitely head to this hotspot in the Rixos Premium JBR. Reality stars who have been spotted there in recent months include Made In Chelsea star Oliver Proudlock (and his model girlfriend Emma Connolly), and TOWIE star Amber Turner.