Two of the three will open this week…

Just as Soho Garden was preparing to close for Ramadan, the one-year-old complex announced that they would be launching three new concepts over summer.

The team has clearly been hard at work as the brand-new bars are almost ready to open their doors. Two of the three bars will launch when Soho Garden returns on the first day of Eid, which has yet to be called. 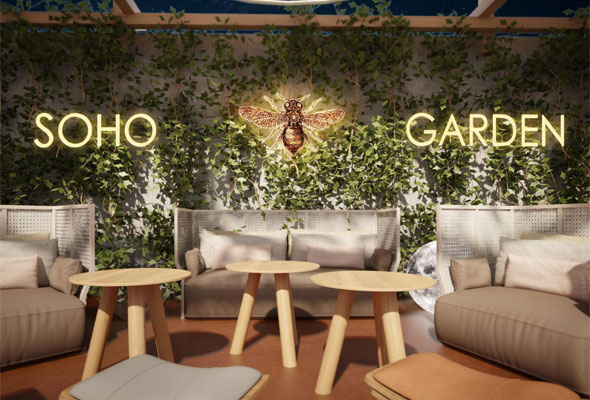 ALSO READ: 40 things to do in Dubai for Eid Al Fitr this week

The first of the three venues is Glasshouse by Soho. From what we can gather, this is an extension of the existing bar which was in the centre of the venue, as you arrive. The fully air-conditioned space will be completely covered by glass. Promising London Soho vibes, the brasserie and bar will offer a fine dining menu with signature twists on classic cocktails – perfect for a chic date night, or those coming straight from work.

Next we’re jumping from England to Japan, as Soho Garden brings you Tokyo Vibes. In contrast to the relaxed setting of Glasshouse, Tokyo Vibes will be a lively Japanese-style eatery, serving up fresh sushi and Japanese cocktails. Although small in size, it promises plenty of atmosphere, with best in bohemian and melodic, deep and commercial house music. This week will see urban music playing on Tuesday and Wednesday and house music from Thursday through to Saturday.

Finally, Soho has another release up its sleeve, although we’ll have to wait a little longer for this one. Code is due to open on Friday June 21, and is planning a big launch party to go with it. The new club will showcase a performance by Lebanese/British DJ and producer, Nicole Moudaber. The look and feel of the club remains a mystery but from by the looks of Glasshouse and Tokyo Vibes we’re looking forward to seeing what Soho Garden will come up with.

Soho Garden will open from the first day of Eid until Saturday June 9, and then Wednesdays, Thursdays and Fridays from 7pm ’till 3am. Code will open on Friday June 21.

Bars
EDITOR’S PICKS
13 Sheikh Hamdan-approved restaurants in Dubai
READ MORE
Dubai brunches temporarily banned in new preventative measures
READ MORE
12 upcoming Dubai mega-projects we can't wait for
READ MORE
16 of the best beach bars in Dubai for sundowners
READ MORE
MOST POPULAR
St Patrick's Day 2021: The best deals and celebrations in Dubai
Dubai Police add a new supercar to their fleet
Run even faster with Under Armour's groundbreaking new trainers
Dubai Culture to grant 1,000 long-term cultural visas
This Abu Dhabi island brunch offers an amazing family friendly escape
YOU SHOULD CHECK OUT
Our website uses cookies and other similar technologies to improve our site and your online experience. By continuing to use our website you consent to cookies being used. Read our privacy policy here.