Burgers range from Dhs50 to Dhs500, and the menu also features a Dhs200 “Golden Saltbae Shake”

Salt Bae, aka Nusret Gökçe, first announced back in March 2019 he was going to open a burger joint in Dubai’s DIFC, and it’s finally opens its doors today, Monday November 4.

Taking to Instagram, the famed chef shared a first look inside the restaurant, called Saltbae Burger, which replaces Peyote in DIFC’s Gate Village 2.

In a series of videos shared with his 23.7 million followers, Salt Bae gives an insight into both the food and drink menu, as well as what the venue looks like. 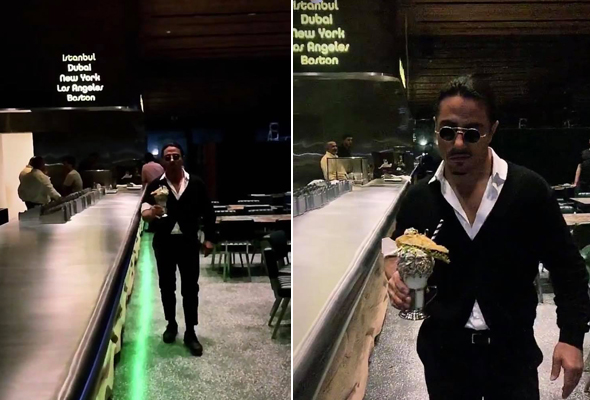 To drink, guests can opt for one of Saltbae Burger’s crazy shakes, which include options like baklava (Dhs65), Oreo (Dhs65) or the Dhs200 “Golden Saltbae Shake”.

On the opening menu, there are nine burgers. Burgers vary in price from Dhs50 for the Wet Burger, which Saltbae took to Instagram to describe as a “must-try”, to Dhs500 for the Golden Burger; a smoked rib eye patty with caramelized onion, aged cheddar cheese and edible gold leaves.

Other options include a slider trio for Dhs80, vegetarian burger for Dhs60 and the Dhs100 Saltbae Burger, a beef burger with smoked beef rib eye, caramelized onion and cheddar cheese.

All options come with fries, aside from the Wet Burger, with four options of fries also on the menu; French fries, parmesan truffle fries, sweet potato fries and onion chips. 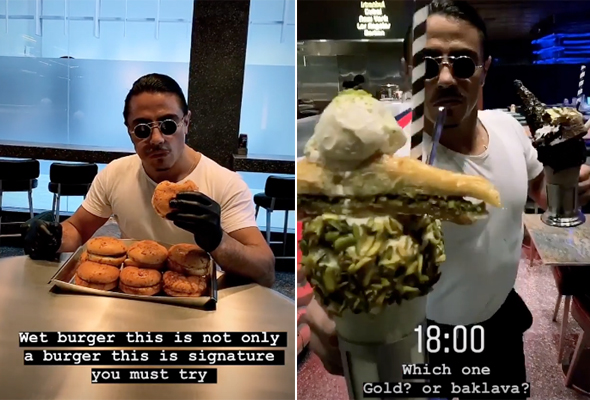 The restaurant boasts an industrial-looking interior, with a mix of wooden and metal tables and counter tops scattered with dark leather chairs. There are also several huge images of Salt Bae-mid-salt-sprinkle adorning the walls, as a not-so-subtle reminder of the man at the helm.

Now open for lunch and dinner, DIFC diners have already taken to social media to share snaps from the restaurant’s first day of opening.

Although this is the first restaurant named under the Saltbae Burger name, the chef does already have a chain of burger restaurants across Turkey and New York called Nusret Burger. A nod to these restaurants is found in a neon sign above the bar inside his DIFC outpost.

Salt Bae’s original Dubai restaurant in Jumeirah Four Seasons, Nusr-et, has been frequented by stars including Paul Pogba, Rio Ferdinand, DJ Snake, Leonardo DiCaprio and even Vice President of the UAE and Dubai ruler H.H. Sheikh Mohammed Bin Rashid Al Maktoum, so we wonder if his casual burger joint in the financial district will draw in a similar A-List clientele.

Saltbae Burger is the first of an influx of new concepts making their way to DIFC, which include soon-to-open restaurants Amazonico, Indochine and Shanghai Me.

We’ll be sure to update you as soon as we have an opening date confirmed.

Eat & Drink
Restaurants
EDITOR’S PICKS
9 royal-approved Dubai restaurants
READ MORE
12 incredible rooftop pools in Dubai to check out
READ MORE
16 of the best beach bars in Dubai for sundowners
READ MORE
Covid-19 rules in Dubai: all the updates you need to be aware of
READ MORE
MOST POPULAR
Join us for a preview of Fairmont Bab Al Bahr's Valentine's dine around
Covid-19: Dubai updates travel rules for inbound passengers
The W Abu Dhabi's Wet Deck pool party is absolute weekend goals
7 amazing art sculptures in Dubai you need to check out
Flash sale: 50 per cent off stays at this luxury Palm Jumeirah resort
8 brilliant things to do in Abu Dhabi this weekend - January 28 to 30
YOU SHOULD CHECK OUT
Our website uses cookies and other similar technologies to improve our site and your online experience. By continuing to use our website you consent to cookies being used. Read our privacy policy here.