Are you looking for a new haunt in Dubai to catch all of the big sports games? If the answer is yes, we have some news. A huge new sports garden has opened at Grand Plaza Mövenpick in Dubai’s Media City, and we can’t wait to check it out.

It’s set up in the ‘ballroom’ of the hotel. Think British beer garden vibes, right from the fake turf flooring to the pub benches and even beer barrels dotted around. Expect a fun atmosphere, great music, casual food and some drinks deals.

Huge projector screens are in place around the venue, where all live and non-live sports games will be shown, every day. Even if you’re not a huge sports fan, we think the ‘Grand Garden M’City’ is going to be a great new hangout spot. 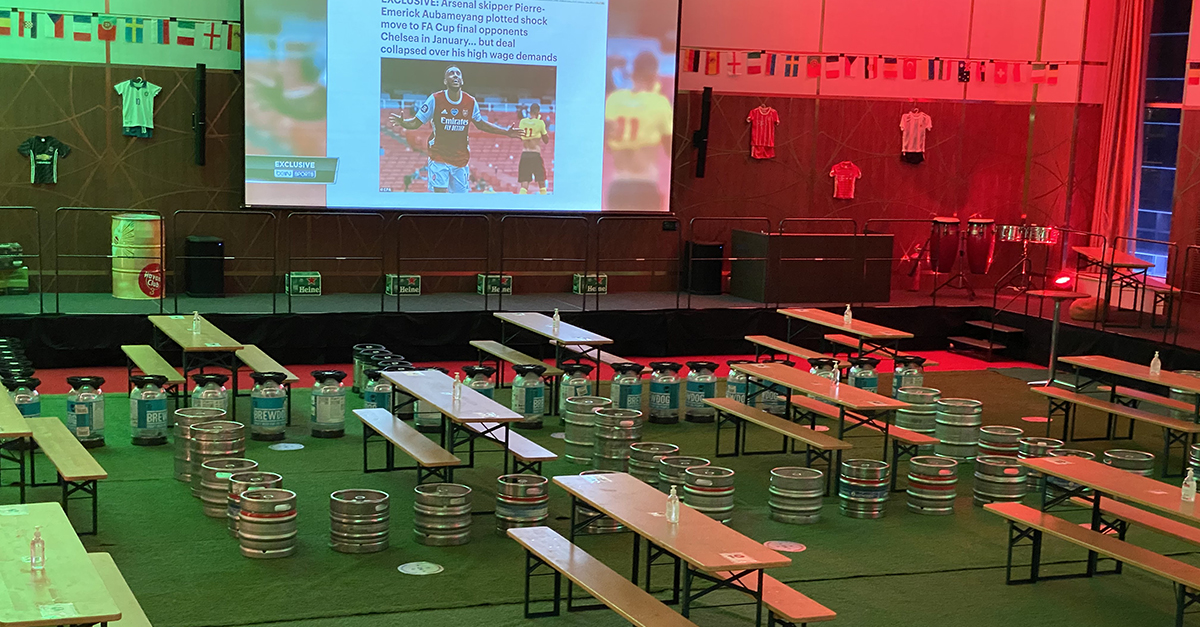 A new family-friendly brunch is launching at The Scene
Get month-long access to two amazing Dubai waterparks for Dhs199
It's back! Check in to the What's On staycation at Media One Hotel

The food is described as ‘stadium-style’, with lots of hearty dishes to dig into, or share. Pizzas, nachos, burgers, crispy calamari, bangers and mash, house-made stuffed jalapeño poppers and chicken wings are all on the menu.

A wide range of drinks are available, including beers, wines and spirits. A daily happy hour will also run from 9pm to 10pm, with selected beverages included, priced from Dhs25. When the sports isn’t on, the atmosphere will be set, with great music coming from the surround system.

Social distancing will be observed at all times in the venue, with spaced seating, however it can accommodate up to 120 people comfortably. It’s air-conditioned, and will be open every day from 8pm to 2am, up until August 31.

Just some of the top sports games that will be shown include The UEFA Champions League, UEFA Europe League and Formula One.

Eat & Drink
Sport & Fitness
Things to do
EDITOR’S PICKS
Here's the full list of UAE public holidays in 2023
READ MORE
23 incredible things to look forward to in the UAE in 2023
READ MORE
Hidden gems: 10 UAE desert pop-ups to discover this winter
READ MORE
Where to travel in 2023: 10 new flight routes from the UAE
READ MORE
MOST POPULAR
W Abu Dhabi will host a second edition of its sustainable Looped In menu
The UAE law changes on marriage, divorce and child custody to know about from February 1
5 fabulous new Dubai hotels to check-in to
Pics of the week: Your best photos of the UAE
Dhow & Anchor has got you covered every day of the week
YOU SHOULD CHECK OUT
Our website uses cookies and other similar technologies to improve our site and your online experience. By continuing to use our website you consent to cookies being used. Read our privacy policy here.