Italy in Dubai: What to expect from The Heart of Europe's first hotel

Six hour flight? No, Italy is just a 15-minute boat ride away…

The World Islands is a one-of-a-kind project, and one developed in line with HH Sheikh Mohammed bin Rashid Al Maktoum, Ruler of Dubai’s vision for the future of Dubai’s tourism sector. A large part of this development is The Heart of Europe – a Dhs18.3 billion fully sustainable project comprising of seven distinct islands.

While we’ve seen many updates over the last few years as the concept has progressed, nothing has been as exciting as the idea that the project’s first hotel is nearing completion. Portofino is located on the island known as ‘Mainland Europe’, and will be a 463-suite five-star family resort inspired by the Italian destination.

What’s On took a tour around Portofino to see how the hotel is finalising its build. 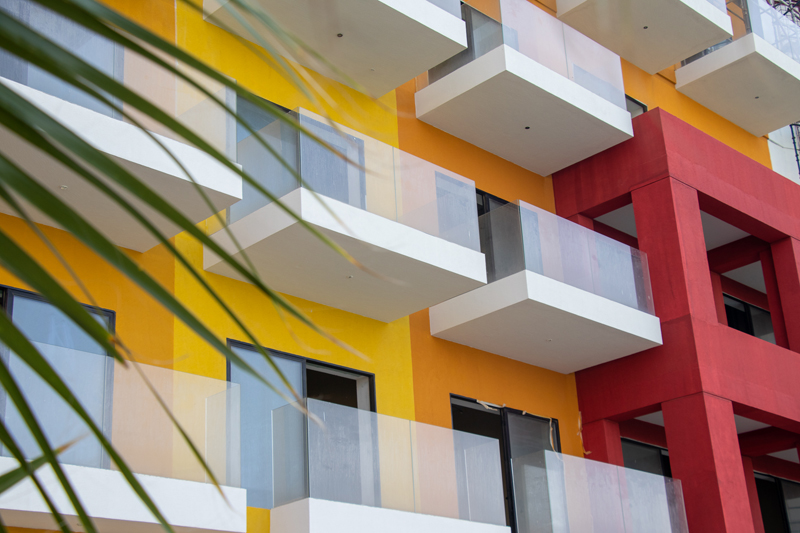 Before you reach the hotel, you’ll need to take a 15 minute boat ride from the fishing harbour at Jumeirah 1. The island is located four kilometres from the shore, meaning you’ll be transported from Dubai to ‘Europe’ in less than half an hour. There’s a small jetty at the front of the hotel to drop off and pick up guests and then you’re standing in front of the main lobby. 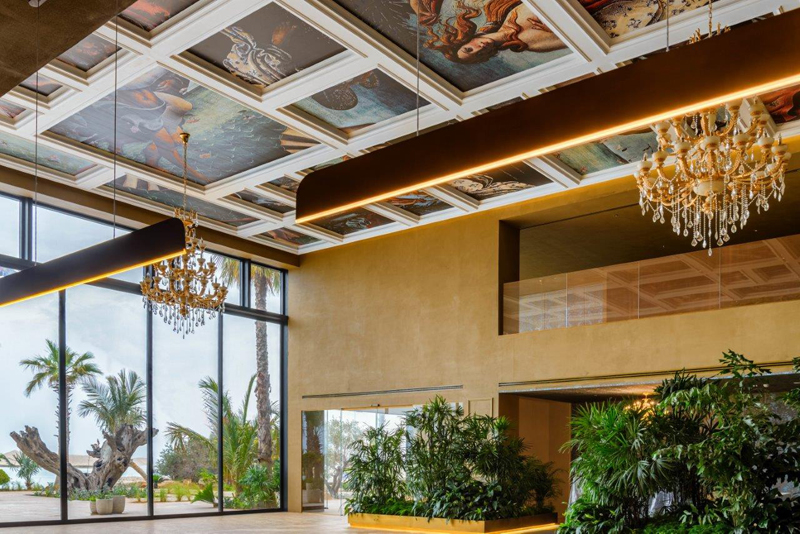 Inspired by the Italian Riviera village of Portofino, the namesake hotel is painted with a warm and colourful palette, mixing reds, oranges and yellows across the facade. The top level is still under-construction, but once ready will be an entire floor of hanging plants, which will spill out from above and trickle down the front of building. All of the trees are denotive of those grown in Italy, including the massive olive trees imported from the region with no less than 100 years behind them.

The lobby is located behind a two-storey glass wall so guests can enjoy the sea view as they check-in. The first thing we noticed upon entering was the ceiling, not a normal occurrence but this one caught our eye thanks to a huge Renaissance-style painting which has been chopped and changed like a sliding puzzle and accessorised with two huge chandeliers. A bright blue waiting area sits on the left of the courtyard style lobby, with cyan damask wallpaper and black suede armchairs. 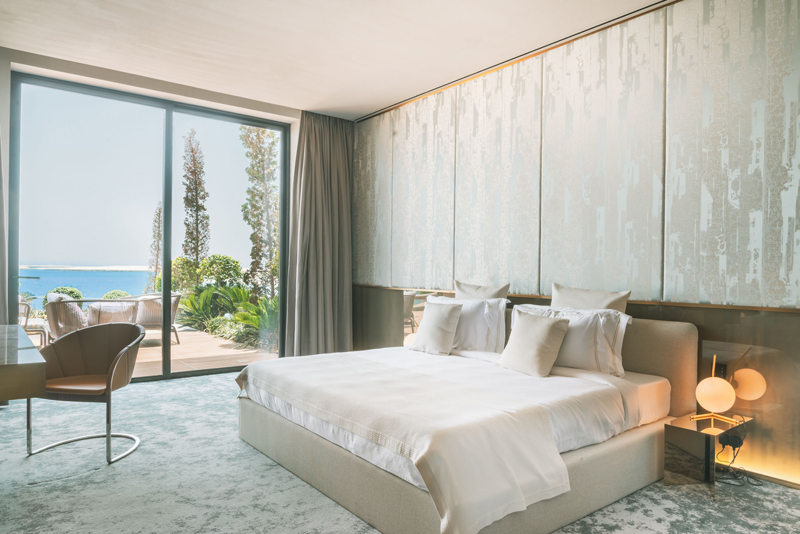 Portofino is a family-only hotel meaning only guests who have children will be able to book and stay in the resort. The corridor, or ‘gallery’, has extra thick doors and padded walls, presumably to muffle sound, and each room has a specially designed play area for children, which sits beneath a raised single bed.

The open-plan suite has been divided with a digital wall which doubles up as a TV, and the entire room is smart-controlled from your mobile phone. There’s plenty of storage and the wardrobes doors have a dark translucent filter so you can easily see your belongings through them. On the ground floor, the rooms have an outdoor patio to sit and watch the world pass by, plus there’s a sandpit for the little ones. 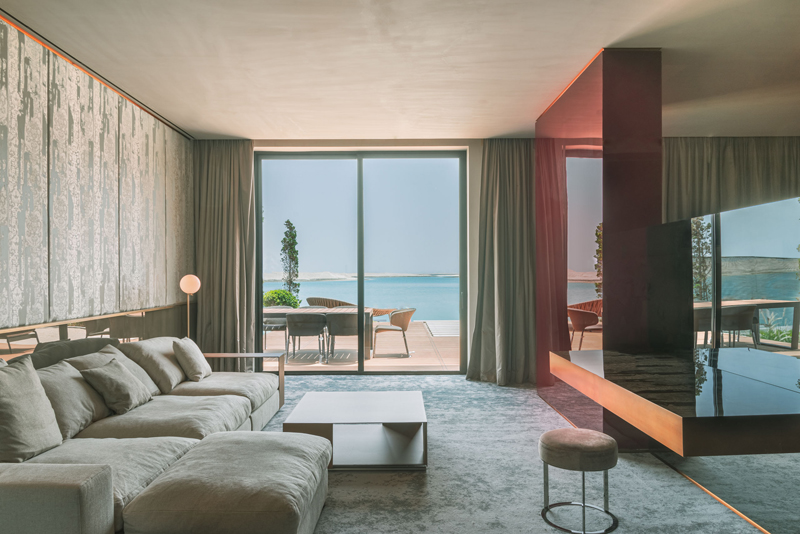 The Heart of Europe developers, Kleindienst Group, are keen to make the experience as close to the real thing as possible, saving guests’ time, money and carbon footprint. All staff will speak Italian, to create an authentic feel, and Mainland Europe has many exciting projects designed to make you feel as though you’ve been transported to another continent.

All of the lavish new hotels set to open in Dubai soon
Weird weather: This new street in Dubai will see rain all year round 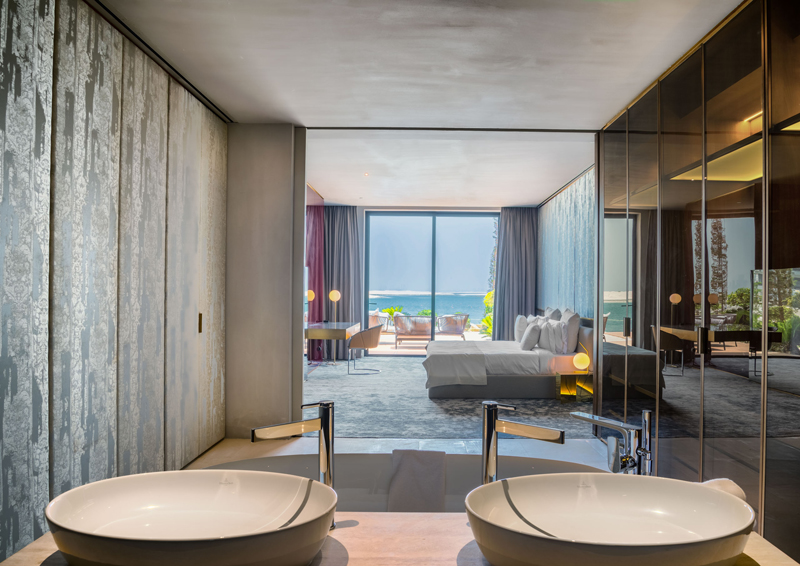 One of the most exciting things about the hotel is its commitment to marine life in the region. Portofino will have 514 aquariums, one for each species of fish in the Arabian Gulf. The Coral Institute is located onsite, where biologists are accelerating the growth of natural coral production, to be placed back in the sea and serve the local sea life.

There will be five swimming pools in the hotel, one is Olympic-sized and will feature awe-inspiring live performances, water ballet and synchronised swimming acts, which guests can view from and underwater restaurant.

When can I go?

Portfino is part of The Heart of Europe’s Phase I opening plan, which will take place in 2021. We’re told that the hotel will open one of the wings of the hotel at the beginning of next year, if not in December 2020.

Staycations
EDITOR’S PICKS
Exclusive Reveal: Topgolf Dubai is here and ready for action
READ MORE
65 of the best outdoor bars and terraces in Dubai
READ MORE
7 brilliant dining deals in Dubai this month
READ MORE
18 of Dubai's most Instagrammable breakfast spots
READ MORE
MOST POPULAR
The best restaurants at The Pointe with Palm Fountain views
Tough Mudder returns to the UAE this February
This family staycation includes daily tickets to Dubai's top attractions
Britain's Got Talent's hilarious improv troupe to perform in Dubai
The best restaurants on Abu Dhabi’s Hudayriyat Island
YOU SHOULD CHECK OUT
Our website uses cookies and other similar technologies to improve our site and your online experience. By continuing to use our website you consent to cookies being used. Read our privacy policy here.