Staycations
Things to do

For hardcore gamers, there’s a lot of (non-gaming) folk out there who just don’t understand why it is so difficult to hit the pause button mid-game and return to the real world. But when you’re close to defeating a boss, sometimes it’s easy to forget to have a meal or even sleep at night until the level or game is complete.

Well, things are about to change for gamers in UAE as Rove Hotel is about to launch a fun concept called Gamer Caves – the region’s first-ever hotel room that is designed exclusively for gamers.

We aren’t just talking about decals on the wall or neon lights (which the room does have). We’re talking about a room that’s decked out with gaming equipment by Razer – the world’s leading lifestyle brand for gamers in partnership with Playtonia, a Dubai-based technology company. 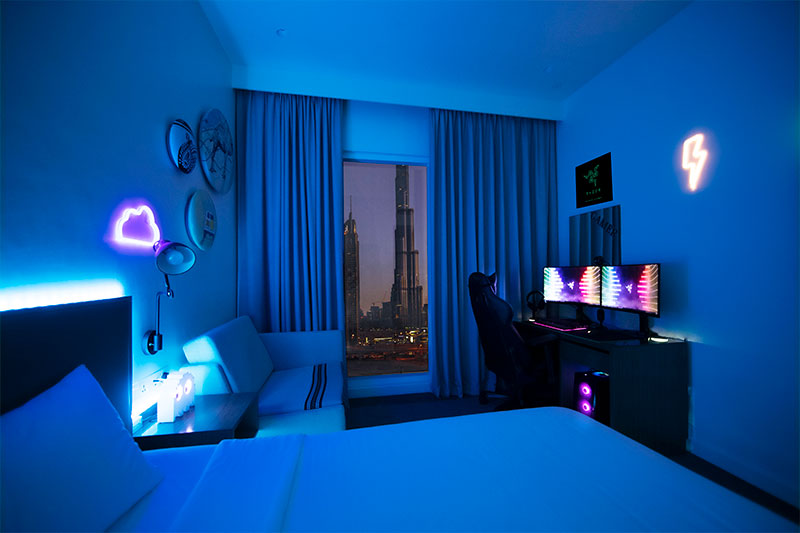 What kind of games will you be able to play? The Gamer Caves will offer a number of titles such as Overwatch, Dota 2, Diablo 3, Grand Theft Auto 5, Doom, Microsoft Flight Simulator, Red Dead Redemption 2, Divinity: Original Sin 2 – Definitive Edition, Final Fantasy XIV Online, and Faster Than Light and more.

Want about meals? Of course, you wouldn’t want to leave the Gamer Cave! But don’t worry. The Gamer Caves will host an in-room dining menu so you don’t have to hit the pause button. Expect to dig into an assortment of game-themed dishes, including the Cloud Strife chicken slider, Lara Croft’s calamari, Kitana flatbread, and many more.

Sounds like a fun-filled day! The Gamer Caves are located at two Rove hotels in Dubai: Rove Downtown and Rove At The Park. They will be available from mid-June, so gamers can enjoy a staycation this summer in front of the screens button-mashing fun to save the world. You can book your Gamer Cave here from June 15.

We can’t wait to check into this room!

Staycations
Things to do
EDITOR’S PICKS
What’s On Nightlife Awards 2021: Here are the nominees...
READ MORE
It's back! What's On Lock In returns to Media One Hotel
READ MORE
Arts and culture: 5 spots we can't wait to visit at Expo 2020 Dubai
READ MORE
UAE petrol prices are set to decrease in September 2021
READ MORE
MOST POPULAR
Celebrity-loved Nobu Dubai launches brunch this October
Watch: Wow-worthy timelapse of Expo 2020 rising up from the ground
Update: Rules relaxed for public transportation in Dubai
Indian restaurant Rang Mahal returns to JW Marriott Marquis Dubai
Review: UDN – Abu Dhabi's first udon house
YOU SHOULD CHECK OUT
Our website uses cookies and other similar technologies to improve our site and your online experience. By continuing to use our website you consent to cookies being used. Read our privacy policy here.