It’s the news we have been eagerly waiting for…

HH Sheikh Mohammed bin Rashid Al Maktoum, Vice President of the UAE and Ruler of Dubai has just announced that the iconic Museum of the Future will be opening its doors this month on Tuesday, February 22, 2022.

In the tweet, the Ruler of Dubai stated, ‘Brothers and sisters, the most beautiful building on earth (and in the Emirates) will launch to the world on 02/22/2022.’

Sheikh Mohammed added that 2022 will be an exceptional year for the United Arab Emirates. 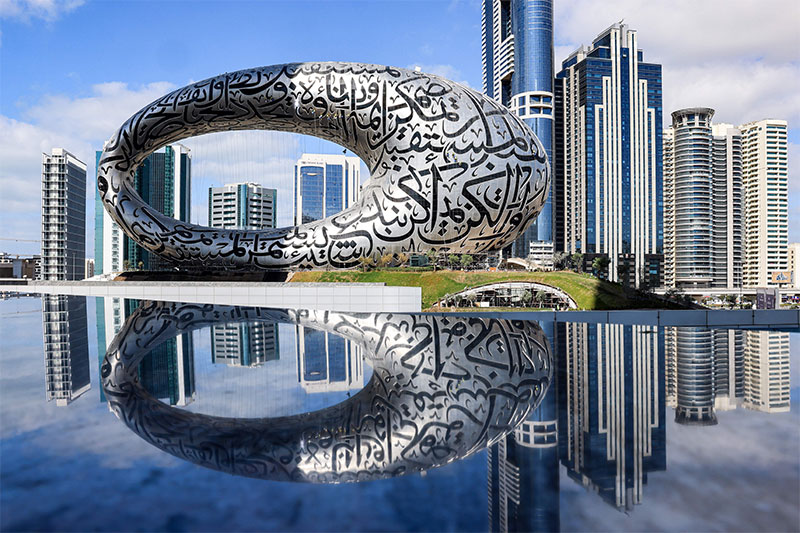 Museum of the Future, one of Dubai’s most ambitious and exciting projects reached its milestone back in October 2020. The ceremony saw Sheikh Mohammed sign the last piece of the panel before it was placed on the structure thus completing the eye-catching facade.

After the facade was completed, work has been quietly taking place on the inside of the museum and now finally, after nearly a year and a half of eagerly waiting, we can finally see what it looks like on the inside.

The Museum of the Future has already been named one of the world’s 14 most beautiful museums just last year, and honestly, no one is surprised.

The list was put out by National Geographic magazine. The jaw-dropping structure is a unique design shaped like an eye with a hollowed-out middle and covers an area of 30,000 square metres and is 7-stories standing at 77m high.

The Museum of the Future will explore the future of science, technology and innovation and Sheikh Mohammed had previously said that it will be ‘an incubator for ideas, a driver for innovation, and a destination for inventors and entrepreneurs from around the world’.

The beautiful calligraphy on the facade of the structure is a quote about the future from Sheikh Mohammed.

It reads ‘We may not live for hundreds of years, but the products of our creativity can leave a legacy long after we are gone.’ and ‘The future belongs to those who can imagine it, design it, and execute it… The future does not wait. The future can be designed and built today.’

We can’t wait to see what’s inside.

Culture
News
EDITOR’S PICKS
Here's the full list of UAE public holidays in 2023
READ MORE
23 incredible things to look forward to in the UAE in 2023
READ MORE
Hidden gems: 10 UAE desert pop-ups to discover this winter
READ MORE
Where to travel in 2023: 10 new flight routes from the UAE
READ MORE
MOST POPULAR
Pics of the week: Your best photos of the UAE
Dhow & Anchor has got you covered every day of the week
RTA: All the road closures you need to be aware about
Review: The Nice Guy Dubai
Masha and the Bear is coming to Abu Dhabi this April
YOU SHOULD CHECK OUT
Our website uses cookies and other similar technologies to improve our site and your online experience. By continuing to use our website you consent to cookies being used. Read our privacy policy here.