The find is forcing a rewrite of the history books…

The remains of an 8,500 year old structure, comprising of a series of complex walls, has been discovered on Abu Dhabi’s Ghagha Island.

And it’s a pretty big deal because it pushes the earliest date of the existence of these sorts of buildings in the region back by a whole half a millennium. But, perhaps more interestingly, it also means that the area now represented by the UAE was very likely once an important hub of neolithic innovation. The drive to create pioneering engineering projects clearly goes deep. 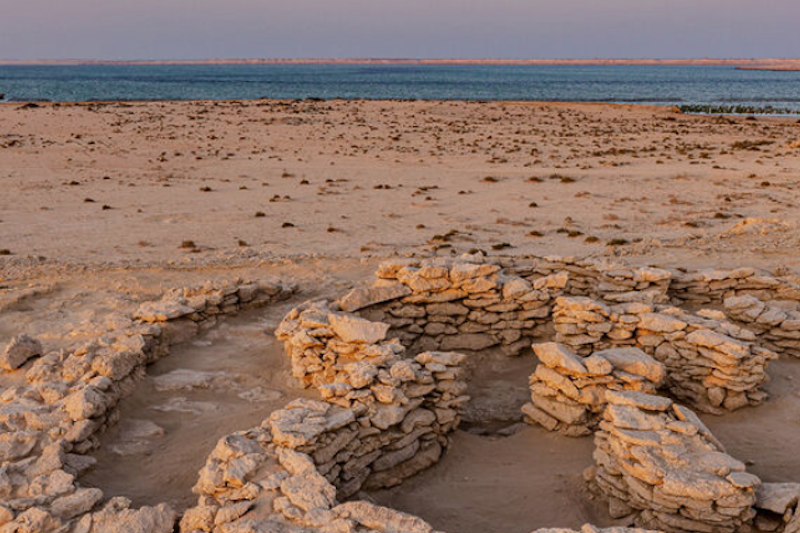 The excavation of the site was carried out by archeologists attached to the Department of Culture and Tourism — Abu Dhabi (DCT). Dating the construction was made possible by carbon-14 analysis of charcoal fragments found within the structure. And the date of 8,500 years is within the conservative range of estimates.

Digging up the past

To help you wrap your head around the sorts of dates being thrown around here we’ve put together some historical yardsticks for you. A mere 500 years ago, we’re talking about a pre-scientific revolution world, pre-Galileo — the sort of epoch where leaches were still being used for medicinal purposes, an age of monarchs like decapitation-enthusiast Queen Elizabeth I, and drama care of characters such as William Shakespeare. Go to 2,000 years ago, and we’re looking at the birth of the Roman Empire which occurred a little after the rise of the Qin Dynasty in China; 2,500 years ago it was the dawning of the Persian Empire; the pyramids were built around four and a half thousand years ago (which marks roughly the halfway point between our time now and the build date of these newly discovered structures).

The rise of the earliest known civilisation, the Sumerians, began about 7,000 years ago — meaning this find, predates the first murmurs of organised human civilisation by about the same length of time that has elapsed between now and the death of Attila the Hun.

What are these structures?

History lesson over, what exactly was found on this dig? The excavations uncovered a series of small round rooms, with stone walls that even now extend to nearly one metre in height. These were almost certainly dwellings, possibly part of a larger network, housing a fixed community that may potentially have lived on the island year-round.

Within the structures, literally hundreds of artifacts were discovered, these include — impressively carved stone arrowheads that would have been used for hunting.

What does this settlement tell us about the UAE’s past?

This discovery and others like it on (what was at the time) ‘the fertile coast’ — predated maritime trade routes, so we know there were noncommercial factors involved in drawing people out to these islands.

Environmental conditions, such as the cooling coastal breeze, and biological abundance of the surrounding waters are likely key reasons why the settlers chose these spots.

Talking about the finds, HE Mohamed Al Mubarak, Chairman of DCT — Abu Dhabi, said: “The discoveries on Ghagha island highlight that the characteristics of innovation, sustainability and resilience have been part of the DNA of the inhabitants of this region for thousands of years. The finds reinforce an appreciation of history, as well as the deep cultural connections between the people of the UAE and the sea.”

“We are also reminded that there is still much to discover across the Emirate of Abu Dhabi, and that it is vitally important we continue working to discover, preserve and protect our invaluable heritage for current and future generations to learn more about our ancestral past.”

Other archeological treasures in the UAE

Those with a passion for ancient history have some incredible opportunities to explore local finds here in the UAE. There are of course, the treasures contained within museums such as Louvre Abu Dhabi.

But if you’re the sort that likes to get out in the field and experience the heritage in-situ, there are plenty of archeological adventures to be had right here. Indian Jones hat optional.

There is, for example, the remains of an ancient monastery on Sir Bani Yas island — originally discovered in 1992, the Church and Monastery of Sir Bani Yas is available to visit for those willing to make the trip to the island. The site is located on the eastern side of Sir Bani Yas and is 1,400 years old, making it the oldest Christian site in the UAE. The complex is said to have housed about 30 monks and included a church, a courtyard, a kitchen and dormitories where the monks prayed and slept. Sir Bani Yas Island. Tel: (02) 406 1400 visitabudhabi.ae

20 places to experience the real culture and history of Abu Dhabi
Exploring Abu Dhabiâ€™s hidden worlds of Culture and Cuisine
Review: Experience the sights and sounds of Africa in the UAE

There’s also the Hili Archeological siite. This site contains the largest collection of tombs and buildings from the Bronze and Iron Ages, found in the UAE. Visitors can see structures from an early agricultural settlement, with roots in the region’s past as far back as 3,000 BCE.

The Jebel Hafit tombs represent another important archaeological site in Abu Dhabi, these 5,000 year old tombs date from the very dawn of the Bronze Age. This necropolis is home to 500 or so rocky coffins, each made from mounds of unworked stone. Within the grounds of the tombs, several objects of interest were excavated, including ceramic vessels and items forged from copper. One of the best ways to learn about and experience these tombs is by joining up with a guided tour from the nearby Jebel Hafit Desert Park. Going back even further, stone tools dating back more than 300,000 years, have been found in surveys around this location (providing more evidence of the UAE’s pivotal role in the dispersal of humans out of Africa and across the wider world); Al Ain. Tel: (03) 711 8362. jebelhafitdesertpark.com.

The Miocene Trackways are a series of footprints laid by a herd of a, now-extinct, species of elephant, from around six to eight million years ago.

Culture
News
Things to do
EDITOR’S PICKS
Here's the full list of UAE public holidays in 2023
READ MORE
23 incredible things to look forward to in the UAE in 2023
READ MORE
Hidden gems: 10 UAE desert pop-ups to discover this winter
READ MORE
Where to travel in 2023: 10 new flight routes from the UAE
READ MORE
MOST POPULAR
The Wizarding World officially comes to Dubai
11 homegrown UAE restaurants that have gone global
13 new brunches in Dubai that will spice up your February
You can now tour these 12 ladies' nights on Yas Island
Sweep your special someone off their feet at TH8 Palm Jumeirah
YOU SHOULD CHECK OUT
Our website uses cookies and other similar technologies to improve our site and your online experience. By continuing to use our website you consent to cookies being used. Read our privacy policy here.