What’s On speaks to Colonel Chris Hadfield, the first Canadian astronaut to command the International Space Station and author of the best-seller An Astronaut’s Guide To Life On Earth, ahead of the Emirates Airline Festival of Literature.

If that wasn’t enough, the Canadian retired astronaut is also the author of the best-seller An Astronaut’s Guide To Life On Earth and has a children’s book called The Darkest Dark coming out in September.

We talked zero gravity, Canadian pride and those epic earth views ahead of his appearances at the Emirates Airline Festival of Literature, running until March 12.

But once the engines are shut off, your ship is healthy and you’re safely in orbit then, of course, the urge of all astronauts is to unstrap and pull yourself to the window see the Earth – and it does not disappoint. It’s awe-inspiring.

You realise the privilege of being one of the first to see it, but it’s also just inherently beautiful and, as you’re going eight kilometres a second, you cross entire continents in just a couple of minutes. So the variety and constantly refreshed beauty of it… you feel an enormous sense of honour and privilege. It’s like walking into a huge cathedral, but it’s eternal and natural. 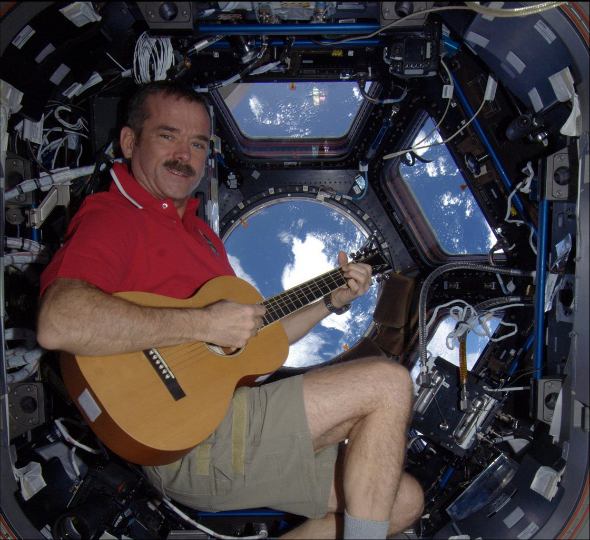 What’s the most fun thing about zero gravity?
The fun is that you can fly! I mean, imagine right now that you could fly, imagine how much fun that’d be. That you could just push off with your toes and fly across the room or do 1,000 somersaults. It’s like having a super power, it’s just joyful and you have fun with it.

But without gravity you inevitably go tumbling across the room and then lose the other shoe as it goes floating off too. I tried to become elegant and skilled at it, but it frustrated me every time.

Space must be a terrifying place and we know there was a moment on a space walk where you were momentarily blind. How do you begin to deal with any fear or stress?
Things aren’t scary; people are just scared. You can be scared by something trivial; riding a bike is terrifying at first, or learning to drive or dating or, I don’t know, juggling. I think the real key for all of those, including space flight, is to become good at it and to prepare properly. That’s why our training is so deep.

So in truth space flight isn’t scary. If they just grabbed you right now, put you in a rocket ship and said ‘you’re launching in 15 minutes’ that would be scary. But instead what happened to us was they said ‘okay, we’re going to train you for the next 15 years and put you in simulators where you’re going to see everything that could go wrong over and over’, so you’re no longer afraid, you’re excited, you’re keen and that’s how we deal with the stress.

That’s how I deal with all stress in life, to try and use the time that I have to become as ready for things as I can; it makes life much more enjoyable. 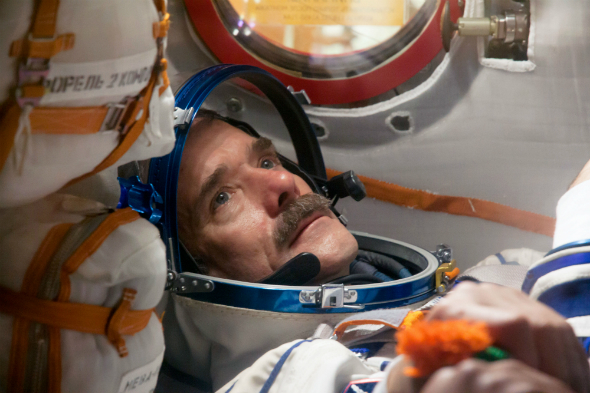 Even with all the preparation, was there anything that surprised you on your first space flight?
Everything was sort of a delight. You’d thought about it, you’d visualised it and practised it, but simulators are all limited and inherently flawed. The reality of weightlessness is much better than the brief simulations we have on earth.

But really, the thing I don’t know how you can possibly prepare for is the magnificence of seeing the earth itself. It might sound trite but it’s true. You go around the world every 92 minutes and the earth turns underneath you, so you circle the world 16 times a days and every time it comes around it’s a new part of the world and it’s different because of weather patterns and changing seasons. It’s gobsmackingly gorgeous.

You famously covered David Bowie’s Space Oddity from the International Space Station. What’s your favourite Bowie song?
I’ve been a musician all my life and [before that] I’d never played a David Bowie song in my life. It’s just ostentatious to try and cover Bowie. He was brilliant and so inexhaustibly creative and dissatisfied with the status quo, but also such a pleasant, visionary and gentle guy. I have huge respect for him.

I don’t know that I have a favourite song. I guess, back in the 70s he did a quick cameo on a Bing Crosby Christmas special where the two of them sang, of all things, The Little Drummer Boy, but the beauty of it was the unabashed chat between the two of them before they sang.

I also listened to and watched Lazarus off of his latest album, his last album, which is such a tortured, revealing and magnificent song that was his dying gift to the world. I don’t have a specific favourite; he is one of my favourites.

After all that time in space, what’s life like back on earth? Do you see the world differently?
When you’ve flown in space you definitely return a different person, but it’s not in the way you might think. It’s not like you spend five minutes in space, look out the window and suddenly have an epiphany.

A large part of it is that to become an astronaut the odds are so overwhelmingly small and the trail so dauntingly long that you change who you are to actually become one. In this last astronaut selection by NASA, 18,300 people appied for a very small handful of jobs.

Once you’re hired then you train for years and it’s a slow iterative sculpting of yourself. Then of course, when you’re up there the deamnds are huge: the combination of weightlessness, the complexity and the work that’s involved – we were running about 200 experiments on the space station – then there’s also the magic of the entire world, which becomes as familiar to you as your hometown. Once you emerge from all that, you’re definitely not the person you were when you started.

I think you have a greater confidence in yourself and a permanent sense of optimism. Also there’s this feeling of responsibility as a citizen of the world. Just seeing the whole world like that, it’s very difficult to retain the façade of ‘us’ and ‘them’. I’ve been around the world 2,650 times and it’s difficult to draw a line in the sand anywhere, because the whole world is absolutely just one place in my mind. 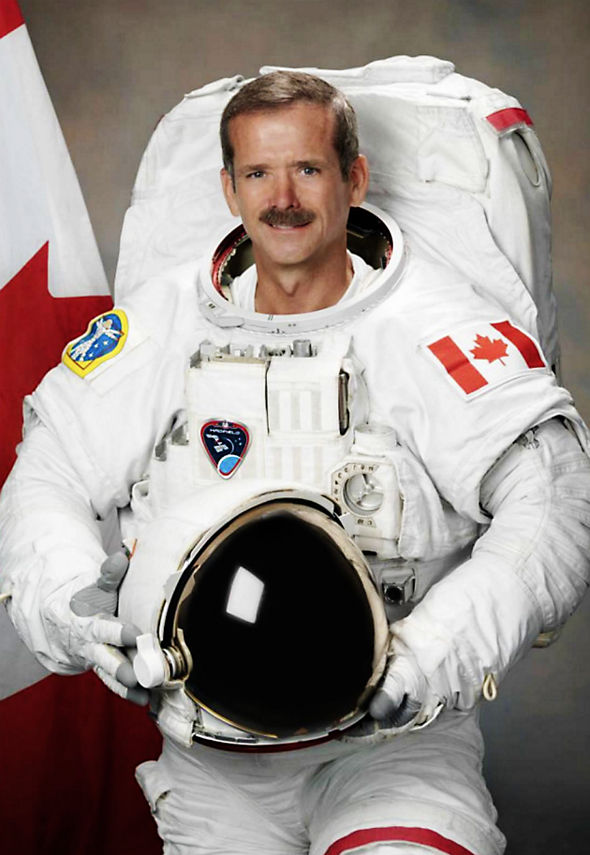 What does space sound like?
Sounds are waves and they need something to move them along so there’s absolutely no sound in space. Otherwise, think how loud the sun would be – it’s a billion thermonuclear explosions a second.

Inside the ship it’s noisy, because the machinery that keeps you alive is constantly running. So it’s pumps and fans and whirring machinery, the toilet is especially loud and the exercise equipment. Then if you’re quiet by the hull you can hear small rocks from the universe hit the spaceship.

There are quiet places as well and when you move through these just the movement of the air currents around you make small things move so there’s little tinkeling sounds like small bells. I remember on my first space slight, on the Russian space station, I felt like there were wind chimes following me every where I went, which was kind of delightful.

I am proud to be Canadian, and to represent my country on the International Space Station.

You were the first Canadian to walk in space and the first Canadian to command the International Space Station. Are you a very proud Canadian?
I count myself not only proud, but immensely lucky to be a Canadian. There are so many people in the world that don’t live in a place that’s as nuturing as the place I was lucky enough to be born.

But on the other hand, all of those things, they may have been the first of a Canadian, but much more importantly to me they were firsts for me. So you can say I did the first Canadian space walk, but it was also my first space walk, which in the moment is far more important to you, because you don’t want to mess it up.

It’s only later when you come back and you see yourself through other people’s eyes and people award you that you really see the impact you had on the society that nurtured you.

Culture
News
Things to do
EDITOR’S PICKS
What’s On Nightlife Awards 2021: Here are the nominees...
READ MORE
It's back! What's On Lock In returns to Media One Hotel
READ MORE
Arts and culture: 5 spots we can't wait to visit at Expo 2020 Dubai
READ MORE
UAE petrol prices are set to decrease in September 2021
READ MORE
MOST POPULAR
This new family-friendly brunch includes free cinema tickets
Pics of the week: Your best photos of the UAE
How to use Playkey.me, the region's first supercharged cloud gaming service
The Mai Dubai half marathon is back in October
Exhibitions, workshops and more to experience at Sharjah Art Foundation
YOU SHOULD CHECK OUT
Our website uses cookies and other similar technologies to improve our site and your online experience. By continuing to use our website you consent to cookies being used. Read our privacy policy here.