Another WWE superstar coming to town is the absolute monster of a man Ryback: it hasn’t yet been confirmed whether we’ll be seeing Ryback in the ring, but it seems The Big Guy has other plans for his fans – the chance to train with him.

At 1.91m tall and 132kg, Ryback is undeniably large, and on April 15 at TK MMA & Fitness, Ryback will work out with a few of his biggest fans.

The session includes a one-hour WWE Workout Experience and an exclusive meet and greet session with the WWE superstar. Let’s just hope you can keep up with The Big Guy. He takes his workouts seriously…

Ryback’s no stranger to the spotlight: he was the WWE Intercontinental Champion up until February, and has headlined six pay-per-view events for WWE, four of which were for the WWE Championship.

Ryback started at a young age, so don’t feel you’re not old enough to take part in his training course. Ryback started watching wrestling at the age of eight, and was given the chance when he was a youngster to ring the bell at a live WWE event – this got him into weightlifting and on the path to becoming a professional wrestler.

Tickets are limited, and don’t come cheap (at Dhs1,000) – but you’ll be in for the training session of your life. However, we can’t guarantee that you’ll come out of the gym looking anywhere close to Ryback. 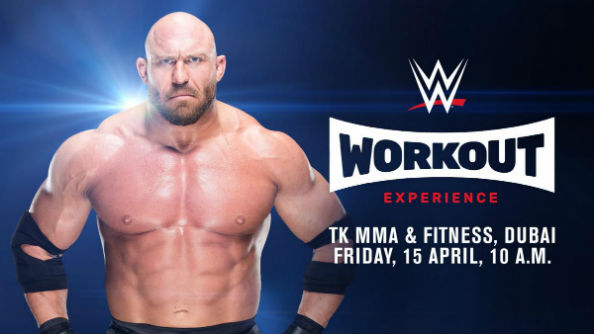 News
Sport & Fitness
Workouts
EDITOR’S PICKS
What’s On Nightlife Awards 2021: Here are the nominees...
READ MORE
It's back! What's On Lock In returns to Media One Hotel
READ MORE
Arts and culture: 5 spots we can't wait to visit at Expo 2020 Dubai
READ MORE
UAE petrol prices are set to decrease in September 2021
READ MORE
MOST POPULAR
Movie review: How good is new sci-fi epic, Dune?
Pics of the week: Your best photos of the UAE
A stylish new Southern-European Neo Bistro is opening in Dubai
Staycation at this stunning hotel which is now dog-friendly
Get an Expo 2020 Dubai monthly pass for Dhs95 valid for the whole of October
YOU SHOULD CHECK OUT
Our website uses cookies and other similar technologies to improve our site and your online experience. By continuing to use our website you consent to cookies being used. Read our privacy policy here.