Kids colour on a Ferrari and Lamborghini in Abu Dhabi

If you’re a car buff, you’ll probably want to look away right now because you’re about to see almost Dhs2 million of horsepower being drawn all over.

Photos showing a Ferrari 458 Italia and a Lamborghini Huracan being used as a children’s colouring station have been going viral on Reddit and Imgur this week (and for obvious reason).

You’d usually find these two supercars parked in front of an equally impressive house, surrounded by similarly impressive cars, not next to ball pits and youngsters with crayons.

In what was either a publicity stunt, or a seriously good advert for somebody’s car cleaning company – one thing’s for sure, drawing on cars worth around Dhs900,000 a pop has definite shock value.

The pictures were actually taken at Custom Show Emirates at ADNEC in Abu Dhabi. 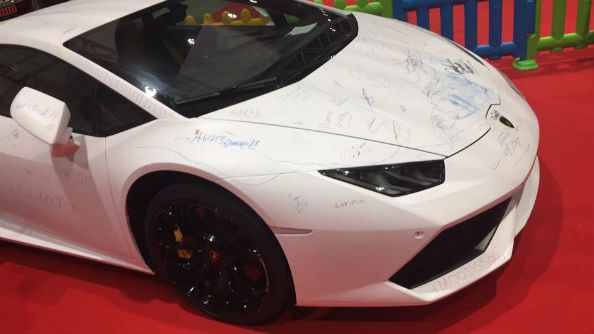 Because crayons and a colouring book are so old fashioned. Photo: Reddit/vj7usa

Check out the video of the UAE’s rendition of Pimp My Ride below:

Where else in the world can kids paint on a Ferrari! #CSE2016

Reddit users have suggested that perhaps a vinyl wrap was used on the car, meaning that after the kids have had their fun the wrap can be peeled off to leave the car as good as new. Impressive.

User /u/TheBoringGentleman made a chuckle-worthy (yet rather sarcastic) point, saying, “Obviously they’re doing this to conserve paper. I think we can all learn something from this.”

You’ve got to give credit to the organisers of the colouring station though. We’ve never seen a tactic as creative as this to keep children occupied during an exhibition. 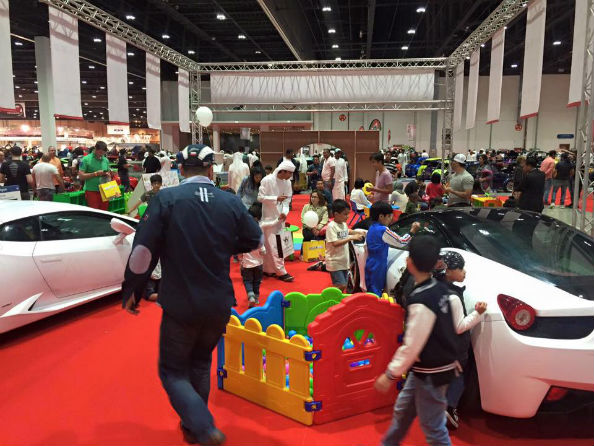 Let’s just hope the young ones don’t leave the show under the impression that all Lambos and Ferraris are fair game for drawing on, otherwise you could find yourself in a pretty hairy situation after leaving your kid next to a three-digit numberplate Aventador as you nip off to pay for parking.

News
EDITOR’S PICKS
13 Sheikh Hamdan-approved restaurants in Dubai
READ MORE
Dubai brunches temporarily banned in new preventative measures
READ MORE
12 upcoming Dubai mega-projects we can't wait for
READ MORE
16 of the best beach bars in Dubai for sundowners
READ MORE
MOST POPULAR
Satisfy your BBQ cravings at selected UAE Rotana hotels to win big prizes
7 worthwhile ways to celebrate Women's Day in Abu Dhabi
You can now buy Marks & Spencer's clothes at Nakheel Mall, Palm Jumeirah
Dine with acclaimed chef Massimo Bottura in Dubai this month
Tuck into Moroccan cuisine at this gorgeous restaurant in Downtown Dubai
YOU SHOULD CHECK OUT
Our website uses cookies and other similar technologies to improve our site and your online experience. By continuing to use our website you consent to cookies being used. Read our privacy policy here.