PSA: Sharing photos or videos of traffic accidents is illegal

Take photos of car crashes you spot on UAE roads? You best stop, here’s why…

If you’ve been in the UAE long enough, you’ve probably come across a few car crashes on the highways: in fact, encountering the aftermath of a crash seems like an all-too-common occurrence.

While curiosity may sometimes get the better of some rubberneckers, the UAE’s Ministry of Interior has warned that snapping photos or videos of traffic accidents and circulating them on social media “is deemed irresponsible behaviour and shows the lack of positive spirit among the citizenry. It is also a violation of the law.”

The act of recording and posting imagery of traffic accidents is ‘contrary’ to the UAE’s Islamic concept of tolerance, and the Ministry have stated that the feelings of the relatives of the deceased and injured must be respected.

“The circulation of these images is unacceptable as it can cause psychological shock to parents when they view such images.”

People found to be guilty of circulating such images or videos on social media can face serious action for doing so.

Basically, don’t be this guy: 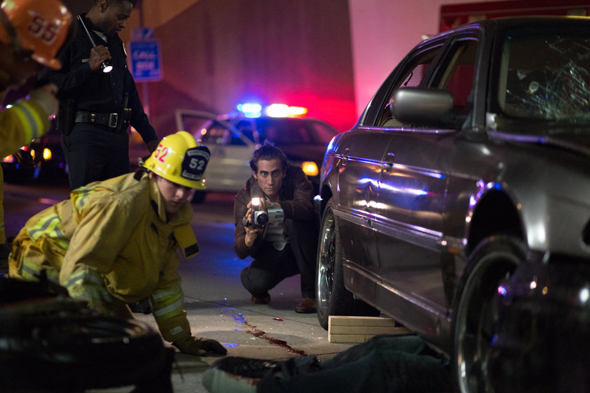 This is Jake G in Nightcrawler in case you didn’t get the reference (great movie BTW).

*MORE: Snapchat has blocked more content in the UAE*

The announcement comes after a recent traffic accident at a McDonald’s outlet in Ajman, which saw two fatalities and five wounded. Photographs of the scene later found their way onto social media sites.

Major Fawaz Al Abdullah, Director of Security Media Department at the Ministry of Interior said how such images violates the privacy of others, and that “police authorities were keen to disclose the circumstances surrounding the accident in a transparent and credible manner without any delay once necessary investigations were completed to inform public opinion about its findings.”

Social media laws are strict throughout the Gulf states. Last week, Saudi Arabia stated how invading the privacy of, defaming or harming others on social media can result in a one-year prison sentence and a fine of up to Dhs490,000.

News
EDITOR’S PICKS
Ain Dubai will open with fireworks, live music and a drone show
READ MORE
Incredible Aura SkyPool to open in Palm Tower this November
READ MORE
Brit Grand Slam hero Emma Raducanu confirmed for Mubadala Tennis
READ MORE
What’s On Nightlife Awards 2021: Here are the nominees...
READ MORE
MOST POPULAR
This Squid Game-themed pool party has house drinks for Dh1
Why Bagatelle's Halloween event is a nightlife ReDvolution
Dubai 2040: Hatta will be home to sustainable hotels, motels, bicycle tracks and more
Spend your Halloween at SoBe's spooktacular extravaganza
Abu Dhabi: Formula 1 will have a 'full capacity' crowd
YOU SHOULD CHECK OUT
Our website uses cookies and other similar technologies to improve our site and your online experience. By continuing to use our website you consent to cookies being used. Read our privacy policy here.