Dubai makes an appearance in new action role-playing game Deus Ex: Mankind Divided. How? It’s the setting of one of the game’s missions.

You play as Adam Jensen in the year 2029 – he’s an ex private security officer who now works with Interpol to take down terrorists with special powers. 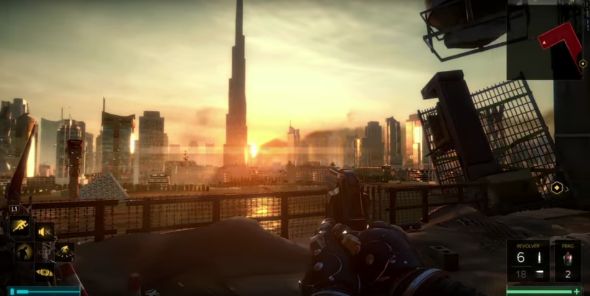 It’s okay though, because Adam’s got special powers too. Think x-ray vision and shooting lightning out of your hands. Just the usual.

The mission centres around capturing notorious arms dealer John Sheppard, who’s been somewhat of a naughty boy and plans to sell millions of dollars worth of arms to a fictional Iraqi smuggling cartel.

The deal’s looking to take place inside an abandoned hotel just off the coast of Dubai called the Desert Jewel. (And no that’s not a real hotel.)

The Desert Jewel on the right – not a real hotel.

Dubai does rank rather high on the futuristic-looking-city scale. There’s just one teensy concern…

Did anyone on this game’s development team even go to Dubai? Watch the below gif carefully…

If you look closely at the beginning, they’re just flying past the tip of the Burj Al Arab… So why is the Burj Khalifa a few miles down the road behind it?

Oh and sure, it looks like the Burj Khalifa, but why is it right next to the beach? Did the Dubai Canal burst its banks?

The Burj Khalifa! Now with an even better ocean view.

What are all these islands off the coast?

Why does the Burj Al Arab look like it’s in Deira?