Sheikh Mohammed on how Dubai can reach its "next stage"

He’s ready to bring change to Dubai and move the city forward. Here’s some proof…

Sheikh Mohammed is on a roll.

First H.H Sheikh Mohammed, Ruler of Dubai, shook up a government department a day after discovering empty desks, then he oversaw a plan to revolutionise the UAE’s public schools system and yesterday he held a brainstorming session with his team about how Dubai can continue to move forward to its “next stage”.

Sheikh Hamdan was at the session too.

“We need new thinking and new blood and different ideas for a new phase in the growth of the UAE,” Sheikh Mohammed told the group at his office in Emirates Towers.

During the meeting new ideas and projects that will help boost the service level of government departments were brought up and Sheikh Mohammed implored his team to think collectively and have an open dialogue to help boost productivity.

“A government job is a lifelong mission to serve the people,” he told them, bringing up the late Sheikh Zayed bin Sultan Al Nahyan and the late Sheikh Rashid bin Saeed Al Maktoum as examples of people “who devoted their lives to the progress of the country”.

Sheikh Mohammed went on to implore those present to “work for the UAE and always strive to raise the living standards of our citizens and our country’s competitive level”.

OTHER CHANGES HE HAS MADE THIS YEAR

– Earlier this year he shook up the UAE government, appointing a Minister of Happiness, a Minister of Tolerance, and a 22-year-old Minister of Youth. “The changes [in the UAE government] reflect what we have learned from events in our region over the past five years. In particular, we have learned that failure to respond effectively to the aspirations of young people, who represent more than half of the population in Arab countries, is like swimming against the tide,” the leader explained in an open letter about the changes.

– In June Sheikh Mohammed announced a plan to create 27,000 jobs in Dubai by 2030. Read all about that – and which industries will see the job creation – here.

– This Ramadan Sheikh Mohammed announced an initiative that donated more than five million books to needy children around the world. “Combating ignorance is the fastest route to combating poverty,” explained Sheikh Mohammed of the programme.

– In March he pledged Dhs5 billion to help boost the lives of millions, particularly those in the Arab world. The Global Endowment Vision of Dubai fund will help those of all ethnicities, nationalities and religions. The money will be used to develop knowledge and education, help boost research in important areas (including the medical field) and aid social causes across the Arab world. It will help those who cannot afford education, medical treatment and access to transport in the region. Fast fact: in 2015 the UAE was the country across the globe that donated the most to foreign aid in terms of percentage of Gross National Income. 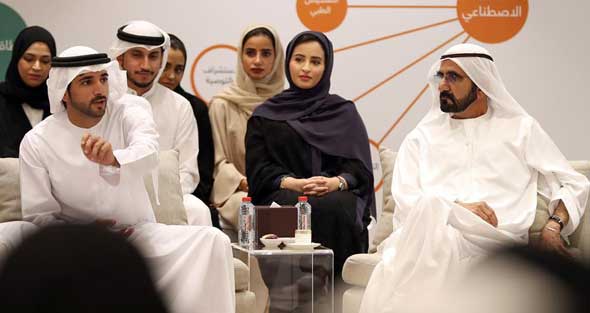 – And late last year he announced the “smart majlis” – a website in both Arabic and English where you can submit ideas that you think will help the emirate. Why? Well, as Sheikh Mohammed explained on Twitter, he wanted to “build the best city in the world”.

What’s next? We’ll keep you updated, and we look forward to seeing how the changes in Dubai government filter down to improve life in the emirate.

News
EDITOR’S PICKS
Ain Dubai will open with fireworks, live music and a drone show
READ MORE
Incredible Aura SkyPool to open in Palm Tower this November
READ MORE
Brit Grand Slam hero Emma Raducanu confirmed for Mubadala Tennis
READ MORE
What’s On Nightlife Awards 2021: Here are the nominees...
READ MORE
MOST POPULAR
The best places to watch the spectacular Ain Dubai fireworks show
This brunch serves up delicious Arabic dishes and non-stop captivating entertainment
This contemporary modern restaurant offers a new take on Arabic cuisine
McGettigan's to open 18,000sq ft venue in City Walk very soon
Rag’n’Bone Man is coming to Dubai in November
YOU SHOULD CHECK OUT
Our website uses cookies and other similar technologies to improve our site and your online experience. By continuing to use our website you consent to cookies being used. Read our privacy policy here.