Had a minor scrape on the road? It happens. Thing is you won’t have to queue up at the police station to report it anymore.

Those without a smartphone or internet access can go to a petrol station and report an accident through an ENOC employee without having to go to the nearest police station.

Rashidiya Police Station are training 15 ENOC employees to report minor traffic incidents on the Dubai Police app (which people can currently use themselves to report minor scrapes and incidents). The system will be initially rolled out at three stations.

ENOC employees who can help you report an accident will wear a reflective yellow vest with the Dubai Police logo.

The aim is to raise more awareness of the police app and reduce the wait time and number of visitors at police stations.

WHERE CAN I FIND THE SERVICE?

The following petrol stations will soon offer the service 24/7: 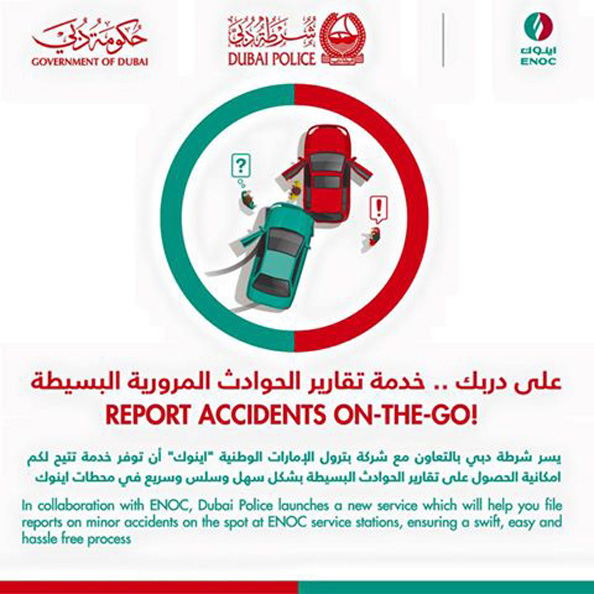 “We chose those three stations because most minor accidents occur on roads near them according to our traffic statistics,” explained Brigadier Saeed Hamad Bin Sulaiman, director of Al Rashidiya Police Station.

“If the results are a success, we will recommend this to the authorities at Dubai Police, so after its approval it could be applied to various stations across the city.”

Currently, road users are required to register any accident that has taken place. This is done via phone, through a police station or using the Dubai Police app.

A slip is then issued to show who was at fault in the accident that can be shown to insurance companies.