The UAE's answer to Burning Man?

OK, sure, it’s unlikely to be quite as epic as the original Nevada Burning Man, but we’ll certainly still be going…

If nightclubs closing at 3am is a little early for you, you’re in luck: Soundopia, a 24-hour non-stop music festival (the UAE’s first) is coming to RAK.

The somewhat Burning Man-esque fiesta is set to take place at the Relax RV Camp in Ras Al Khaimah on September 29 to 30.

The whole thing kicks off at 6pm on Thursday until 6pm on Friday, or as their Facebook page says ‘until the last person drops’.

You can camp, however it may be a little difficult to sleep with constant tunes being pelted out on a 25 thousand Watt sound system. 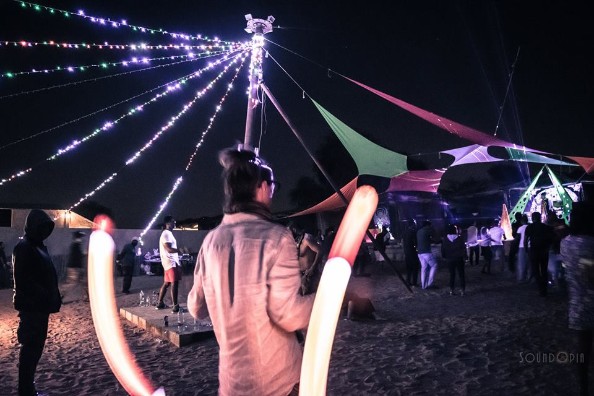 Expect people with those fire-ball on a string-things. (PS: These pics are from a previous Soundopia event.)

However, if you are looking for a little bit of peace and quiet, there’ll be a deep house and techno club inside the camp which will be playing chill-out music in an air-conditioned zone.

There’ll also be a fully-kitted out kitchen and bar offering up burgers, fish and chips and the like, as well as cheap beverages.

Pets are allowed, whole families are welcome (including kids), and they’re promising that the male and female toilets have recently been fully renovated (that’s always an important aspect of a festival, let’s be honest).

As far as parking goes, the camp is easily accessible via car. You don’t need an SUV – any car is fine.

“But it’s going to be hot,” we hear you say. Not necessarily. The temperature’s forecast to be a slightly more comfortable 28 degrees Celsius.

Also, art is encouraged. Be it in the form of painting, hula hooping, juggling, or any other kind of performance art.

What are the details again?

Dress code? None. Come as you are – whatever you feel comfortable in.

More information can be found on Soundopia’s Facebook page here.