Review: Carnival, the Indian eatery that's all about the fun

Can the food live up to the fun at this Indian fusion restaurant?

It’s not every day your welcome party consists of a waiter armed with a child’s bubble gun. But that’s just the thing with this inventive Indian eatery – you quickly learn to expect the unexpected.

This DIFC newcomer is the much-hyped little brother to Tresind, the molecular gastronomic extravaganza at Nassima Royal Hotel. But where the original is all about super-modern dishes served up in a slick fine-dining scene, Carnival is more like a Bollywood remake of Willy Wonka.

The clues are there from the beginning – rainbow-hued kites peek out from gilt-glazed trees, a miniature carousel sits atop a copper-lined, glass-encased table, and a moodily lit entranceway is lined with festive paper parasols. The overall effect makes it feel as if you’ve stepped into the dark-wooded home of a fancy interior designer, albeit one with two kids under the age of five.

So where does the food fit into this wonderland? Well, as the name suggests, this is more like a night at the theatre than a pit stop at a Karama curry house – and that sentiment extends to the fare. 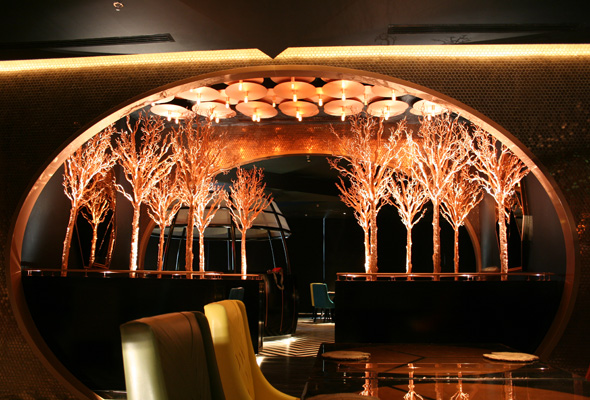 We delved in with a 16-course degustation menu (Dhs375 per person) designed to evoke childhood memories through reimagined street food dishes (admittedly, if you didn’t grow up in nor have visited India, some of this nostalgia will be lost on you). However the servers set down every plate with a brief tale of the dish’s inspiration, so you never feel out of the loop.

As one would expect with that many dishes, not everything could be a standout star. Highlights included the pleasingly named Life Is Short, Eat Dessert First (Dhs70 for full portion), a satisfyingly crispy, deep-fried jalebi (a bit like a sugar-soaked pretzel) nestled on a bed of masala-cooked chickpeas and yoghurt mousse. The yoghurt cut beautifully through the piquant legumes in a dish that was sweet, spicy, savoury and sour all at the same time.

We enjoyed the Dal Phulka (Dhs61), an intense, toeing-the-line-of-too-salty dhal “cappuccino” topped with cumin powder, and were won over by the playful dramatics of the Vada Pao Service (Dhs90), as a hard-hat-wearing waiter opened his toolbox to load up a fresh bun with a smashed potato patty, mint and tamarind sauce, and shaved coconut. Can Bob the Builder fix it? If the problem is an empty stomach, he absolutely can.

We would have happily welcomed encores of both beef dishes; the Utterly Butterly (Dhs132), with its succulent strips of wagyu tenderloin lathered in Amul butter and presented with chilli-flecked cheesy toast, was a particular triumph. The Kashmiri-influenced T-bone (Dhs286), served with morning glory and fiery onions, was equally as flavoursome with its hearty chargrilled notes. 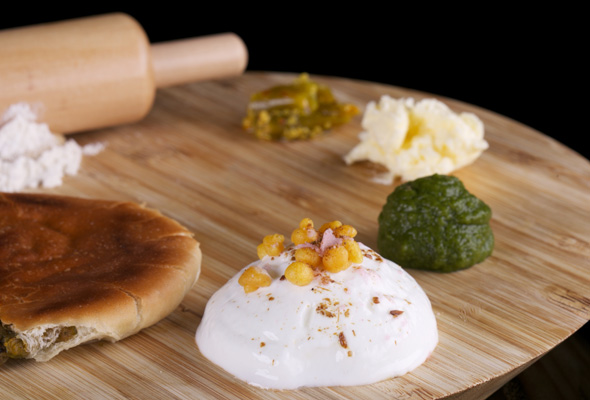 There were commendably few let downs, however, the Vegan Carpaccio’s (Dhs65) cured strips of fruit languishing in a soy and tamarind sauce were an unhappy marriage of texture and cloying, pungent taste. Yet kudos must be given for catering to all dietary requirements – indeed, substitutions to embrace our own allergies were made with no fuss.

Even after this three-hour affair, we recommend keeping room for pudding as the Go Bananas (Dhs72) is unmissable – a deconstructed banoffee pie comprised of a wobbly, not-at-all-sickly toffee panna cotta, aromatic banana ice cream, and a caramelised sliver of the fruit still in its skin.

As we departed, our tongues were still tingling from the final course – a lone tablet which, when sucked, made the accompanying slice of lemon taste syllabub sweet.

It’s this kind of whimsical wizardry, paired with a knack for faultless presentation, which best sums up Carnival – it’s the kind of place where you fall down the rabbit hole before you’re fed. And, much like Alice, we’re already thinking about a return journey.

Eat & Drink
Restaurants
EDITOR’S PICKS
What’s On Nightlife Awards 2021: Here are the nominees...
READ MORE
It's back! What's On Lock In returns to Media One Hotel
READ MORE
Arts and culture: 5 spots we can't wait to visit at Expo 2020 Dubai
READ MORE
UAE petrol prices are set to decrease in September 2021
READ MORE
MOST POPULAR
Pics of the week: Your best photos of the UAE
How to use Playkey.me, the region's first supercharged cloud gaming service
The Mai Dubai half marathon is back in October
Exhibitions, workshops and more to experience at Sharjah Art Foundation
New Irish pub McCafferty's opens second venue in Dubai
YOU SHOULD CHECK OUT
Our website uses cookies and other similar technologies to improve our site and your online experience. By continuing to use our website you consent to cookies being used. Read our privacy policy here.