Sheikh Mohammed now has a major road named after him

The 62 kilometre-long road starts from the end of Sheikh Mohammed bin Zayed Road and stretches to the Sweihan Road in Abu Dhabi, and it’s just been announced that the road will be named after the much beloved Sheikh Mohammed bin Rashid Al Maktoum, who is the ruler of Dubai and Vice President of the UAE.

Sheikh Mohammed bin Rashid road has four lanes on either side, and the capacity to host 8,000 vehicles an hour.

So if you often find that Sheikh Zayed is congested, this should provide a good alternative.

WHERE IS THIS NEW ROAD? 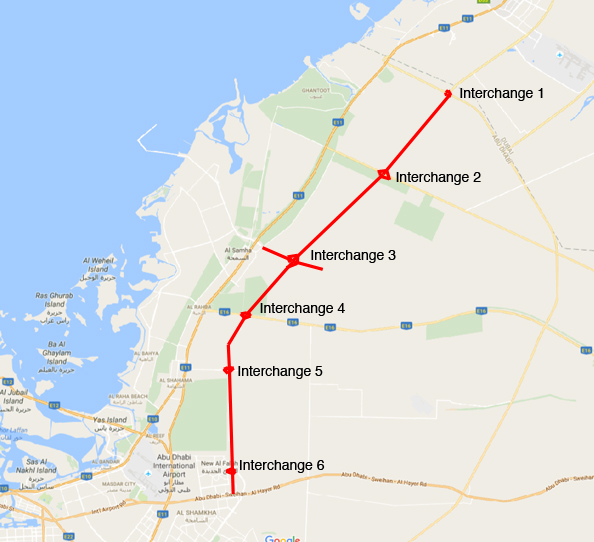 As far as safety features go, the road is lined by 800 environmentally friendly lights, as well as six lay-bys for emergency use.

Sheikh Mohammed bin Rashid Road also features a rainwater drainage system (for the rare occasion it does rain) and a fence on both sides to protect from crossing herds.

Petrol-station-wise, the road will feature one on each side of the road, situated between interchanges one and two.

More…
*Here’s what (and who) causes the most road accidents in Dubai*
*This Dubai road is going to be closed until February*
*One day you might be able to catch the Dubai Tram to Satwa*
*If you use these roads, you need to know about a new Dhs600 fine*

“The new motorway will form a strategic link that will provide additional capacity to traffic movement, particularly during peak hours,” Shamsa Al Shamsi, project manager of the E311 road extension told the The National.

“It will help to improve traffic flow between Abu Dhabi and Dubai, shorten the trip time between the two cities and ease traffic congestion.”

News
Transport
EDITOR’S PICKS
Ramadan in Dubai: 48 iftars to try
READ MORE
Where can Dubai residents travel? Check out these 14 destinations
READ MORE
Rumours, facts and reveals: New Abu Dhabi bars and restaurants
READ MORE
UAE announces reduced working hours for Ramadan 2021
READ MORE
MOST POPULAR
Review: Rainforest camping at The Green Planet Dubai
The rules for children wearing face masks have been updated in UAE
Etihad sale: Surprise gift boxes and a chance to win 50 times your airfare
Break your fast in style at W Dubai - The Palm this Ramadan
Yoga and art combine in Dubai's newest immersive fitness class
YOU SHOULD CHECK OUT
Our website uses cookies and other similar technologies to improve our site and your online experience. By continuing to use our website you consent to cookies being used. Read our privacy policy here.