If you use these roads, you need to know about a new Dhs600 fine

You better sit up and pay attention to this news, unless you fancy a Dhs600 fine…

Do you regularly pass through Al Ghubaiba Road? What about Al Mamzar?

Well if the answer to either (or both) of those is yes, then listen up.

From the end of this month, dedicated lanes for RTA buses and taxis will be implemented on both roads – and those who flaunt the rules will cop a hefty penalty.

Private vehicles who use the lanes will be fined Dhs600 for every violation of the new rule.

However there’s one bonus – in order to let motorists get used to the change, no fines will be handed out between now and October 30.

But from October 31, you better keep in the correct lane.

Vehicles allowed to use the new dedicated strip are public buses, taxis, police cars, ambulances, and civil defence vehicles, while private cars can only stray into the lane while entering or exiting a side road or parking areas.

For this, drivers get a grace distance of 20 metres, and automatic number plate recognition cameras have been installed along the roads to catch rule-breakers.

“Offences are reported either automatically through these cameras, or manually through Dubai Police patrols,” said Abdullah Yousef Al Ali, CEO of RTA’s Public Transport Agency. “If the motorist is fined twice (automatically and manually) for the same offence, only one fine will be collected.” 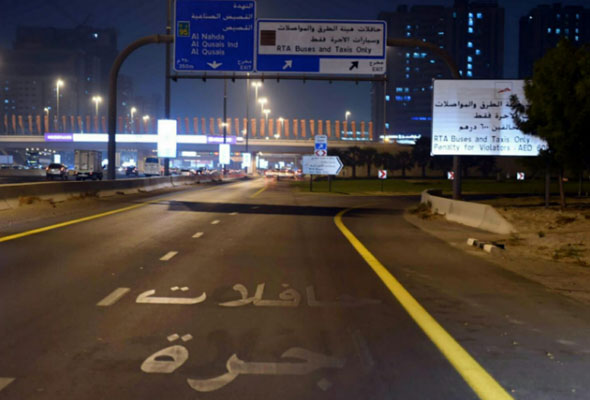 The system’s already working in Dubai

The latest announcement forms Phase 2 of the RTA’s plan – Phase 1 was introduced in April 2015.

The same cameras and dedicated lanes were set up on Naif Road, and violations dropped an impressive 88 per cent as a result.

This obedience also meant that buses increased their speed by 20 per cent – a great boost to Dubai’s public transport network, and a counteractive measure to the city’s traffic congestion.

The RTA now plans to create more dedicated lanes in the near future.

“The implementation plan will commence by the end of this year and will extend for two years that will target the high congested areas in Deira and Bur Dubai districts,” Al Ali told Gulf News.

News
Transport
Travel
EDITOR’S PICKS
Ain Dubai will open with fireworks, live music and a drone show
READ MORE
Incredible Aura SkyPool to open in Palm Tower this November
READ MORE
Brit Grand Slam hero Emma Raducanu confirmed for Mubadala Tennis
READ MORE
What’s On Nightlife Awards 2021: Here are the nominees...
READ MORE
MOST POPULAR
13 of the best places for glamping in the UAE
Emma Raducanu sends a message to her UAE fans
Parisian celebrity hotspot Caviar Kaspia has opened in Dubai
Here's what you'll be eating at SushiSamba when it opens in November
Chic Mediterranean beach bar Ula is now open on the Palm Jumeirah
YOU SHOULD CHECK OUT
Our website uses cookies and other similar technologies to improve our site and your online experience. By continuing to use our website you consent to cookies being used. Read our privacy policy here.