Yes, Motiongate is open, but not all of the rides are yet...

Dubai Parks & Resorts, the enormous theme park near Jebel Ali is now almost all open. Here’s a guide to what’s open and what isn’t…

All of the rides at Legoland (bar one) are now functioning, and many of the shops at the dining and shopping spot Riverland are open too.

Bollywood Parks is open (although the Don ride isn’t open yet) and the Hollywood-themed Motiongate has opened! But not all of the rides are ready yet (scroll down to see what is open and what isn’t yet). 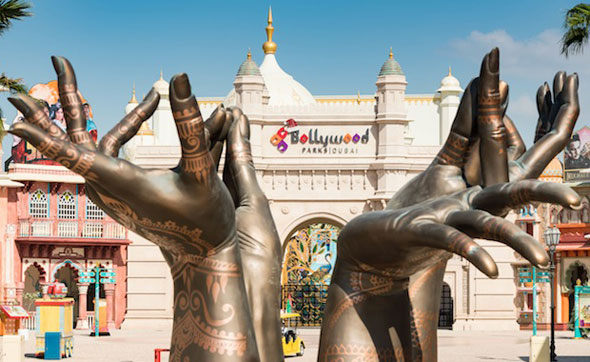 Legoland Water Park and the Lapita Hotel are still not quite open – we’ll keep you updated on those, don’t worry. We’ve been told the hotel is basically ready to go, it’s just a matter of opening its doors – here’s what a room there looks like… 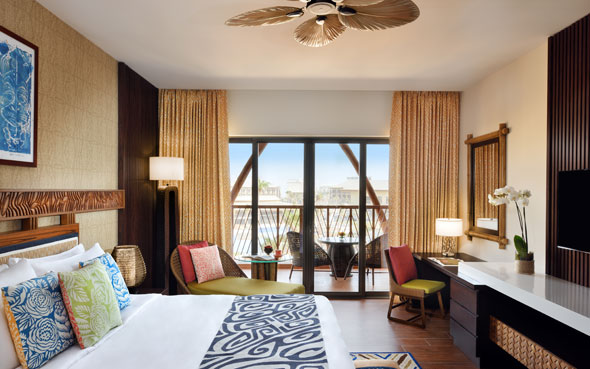 Oh, and side note, the Riverland dining and shopping area is free to enter, no tickets needed, so it will be a new spot for Dubai residents to regularly visit. Here are all of the restaurants and shops you’ll find there (they’re not all open yet, however).

We called Motiongate today (December 18) and they didn’t have a full list of what rides are and aren’t open – but when we toured the park on the weekend, these were the rides that were functioning then and those that weren’t….

Here’s what the team at DPR have to say about what will open when: “New rides and attractions within the DreamWorks zone are becoming available for their guests every day and the Lionsgate zone will be open in early 2017.”

The main rides at the Sony Pictures Studios zone…

This ride is in a 2,800 square metre indoor space and is seven minutes long. The ride is ‘trackless’, and there are 27 separate carriages going around at once, which means you’ll never know which way you’ll turn and you’re likely to have near-misses with other punters. The highest point of the ride is 42 metres (about the same height as the Statue of Liberty). The ‘story’ of the ride is a surprise party hosted by the monsters in the movie.

2. The Cloudy with a Chance of Meatballs ride NOT OPEN

This ride is being called a River Expedition. Here’s the description of it: “A splashing water rapids family ride, where guests voyage through Swallow Falls aboard an inflatable raft”.

This is dubbed Blast Off, and is a drop tower – you know one of those rides that shoot you up and down – that has you escaping from a hoard of zombies. The height? A gut wrenching 58 metres (to put that into perspective, the Fairmont Hotel on Sheikh Zayed Road is 153m, so you’ll basically be shooting up and down a third of that building).

This one’s being called Battle For New York, and is an interactive and dark ride that also involves a shooting game – you have to shoot at various targets to gain points. Ooh, we love the competitive angle. 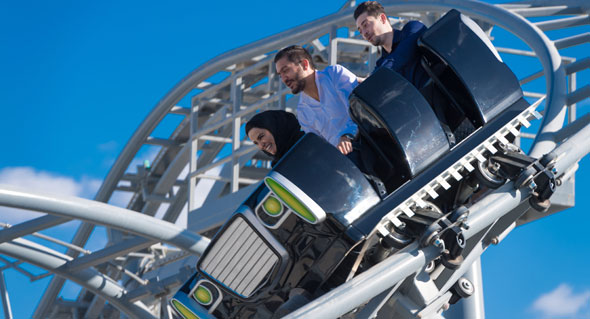 This is a fast-paced rollercoaster called the High Speed Chase: get ready for sharp turns and dizzying drops.

A 4D theatre ride – meaning a movie screening during which your seat moves and vibrates and you also get sprayed with mist, air and the like.

The main rides in the Lionsgate zone…

1. The Hunger Games Train NOT OPEN

This is called the Capitol Bullet Train (remember the high speed train Katniss takes to the Capitol in the movies?) and will be a scary-as roller coaster that will launch you in all sorts of directions (probably when you least expect it). It’s being dubbed “360 degrees of thrill”.

Called the Panem Aerial Tour, this will be a 3D motion simulator during which you’ll feel like you’re riding a soaring hovercraft.

There is also a stage show in this zone themed around Step Up (the movie franchise that introduced Channing Tatum to the world). You can expect live hip hop dancers, singers and rappers. 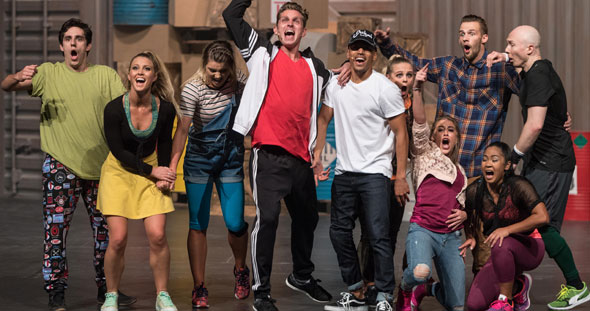 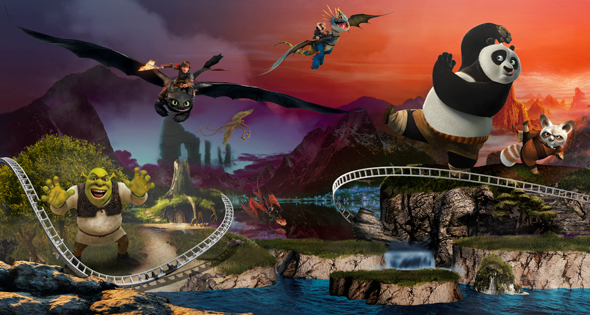 1. The Shrek Ride NOT OPEN

This ride is called the Merry Fairy Tale Journey, and it is in the dark, but it doesn’t sound scary as it revisits the story of how Shrek and his Mrs, Fiona, met. Aww. Ooh, and apparently there’s an interactive element too. There is a second Shrek ride called the Swamp Celebration (that is open) – a family affair during which you sit in a hollowed-out log that glides and spins.

2. The Madagascar Ride OPEN (our top pick of the ones we’ve tried so far)

Called the Mad Pursuit, this is a “white knuckle roller coaster”. It’s the fastest in the park. The route is windy and full of sharp turns (so no curly fries just before it perhaps). There will also be a family-friendly carousel based on the movie, as well as another kid friendly ‘hang glider ride’.

Called Unstoppable Awesomeness, this will be a 3D theatre experience full of special effects. Oh, but the classic teacup ride based on Kung Fu Panda is open.

4. The How to Train Your Dragon Ride NOT OPEN

This will be a suspended rollercoaster (whatever that is) that soars high above. We’re guessing it might feel like flying a dragon? There wil also be a How To Train Your Dragon water play area, perfect for families.

5. The Swinging Viking NOT OPEN

Also based around How To Train Your Dragon, this will be a Viking ship that glides back and forth (a total theme park classic).

There will also be a fountain in this zone with a water and light show called the Fountain of Dreams (but will it impress as much as the Dubai Fountain?).

The main rides at the Smurfs Village… 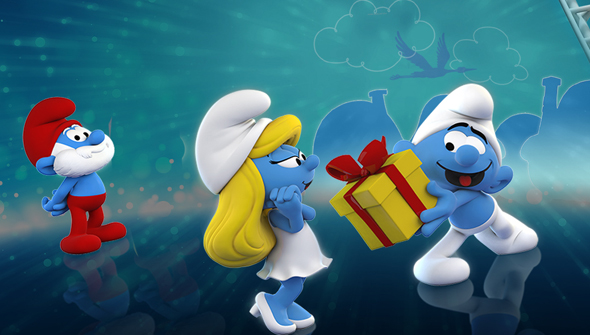 This will be a family ride on which you’ll see inside the Smurfs’ working studio.

This is a rollercoaster, yes, but not a scary one – it’s a family-friendly trip through Smurf Village.

This will be an adventure playground with rope bridges, slides and mushroom-shaped houses.

Here’s a guide to where the different zones will be…

How much do tickets cost? 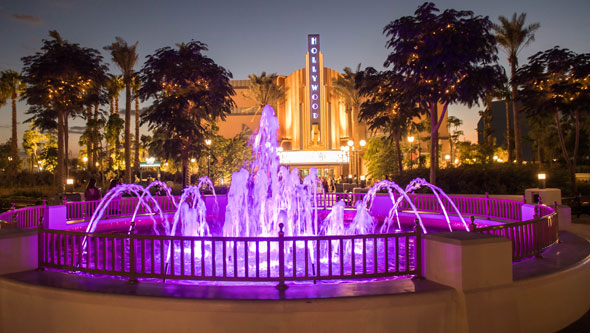 Motiongate Dubai: One day pass is Dhs280 for children and seniors, Dhs330 for adults, Dhs865 for annual pass.

Bollywood Parks: One day pass is Dhs245 for children and seniors, Dhs285 for adults, Dhs755 for annual pass.

One-day pass for all parks: Dhs430 for children and seniors, Dhs480 for adults.

Two-day pass for all parks: Dhs650 for children and seniors, Dhs730 for adults.

Three-day pass for all parks: Dhs765 for children and seniors, Dhs870 for adults.

Four-day pass for all parks: Dhs790 for children and seniors, Dhs890 for adults.

VIP tickets are priced at Dhs1,500 per park per day, giving guests access to queue skipping, a personal tour guide, as well as discounts on food and beverage and retail.

As a comparison, tickets to the just-opened indoor theme park IMG Worlds of Adventure are Dhs300 for adults, Dhs250 for children under 1.2 metres and it’s free for those under 0.9 metres.