Dubai is getting a game-changing Dhs30 billion sewerage system

It’s money gone to waste, and we’re not even mad about it.

Ok, we know this isn’t exactly the most sparkling conversation starter for your water cooler chat, but hear us out. Dubai is planning a brand spanking new deep-tunnel sewerage system, which should be completed by 2025.

It may not be the most glamorous change, but it will make a huge impact on the city, and how it functions. It’s not going to be just any old sewerage system – oh no. The Dhs30 billion project has been dubbed the “development of the century”, according to the official news agency, as it is expected to save millions of dirhams in maintenance costs and help Dubai towards its goal of becoming the world’s most sustainable city.

And yes, it will mean fewer of those ‘sweet water’ trucks on the roads too, so it should really ease up traffic.

We’ll be saying goodbye to the days of long lines of orange trucks on the UAE’s highways once this system is finished.

ALSO READ:
Everything we know about Dubai’s new Metro route
Yes, night swimming is now allowed at this Dubai beach

The system will involve the construction of two tunnels deep beneath the city, supported by 140km of link sewers and key pumping stations. One will start in Bur Dubai and transfer sewage to the Jebel Ali treatment plant, and the other will start in Deira, and run through to the Al Warsan treatment plant.

As you can see, it’s going to be a pretty huge project: 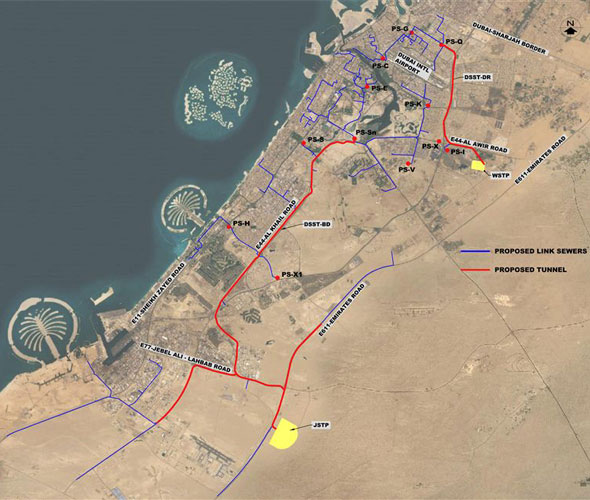 Considering this will all take place about 90 metres beneath your feet, what will it actually mean for you?

Well, Dubai is an extremely fast-growing city, and it’s reassuring to know that our waste infrastructure will be able to keep up with the, erm, demand over the next century. The system will be similar to that of other megacities around the world, like Singapore.

The government has said there will be minimal disruption, but we can definitely expect some roadworks and construction as the system is put in place.

The tunnel system will also replace more than 121 existing sewage pumping stations, which means tankers (aka “poop trucks”) will no longer need to transfer waste across the city.

A storm water drainage scheme is also in the pipeline.