Downtown Dubai is getting a new attraction called Sky Walk

Walk among the skyscrapers at 200 metres high…

It’s been an exciting couple of weeks for adrenaline junkies in the UAE. First, we learned the world’s longest zipline will be opening in Ras Al Khaimah in December. Now, it’s just been announced that Downtown Dubai is getting a brand new attraction called Sky Walk.

Suspended on the 53rd floor of the Address Sky View development, visitors will be strapped into a safety harness and taken up to the observation corridor at 200 metres high – where they will proceed to walk outside the building, on a 30-metre-long cantilever.

Emaar Properties said a team of more than 300 engineering, construction and design experts has been working for over a year to make Sky Walk a reality.

“Appealing to adventure seekers, Sky Walk will add to the touristic appeal of the city and offer visitors a never-before experience,” said Mohamed Alabbar, chairman of Emaar Properties.

While the structure has already been lifted into place (no mean feat, considering it weighs more than 350 tonnes), it likely won’t be open to the public until the Address development is complete, which is scheduled for 2018.

One thing is for sure though – it will boast spectacular views of the Burj Khalifa, the Dubai Fountain and the Downtown skyline.

Sky Walk isn’t the only hair-raising new attraction in the works, either.

Last year, it was announced that a 1,000ft high wire adventure skywalk – the Dare Skywalk – is being constructed on the tallest tower of the AYKON City development, which will sit along the Dubai Canal. 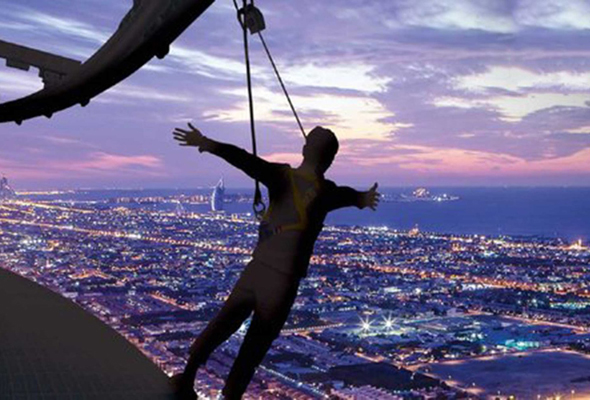 Accessed from the 78th floor, those trying the Dare Skywalk will be strapped into harnesses and taken onto a landing platform before walking up the outside of the building and up onto the rooftop.

While an opening date hasn’t been released for that attraction yet either, we think it’s probably time to overcome our acrophobia…