This weekend the Roads and Transport Authority (RTA) opened a new Deira-bound bridge making access to the airport a lot quicker and easier for drivers.

It makes up part of the Airport Street development Project and affects passengers coming from Sheikh Mohammed Bin Zayed road.

ALSO READ:
A major new diversion will open on Airport Road tomorrow
Yes, the weather in Dubai is finally starting to cool off

According to the RTA, this will reduce the travel time on Airport Street from Sheikh Mohammed Bin Zayed Road to Casablanca Street from 30 minutes to just 5 minutes.

It should also hopefully decrease the waiting time at Marrakesh street intersection. The RTA says this should now have gone from 7 minutes to less than one minute. 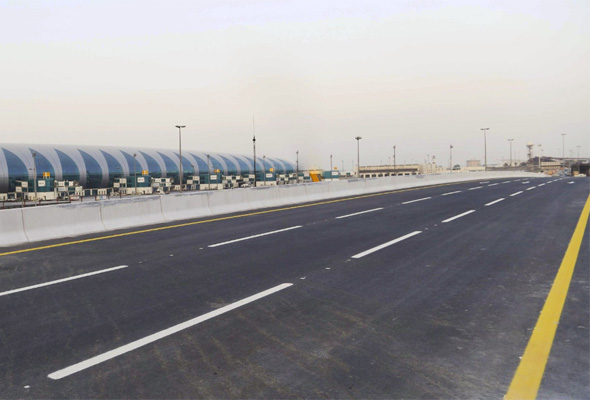 The bridge, which is three lanes wide, will also increase the capacity of Airport street by 5000 vehicles per hour.

It is part of a larger scale improvement to the area around the airport which is expected to receive 92 million passengers by 2020.

The Dhs490 million project also comprises of the construction of further bridges, a service road and a tunnel at the intersection of Marrakech which all aim to improve safety and speed up waiting times.

So hopefully this will mean a lot less time stuck in queues when heading to the airport.

News
Transport
EDITOR’S PICKS
UAE holiday dates announced for Eid Al Adha
READ MORE
Emirates extends suspension of flights from India to UAE again
READ MORE
Coming soon: Everything we know about Ain Dubai so far
READ MORE
Khorfakkan set to open new tourist attraction 580 metres above sea level
READ MORE
MOST POPULAR
A completely spoiler-free movie review of The Suicide Squad
Review: It's chilled vibes all the way at Jumeirah Islands Clubhouse
Review: Carna Dubai, a vibrant steakhouse 74-storeys high
Pics of the week: Your best photos of the UAE
New films to watch in cinemas this week: August 5 to 11
YOU SHOULD CHECK OUT
Our website uses cookies and other similar technologies to improve our site and your online experience. By continuing to use our website you consent to cookies being used. Read our privacy policy here.