In April 2019, Sharjah was selected by UNESCO to be the host city for World Book Capital (WBC) which is an initiative to encourage and promote publishing activities.

WBC comes to a close this April, 2020 and to commemorate UNESCO’s recognition of the city’s ongoing cultural journey, Sharjah will open a state-of-the-art public library, aptly named House of Wisdom.

The House of Wisdom, which is located on the Sharjah International Airport Road, sits amidst landscaped gardens, and already contains The Scroll – a visually striking artwork which was unveiled when Sharjah was announced as host city for WBC.

Here’s what you’ll find at the House of Wisdom when it opens:

The House of Wisdom will be a two-storey building and home to more than 105,000 books and will blend traditional and digital sources of knowledge. It will be open to the public of all age groups and nationalities.

The 12,000 square metre space will feature iconic design elements and contemporary Arabic architecture. The library will be ‘high-tech’, including interactive facilities and will also feature a large floating roof. 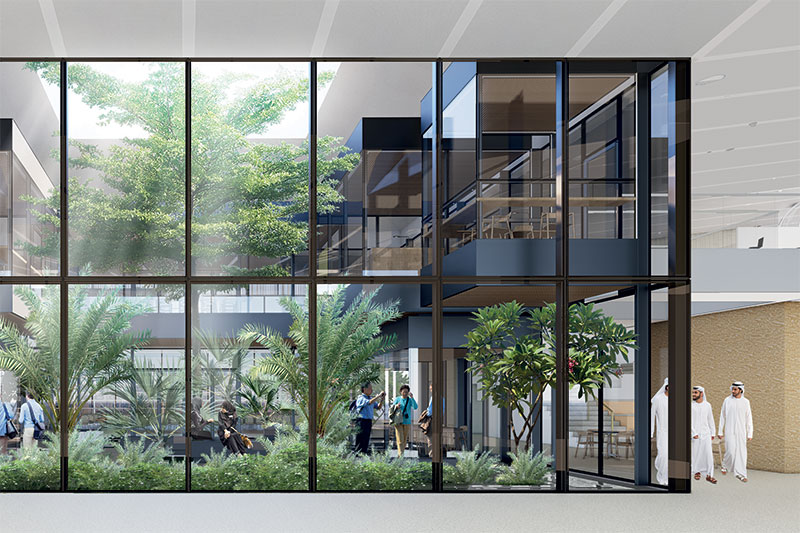 The overhang design of the building will be 15 metres wide to provide shade on the facade of the structure through most of the day and aluminium screens with differing densities filter the low sun in the evenings.

During the late afternoon when the sun is at its lowest, movable screens are deployed to preserve the connection to the landscape gardens – a reoccurring feature seen throughout the entire structure.

The upper floor will host a series of pod spaces suspended above the central courtyard to offer visitors a place to collaborate or even a quiet space away from the hustle and bustle of the city. This floor will even feature an exhibition area as well as a prayer room and a women-only area. There will even be a children’s education space, a fabrication lab and a cafe. 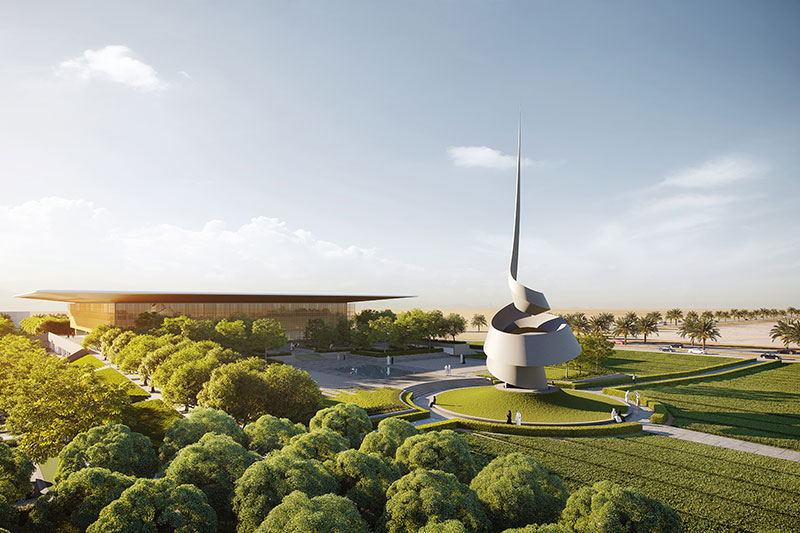 The exterior which already contains The Scroll in the north, will also feature a knowledge garden, children’s playground, a water feature and a geometrically arranged garden.

The Scroll, which was unveiled back in April 2019 at the start of WBC, is a striking monument designed to look like an ancient Arabic scroll looping 36 metres towards the sky. Its design was inspired by an ancient scroll design that represented the lasting power of books and how reading shares a strong purpose of uniting people together.

We can’t wait to visit the library when it opens in April!

Culture
EDITOR’S PICKS
13 Sheikh Hamdan-approved restaurants in Dubai
READ MORE
Dubai brunches temporarily banned in new preventative measures
READ MORE
12 upcoming Dubai mega-projects we can't wait for
READ MORE
16 of the best beach bars in Dubai for sundowners
READ MORE
MOST POPULAR
TikTok launches local food guide to help you decide #WhereToEat
8 great things to do in Abu Dhabi this Weekend: March 4 to 6
10 of the best spa deals in Dubai right now
Here’s your chance to meet one of the world’s top chef in Dubai
Be part of the conversation at Culture Summit Abu Dhabi 2021
YOU SHOULD CHECK OUT
Our website uses cookies and other similar technologies to improve our site and your online experience. By continuing to use our website you consent to cookies being used. Read our privacy policy here.