UAE residency visas: What the new rules mean for you

If you’ve been sitting on an expired visa or Emirates ID, it’s time to get moving…

Now, the Federal Authority of Citizenship and Identity (ICA) has cancelled that decision, and all expired visas and Emirates IDs must be renewed over the coming weeks.

The UAE Cabinet issued a number of amendments to the decisions isuued recently in their Identity and citizenship sector#ICAUAE #IdentityandCitizenship #UAE pic.twitter.com/MLNSMQBAJE

Here’s what the UAE visa rules mean for you

As of July 11, the free extension process has been cancelled.

From July 12, ICA will now start collecting the standard fees for visa and Emirates ID renewal.

If you’re an Emirati, GCC citizen or UAE resident who’s been stuck outside the country (for less than six months), you will be given a one-month grace period to renew your visa or Emirates ID once you re-enter the UAE.

If you’re an Emirati, GCC citizen or UAE resident who’s been in the country since the outbreak began, you’ll have a three-month grace period to renew your documents.

If you are outside the country for longer than six months, there will be a grace period based on when air travel resumed between the two countries. This timeframe will be determined by ICA.

Once these grace periods and deadlines pass, normal fees and fines will apply. If you’re in the country, a fine of Dhs25 applies for residency visa violations. When leaving the country, the fine is Dhs250 plus Dhs25 per day. Failure to renew your Emirates ID is Dhs20 per day. Fines won’t apply to the previous exemption period.

In order to start the mammoth task of renewing the expired documents, the ICA will be performing renewals in batches. Check the ICA table below to find out when you’re application is due. 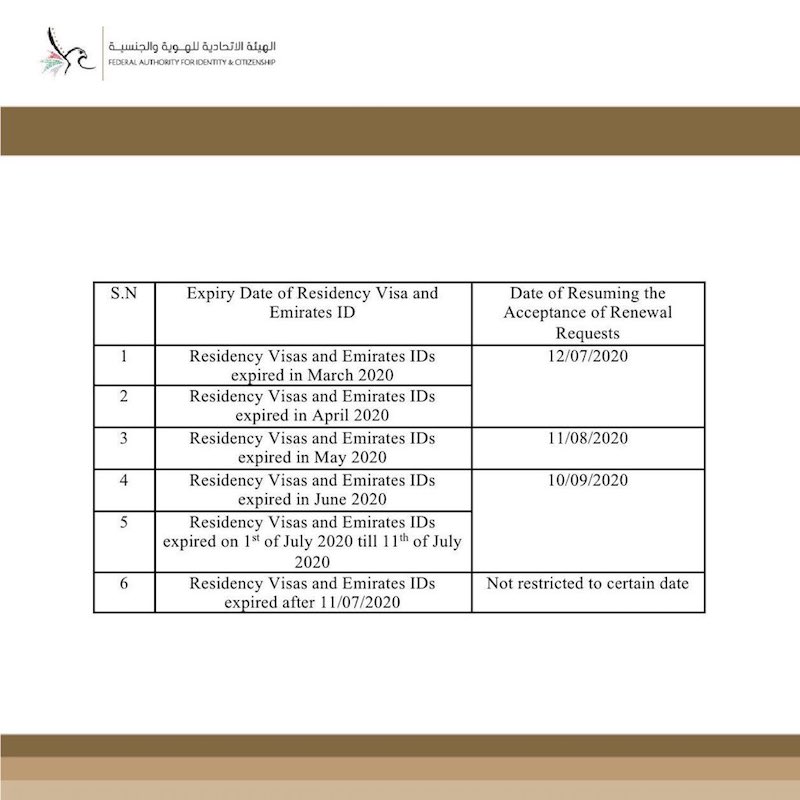 For enquiries, contact the ICA via Twitter. To check the status of your visa, for Dubai residents, visit: smart.gdrfad.gov.ae/Public_Th/StatusInquiry_New.aspx. For all other UAE residents, visit: ica.gov.ae/en/home.aspx