Including the return of Khabib for UFC 254…

Tonight we’ve received official confirmation from the Department of Culture and Tourism — Abu Dhabi (DCT) that both UFC 253, UFC 254 and three other Fight Nights will take place on Yas’ Fight Island, between September 26 and October 24.

Including the return of Khabib Nurmagomedov, to defend his UFC Lightweight Crown and further cement his reputation as one of the sport’s all-time greats.

After the huge success of the first pandemic-proof Fight Island festival back in July — which kicked off with UFC 251 and was followed by three further big Fight Nights — we were always fairly sure, we’d see big MMA battles back in Abu Dhabi soon.

And despite the fact that these fights will again be spectatorless, this is a huge endorsement for Abu Dhabi as a top location for hosting important sporting events. Abu Dhabi will be the first location outside of Las Vegas to host back-to-back UFC numbered events.

This will only be the second time in UFC history two undefeated males will face off against eachother.

Also proposed for the night are: A featherweight bout between Hakeem Dawodu and Zubaira Tukhugov Flyweight; as well as a flyweight battle between Kai Kara-France and Brandon Rovyal.

The first Fight Night will take place on October 3, and will be headlined by a contest between UFC Women’s Bantamweight Champion Holly Holm and promising contender Irene Aldana.

Fight Night two on October 10 will be lit up by a main event featuring on-from male Bantamweight combatants Marlon Moraes and Cory Sandhagen. Sandhagen is on a seven-fight win streak, and Moraes is yet to fight since his stunning split decision win over UFC legend Jose Aldo in UFC 245.

October 17 is the date for the third and final Fight Night will give top billing to the featherweight contest between Brian Ortega and Chan Sung Jung  “The Korean Zombie”. 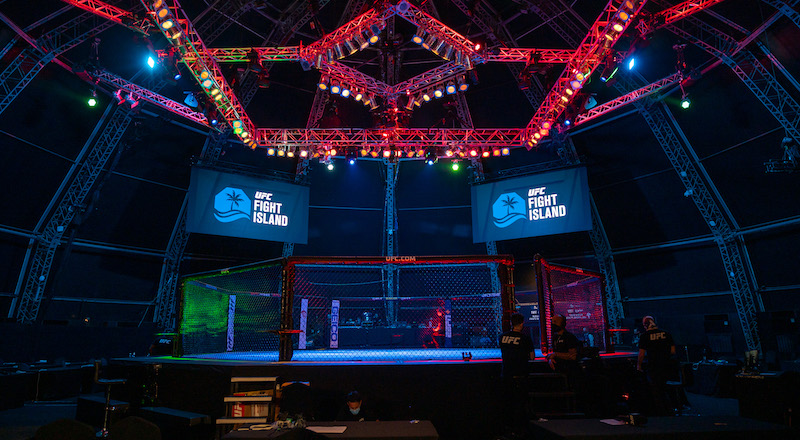 But the truly exciting news is the potential UFC 254 card. As long as everyone proposed for the night, stays fit, travels and makes weight — this event, on October 24, could go down in history as one of the championship’s biggest ever nights.

As Khabib Nurmagomedov put it (and simultaneously lending legitimacy to the rumour he’ll be headling the fight) on his own Twitter account, it’s a “card full of killers”.

2 champion, 4 former champion, 4 title challengers. How do you like this card with full of killers. Best card of the year. #ufc254 pic.twitter.com/iVs2LRORWw

The Khabib Nurmagomedov vs Justin Gaethje fight is something local fight fans will be getting very excited about. Russian-Muslim fighter Khabib enjoys huge support in the region, his dislike for trashtalk, cool, calm demeanour and respectful ways are rare, beautiful things in the world of MMA.

Here's a look at the safety measures in place on UFC Fight Island
Going out with a bang: UFC Fight Island events set to end on a high
DCT launches 'Go Safe' certificate system for Abu Dhabi attractions

There’s also the fact he is one of the sport’s GOATs, 28 wins (20 of which were either knock out or submission), and zero losses.

And if we also get to see Tony Ferguson back in action, Rodriguez, Whittaker’s return to the island, Poirier, Zabit, Cannonier, Makhachev and Dos Anjos. Wow, what a wonderful card it could be.

Talking about the events, Dana White, UFC President said the “return to UFC Fight Island will showcase some of the best fights of the year, including one that I’ve predicted has ‘Fight of the Year’ potential.  This stretch of fights is going to be insane and I can’t wait.”

UAE fans will be able to watch all the fights via the welcome.ufcarabia.com app.

Before getting into the Safe Zone, there’s a mandatory period of quarantine and of course a negative Covid-19 test. There’ll also be regular testing conducted for everybody inside the ‘bubble’ throughout the series.

Culture
Events
News
Sport & Fitness
Things to do
EDITOR’S PICKS
13 Sheikh Hamdan-approved restaurants in Dubai
READ MORE
Dubai brunches temporarily banned in new preventative measures
READ MORE
12 upcoming Dubai mega-projects we can't wait for
READ MORE
17 of the best beach bars in Dubai for sundowners
READ MORE
MOST POPULAR
President Sheikh Khalifa releases 439 prisoners ahead of Ramadan
100 million meals: Sheikh Mohammed launches the largest campaign of its kind
Social by Heinz Beck transforms from fine dining to fun dining
Where can Dubai residents travel? Check out these 14 destinations
Etihad to give away 50,000 prizes as part of UAE jubilee year celebrations
YOU SHOULD CHECK OUT
Our website uses cookies and other similar technologies to improve our site and your online experience. By continuing to use our website you consent to cookies being used. Read our privacy policy here.