Despite facing a global pandemic and experiencing the postponement of Dubai Expo 2020, the Roads and Transport Authority (RTA) have succeeded in completing its new metro route on time. The Expo 2020 station and route will serve additional communities which have a population of 270,000, making it easy for more people to use public transport. 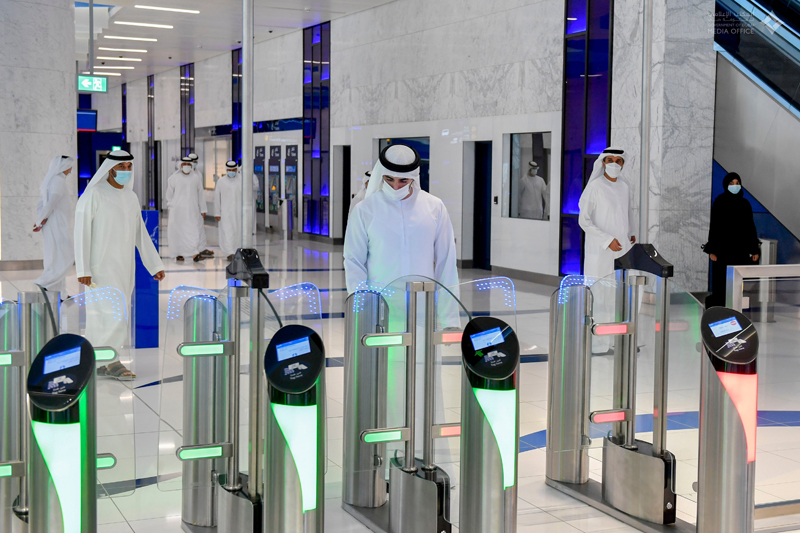 The 15 kilometre extended track runs both overground and underground, and interchanges with the red line at Jebel Ali metro station. HH Sheikh Mohammed toured the station, which spans 8,800 square metres and can serve up to 320,000 passengers per day.

Throughout his ride.. HH Sheikh Mohammed toured all of the new stations, as well as the interior revamped train itself. The Expo 2020 Station boasts a unique design featuring the wings of an aircraft which symbolises Dubai’s future aspirations and its focus on innovation.

Today, I visited the Expo 2020 metro route. We learnt from @HHShkMohd to not let changes divert us from our main goal and we are committed to continuing our preparations to welcome @expo2020dubai guests, thanks to a team that accomplished so much despite the current situation. pic.twitter.com/tcxDmspx5r

“Dubai Metro today serves as the backbone of the public transport system in the emirate, connecting various vital areas. The Metro has transformed the way Dubai’s population travels within the city and plays a key role in supporting the city’s sustainable economic development, reducing carbon emissions and helping enhance people’s living standards,” His Highness said.

Expo 2020 Dubai
Royals
Transport
EDITOR’S PICKS
UAE holiday dates announced for Eid Al Adha
READ MORE
Update: Emirates again extends suspension of flights from India to UAE
READ MORE
Coming soon: Everything we know about Ain Dubai so far
READ MORE
Khorfakkan set to open new tourist attraction 580 metres above sea level
READ MORE
MOST POPULAR
Sign your kids up for a five-day theatre camp at The Junction this summer
Pics of the week: Your best photos of the UAE
New films to watch in cinemas this week: July 22 to 28
Caesars Palace Dubai transforms into a summer playground this Eid
10 things to do in Dubai that are free (or cost next to nothing)
YOU SHOULD CHECK OUT
Our website uses cookies and other similar technologies to improve our site and your online experience. By continuing to use our website you consent to cookies being used. Read our privacy policy here.