What’s On vs Wild…

Like many of you out there, I’ve been an armchair fan of Bear Grylls for a long time…

I’ve watched almost all of the British adventurer’s TV outings, captivated by the sight of him sliding down the side of glaciers, plunging from the footrail of helicopters onto uninhabited islands, corraling the most coddled of celebrities and, from the comfort of my air-conditioned, Deliveroo-serviced home, I’ve tutted audibly as he’s made countless questionable food and beverage choices.

But never was any of this survivalist spectating accompanied by any level of FOMO. Until 2020.

With the Mad Max origin story that’s currently raging outside of our doors — knowing how to survive in the wilderness, no longer feels like such an eccentric indulgence.

Which makes the opening of The Bear Grylls Explorers Camp in Ras Al Khaimah feel suspiciously prescient. It’s the first permanent home of the Bear Grylls Survival Academy in the UAE, a camp that offers survival training, an insight into bushman skills, and as close as we’ll ever probably come to a legitimate reason for wearing a bandana in public. 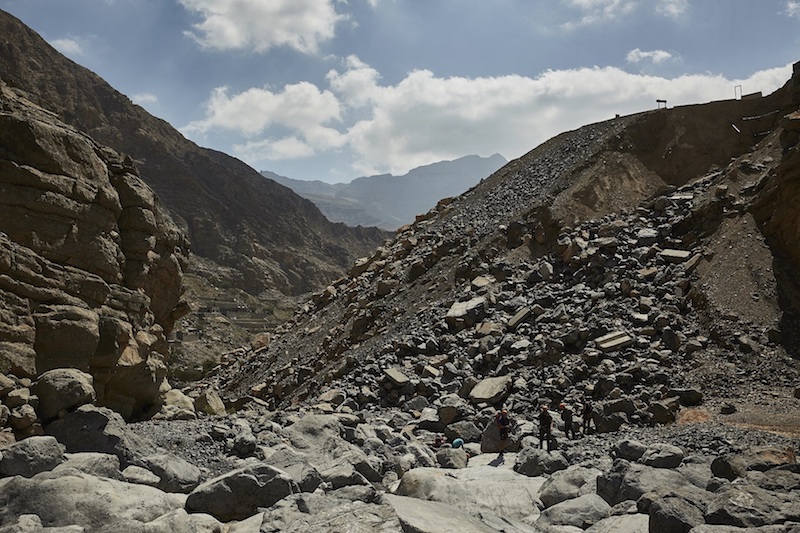 So, when the invite came in to experience the camp, I barrel-rolled at the chance. And less than a week later, there I was, bleary-eyed in the painfully-early morning mountain haze, a stone’s throw away from Jebel Jais’ notorious Via Ferrata ascent.

My fellow adventurers are a keen crew of media types, amongst the very first to see if they can ‘make like Bear’ and stand tall against Ras Al Khaimah’s testing elements.

During a discussion over the barbecued breakfast, it’s clear that everyone is up for the challenge. And despite feeling quietly smug about my own sleeve full of Scout badges, I remind myself that they were obtained in an entirely different century.

An orientation session is led by charismatic instructors Martin and Leon. In between the dad jokes and playful banter, they display a clear passion and belief in the endeavor. This isn’t a playground after all, we’re here to learn respect for, and to embrace the wild. 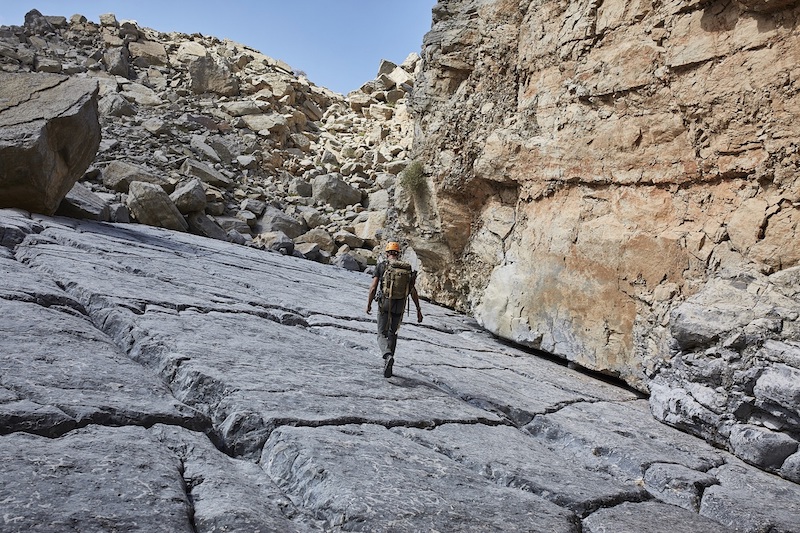 At around 6.30am we set off on our trek across a parched wadi, we stop at certain intervals to survey the land and to learn valuable lessons about navigation and the core principles of ‘not dying in the great outdoors’. It goes way beyond the kind of things you might have learned in your be-woggled youth, and is tailored specifically to the environment we’re in.

“Remember the rule of three” Martin says “You can last three weeks without food, three days without water but only three seconds with a bad attitude”. It’s relayed with the authority of a man that has spent extended periods in real-life precarity, hanging off the side of mountains, machete-ing through jungles and instructing teenagers. 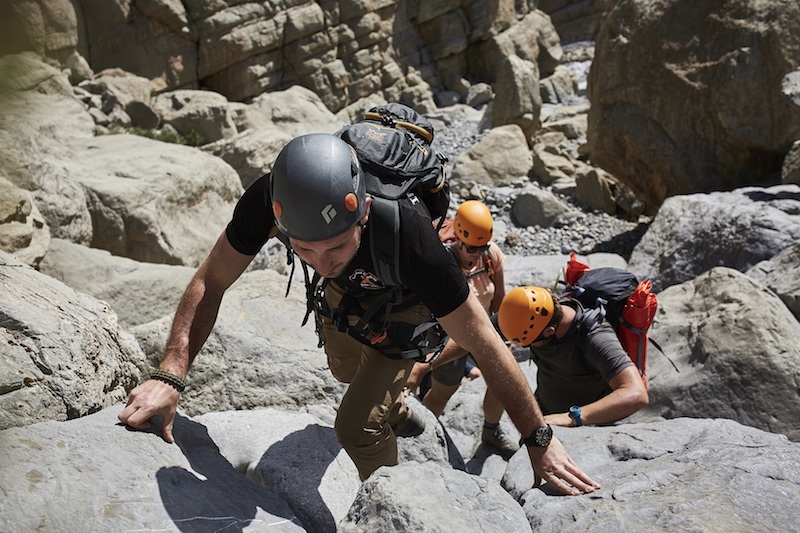 We scramble uphill over valley-strewn scree, beyond the curious gaze of on-looking goats to our first designated checkpoint, a knife-skills session with Ben. He’s calm, but appropriately wary. Media folk are an unpredictable breed.

We’re guided through the basics of the blade, taught about the preservation of blood-bubbles, and warned against placing the knife between our teeth in order to go off and ‘scout the perimeter’. We learn how to, safely, whittle rudimentary wooden pegs from fallen acacia twigs.

Something, he winks ominously, we might need to use later. 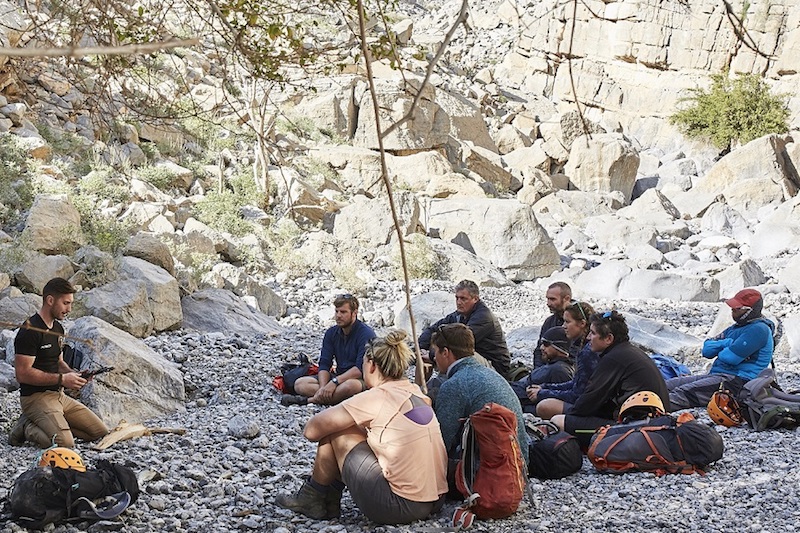 Further up the path, a young and knowledgable instructor named Jake teaches several methods for making fire, without resorting to matches or a lighter. Fire, Jake tells us, is ‘Nature’s TV’, a quote he attributes to Bear himself  — and we sit, transfixed by the opening scenes of promethial glow.

Time for a little snack. But of course, this is Bear’s house, and they don’t do tea and biscuits. Instead we’ve got dried mealworms, served on a bed of granite. We each take a small pinch of invertebrate and Leon counts down our collective trip to flavour town. Gulp. Not that bad actually *nods head approvingly* reminiscent of a dry roasted peanut. But with a gritty aftertaste that lingers on the palate.

Our next stop on the survival school field trip is with master of knots, Tom. We learn a few vital, genuinely life-saving rope tricks, culminating in the complicated Alpine Butterfly. It’s not ‘how long a piece of string is’ that’s important, it’s knowing what to do with it, and each knot lends itself to a particular problem-solving application. 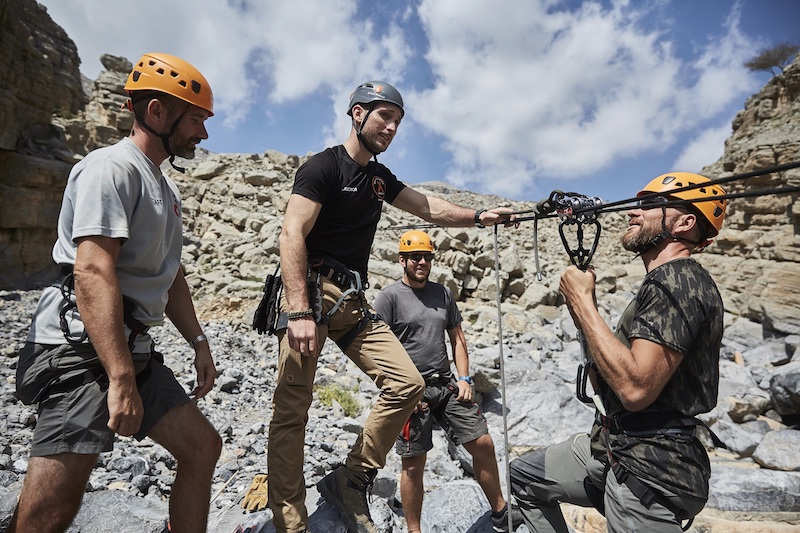 Knots completed, on we march, up the loose rocks of the wadi floor. It’s now about 9am and the sun is peeking over the striated valley ridge. Then Martin and Leon explain we’re about to put everything we’ve learned so far to the test with a survival simulation.

We’ve crash-landed in Ras Al Khaimah, we need to build a shelter, find water, a method to catch food, start a fire and come up with a way to signal for help. Our group is split into two teams and we’re given 15 minutes to complete the tasks.

Bearing in mind this just a simulation, there’s a surprising amount of adrenaline pumping around our circulatory systems, as the recently upgraded survival instincts kick in. It’s a scramble, part methodical, part chaotic, but as if channeling inspiration from Bear himself, a plan begins to form.

Both teams complete the challenge within time, which means that rescue should be assured. It is, we’re told, but first we’ll have to make our way to the extraction zone.

The rendez-vous point is inconveniently placed halfway up a steep incline one side of the valley wall. One by one the survival squad are cheered on, up the rope towards safety and hopefully, a cooling sip of something sweet.

At the top, it turns out that our would-be extractors are on the opposite side of the valley, which means we have to individually rappel down a sheer cliff face, complete with a gnarly overhang. This was one of the main highlights of the day’s events, adventure and a perch offering the chance for an intimate moment with nature. One that we city-dwellers would be wise to seek out from time-to-time. 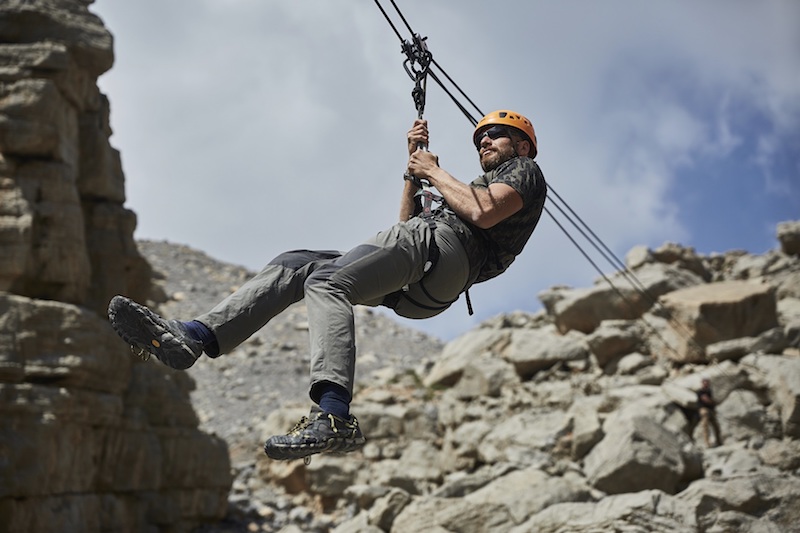 Jubail Mangrove Park to reopen next week with exciting new additions
An Alpine-inspired toboggan ride is coming to Jebel Jais next year
Where to go glamping in the UAE, from beach huts to luxe caravans

Once at the bottom there’s a final, exhausting climb up the rocky crag of a sharp escarpment. The instructors barking encouragement to our tiring limbs for one last push.

The summit looms, and though it’s many kilometeres shy of Everest’s stature – the mounatin that Bear Grylls became the youngest Briton to conquer, just 18 months after suffering injuries that medics told him meant, he’d never walk again – the feeling of accomplishment upon reaching the top is intense.

Survival? Completed it mate. And I even have the certificate to prove it.

Verdict: I would place this close to the top in the list of activities I’ve enjoyed most in the UAE. It’s an experience filled with fascinating tips and insight, demanding challenges, opportunities to commune with nature, and invaluable training for any potential looming zombie apocalypses. 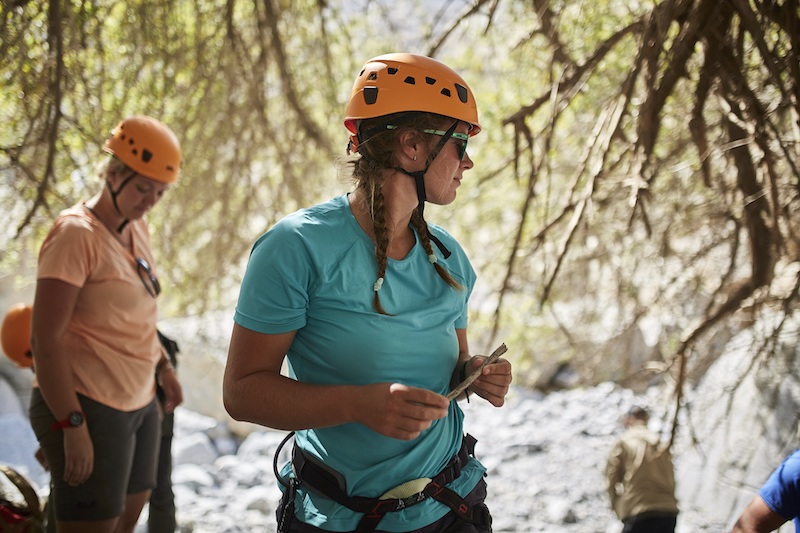 Bear Grylls Explorers Camp in Ras Al Khaimah is open to the public from October 16. Accommodation for overnight stays will also be launching in 2021. The half day experience (the one we tested) is just Dhs450, there are also eight hour sessions and a 24 hour experience available at Dhs1,300. Tel: (056) 317 3958, beargryllscamp.ae

Outdoor
Sport & Fitness
Staycations
Things to do
Travel
EDITOR’S PICKS
Bla Bla: Dubai's huge new beach club is set to open this Thursday
READ MORE
16 of the best beach bars in Dubai for sundowners
READ MORE
Watch: A look inside Conor McGregor's Dhs20,000 per night Dubai villa
READ MORE
Where to get the Covid-19 vaccine in Dubai, Abu Dhabi and across the UAE
READ MORE
MOST POPULAR
A huge off-roading adventure park will open in the UAE this February
In pics: Sheikh Hamdan shares incredible photos of the Dubai fog
Need a few laughs? These comedians are coming to Dubai in February
Is David Guetta going to perform in Dubai? It looks like it...
Amazonico Dubai launches new brunch and rooftop after-party
YOU SHOULD CHECK OUT
Our website uses cookies and other similar technologies to improve our site and your online experience. By continuing to use our website you consent to cookies being used. Read our privacy policy here.